The collection of one of Ireland’s most important artistic families of the last century will be offered for sale at Sotheby’s in London on September 27. Illuminating the private world of the Yeats family, the auction will comprise literary material, paintings, drawings and the personal effects of artist John Butler Yeats and his four children: poet W.B, embroidery designer Lily, printing press pioneer Lolly, and artist Jack.

The sale will not only cast new light on the artistic development of these important figures, but also reveal a little of what life was like inside the Yeats family home. Alongside significant paintings, letters and drawings are unseen family sketch books, a family scrapbook, illustrated ‘scribbling’ diaries, photographs, hand-decorated furniture, Jack’s model boats, personalised silver, a top hat, a hand-painted trunk, and the family dining table.

Additional works from the Yeats family collection will be offered in Ireland by Fonsie Mealy Auctioneers, in November and December, at Castlecomer and Dublin.

A spokesman for the family said: “Our family has enjoyed these items for many years. We are delighted that they will now be exhibited and available for everyone to see in Dublin and in London and for collectors to have the opportunity to acquire their own piece of Irish history.”

Charlie Minter, Head of Irish Art at Sotheby’s, said: “This is an intimate, personal collection of many never-before-seen works that shed light on the fabled Yeats family, their influence and personal connections. All the family are represented in this sale. There is a particularly impressive group of works by John, too often the forgotten father of the Yeats family. His work appears rarely at auction; this is our chance to revaluate his pictures and appreciate the great intimacy of his sketches.” 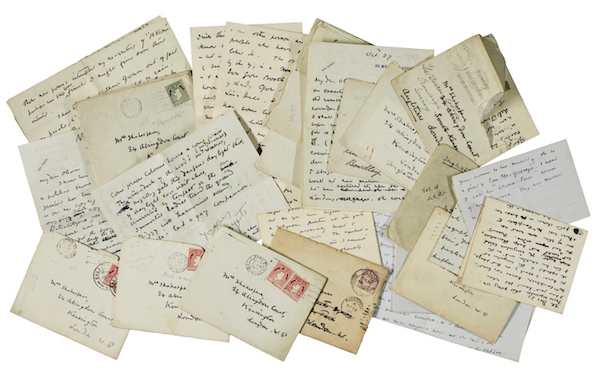 Olivia Shakespear was Yeats’s first lover and the subject of early love poems, but over the decades their erotic entanglement transformed into one of Yeats’s most important and stable friendships. Following her death Yeats commented that “For more than forty years she has been the centre of my life in London”. She was a significant cultural figure in her own right and shared many of Yeats’s intellectual interests; she also introduced Yeats to Ezra Pound and to George Hyde-Lees, who became Yeats’s wife. In this extraordinary series of letters – totalling some 350 pages – Yeats sends her drafts of poems, gives advice on her novels, writes of his work, life, and reading, and describes the changes in Irish politics and society from before Independence through to the 1930s.

On which he would have written many of these letters to Olivia (est. £20,000–30,000 / €22,500–33,800). It was used regularly for his correspondence in later years, a period during which he both wrote some of his most memorable verse, and was newly engaged in Irish political affairs.

The sale will include the largest ever offering of works by John B. Yeats. He is best known for his drawings, of which over 85 are included in the sale along with 11 sketchbooks, depicting his family, the Irish countryside and celebrated contemporaries and friends, such as John O’Leary, Hugh Lane, Sarah Purser and Mary Walker (Máire NicShiubhlaigh). The paintings include his important final self-portrait, commissioned by the New York lawyer, collector and patron of the arts, John Quinn in 1911 (est. £30,000–50,000 / €33,800–56,500).

This self-portrait became somewhat of an obsession for the artist. Though work on the picture began in 1911, it would occupy Yeats for the rest of his life, until his death in 1922. “It fills my life. I have never an idle moment or idle thought. It is a long revel, just as satisfying to me as Gibbon’s Decline and Fall of the Roman Empire, and I think I have been at it almost as many years.” – John Butler Yeats

The Runaway Horse is the most valuable of the 35 artworks by Jack Yeats in the sale (est. £150,000–250,000 / €169,000–281,000). Painted in 1954, and one of his final works, the painting depicts a golden-haired child playing. Towards the end of his career, the theme of memory in his work became more enhanced – here the intoxicating impact of a youthful memory is conveyed not only though the artist’s choice of subject but also in the exuberant way in which he paints it.

About the Yeats family

After a successful early career as a lawyer, John retrained as an artist and went on to work as an illustrator and portraitist for more than five decades. A member of the Royal Hibernian Academy, he was most celebrated for his sketch portraits and counted many Irish luminaries, as well his children, amongst his sitters. After moving his family to London in 1885, he later emigrated alone to New York where he became an influential member of the Irish-American cultural elite. Pictured: John Butler Yeats, Self Portrait holding a palette (est. £20,000–30,000 / €22,500–33,800).

With the publication of The Lake of Innisfree and his collection of poems, The Wind Among the Reeds, W.B. established himself as a brilliant writer of lyrical and symbolist poems. His output was prolific, and his work remains one of the most important Irish contributions to the modernist movement that swept through the 20th century. He was deeply fascinated by the occult. As well as engaging in politics in later life, he also helped found Abbey Theatre, reinvigorating Irish drama as well as poetry and, in 1923, he was awarded the Nobel Prize for Literature. Pictured: John Butler Yeats, William Butler Yeats Reading in the Garden, 1888/9 (est. £8,000–12,000 / €9,000–13,500).

Trained in the embroidery workshop of William Morris’s daughter, May, at Kelmscott House, Lily went on to make her own a significant contribution to the crafts industry with her embroidery designs. Susan’s designs were attuned to the nationalistic fervour of the Celtic revival and the influence of her brother Jack is visible in their bold outline. Her physic abilities were said to have been passed down from the Pollexfen family, through her mother Susan. She was her father’s favourite model. A devoted daughter, she wrote regularly to him during his time in New York. Pictured: John Butler Yeats, Portrait of Susan Mary (Lily) Yeats, 1899 (est. £20,000–30,000 / €22,500–33,800).

Having enjoyed first-hand experience of private printing at Kelmscott House under the tutelage of May Morris, Lolly founded the Cuala Press in 1909 with her sister Lily. Situated south of Dublin, the Press played a crucial role in Ireland’s literary renaissance. Lolly drew material for the Cuala Press from her brothers – first editions by W.B., as well as ballads and poems illustrated by Jack. An accomplished watercolourist who published four brushwork manuals, she went on to influence a generation of writers and women artists. Pictured: John Butler Yeats, Portrait of Elizabeth Corbert,”Lolly” Yeats, 1899 (est. £20,000–30,000 / €22,500–33,800).

Jack lived apart from his immediate family as a boy, and was brought up by his maternal grandparents in the small town of Sligo. In this way, he escaped the manifest intellectual influence of his father and the rest of his siblings. Jack had a strong literary bent as an artist – most of his close friends were writers – and first began his career creating comedic cartoons for the press. He had first turned to oils in 1910, and with a determination to be different from other contemporary artists, he set out to express the fundamental essence of the Irish character. One of the most influential Irish artists of his generation, he fundamentally advanced the history of Irish art because of his originality, and refusal to be trapped by convention. Pictured: John Butler Yeats, Jack in a Straw Hat, 1875 (est. £10,000–15,000 / €11,300–16,900).

One thought on “Yeats family collection for sale”