Ceramics were in demand at Sotheby’s recent Made in Britain sale, celebrating the very best in Modern British Art across disciplines such as paintings, works on paper, prints and photography.

While the total sales realised almost £2.5M, a curated selection charting the journey of ceramics in Britain saw all but two of the forty-six ceramics sold, achieving a grand total of £512,628 more than doubling the pre-sale estimate of £166,400-250,600. 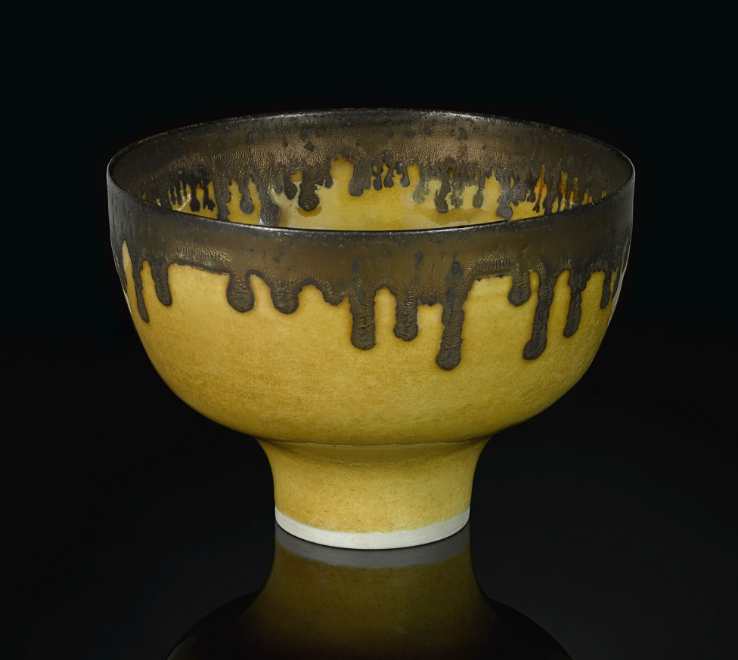 Sales in the ceramics selection were led by Dame Lucie Rie’s striking mustard Yellow Footed Bowl from the collection of the late Emmanuel Cooper, which sparked a three-way bidding battle to sell for nearly thirteen times its pre-sale estimate at £125,000 (est. £8,000-12,000). Cooper, himself a talented potter and the editor of Ceramic Review magazine, was Rie’s biographer – pronouncing her work “timeless and majestic”.

Testament to the enduring appeal and lasting legacy of one of Britain’s most eminent potters, a further ten works by Rie – and two collaborations with her former studio assistant Hans Coper – brought £295,375 (est. £69,600-105,400). Grayson Perry’s Men Have Lost Their Spirits, which appeared at auction for the first time since it was acquired directly from the artist in the 1980s, also soared above expectations bringing £52,000 (est. £20,000-30,000).

An auction records was achieved for pioneering potter Ewen Henderson, whose expressive and textural hand-built form sold for £8,125 (est. £3,000-5,000).

Robin Cawdron-Stewart, Head of Sale, said, “The passion for uniquely British art remains undimmed among collectors from across the globe. Our focus for this season was presenting a selection of the very best in British studio ceramics, and our exhibition celebrated the enormously rich history behind these exquisite pieces. The results seen today in the saleroom reflect how these beloved British ceramicists are increasingly recognised as some of the most important, and covetable, names of the British art scene.”