Summers Place Auctions is gearing up for what looks like a huge sale when a family of four giant mammoths go under the sale with an estimate of £250,000 to £400,000. 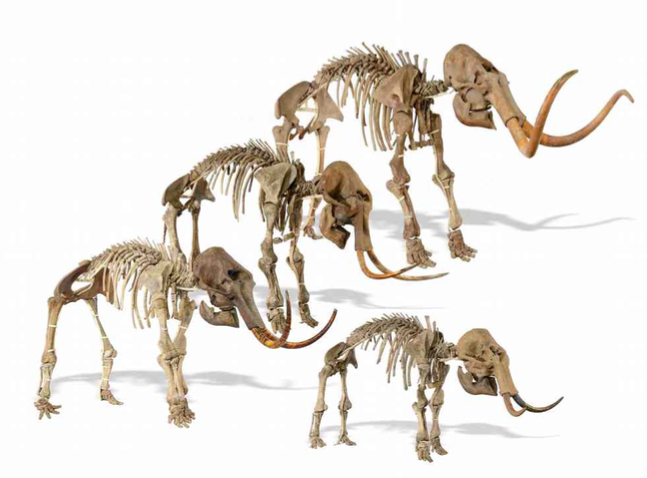 The mammoths will be sold as part of the auctioneer’s 5th Evolution Sale in November and is the first time a family of mammoths has been sold together. The group consists of a male and a female mammoth, a teenage daughter and one-year-old baby. They were all found together during building works near the Siberian city of Tomsk, in the south-west of the great Siberian Taiga in 2002.

Construction workers noticed some bones close to where they had started their work. It looked like the river Chulym had washed away a lot of sand and it turned out that it had exposed some Mammoths’ bones. An expedition was organised by Trias Geo and a family group of four was at the surface and it was decided that they could be easily excavated without harming nature in any way. They became part of the company’s collection and after an exhibition tour through Germany and Switzerland from 2004 – 2007, they are now coming up for auction.

Rupert van der Werff, Summers Place Auctions’ Natural History specialist, says: “I was really excited to see the mammoths as a group for the first time a few months ago, but it was quite a thrill when they arrived in 16 boxes in our gallery in Billingshurst. ‘Building’ a skeleton comes with a lot of challenges, imagine it to be a bit like doing a rather difficult 3-D puzzle. Having sold an individual mammoth in 2014 for £150,000, we hope that this unique family group will find a new home in a museum, a company’s atrium or a private collection somewhere around the world.” 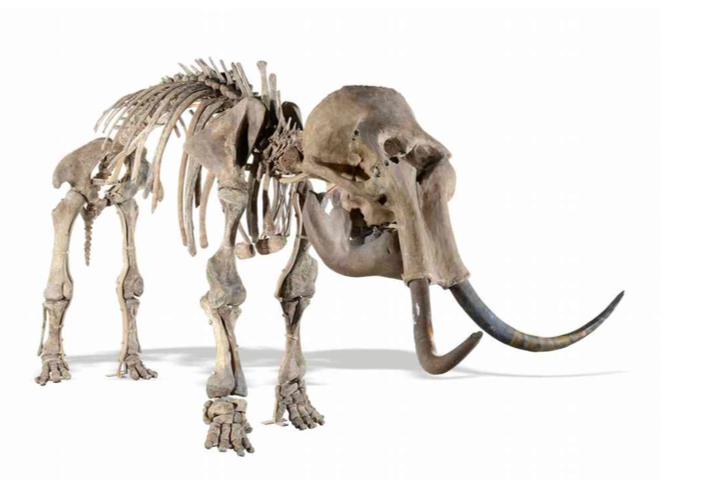 The adult female is of fairly slight built with a height of just over 2 metres, she would have only weight about 2.8 tonnes. The mother is believed to be about 45 years old, as indicated by tooth wear. The male mammoth is taller than the female although not by much. The second female mammoth is definitely younger and judging by its size, characteristics of the bones and teeth, it can be reasonably assumed that she was about 8 to 9 years old.

The highlight of the group is no doubt the well-preserved skeleton of a one-year-old mammoth as it is only the second known almost complete baby mammoth skeleton in the world. The age could be determined as it was detected that the 3rd and 4th vertebrae were fused and the long leg bones were not yet fully ossified nor completely fused.

In addition to the almost intact family group there were also many more scattered bones found at the location, which were all deposited in layers of ancient fluvial deposits, suggesting that most of the mammoths died here as a result of a natural disaster. Further research of the area where they had been found concluded that this find was one of only two known places in the world which can be classified as a natural burial place for mammoths and which makes it a palaeontogical monument – the other one is in Sevsk (Bryansk region).

The small size of the bodies and death of animals of all ages tells us that they had been living in unfavourable living conditions and that they most likely died at the end of the Pleistocene period (12,000 – 16,000 years ago). As there is no man-caused damage to the bones and as the bones were found in fluvial deposits, it can only mean that the mass mortality of a large group of mammoths in the area was due to a natural phenomenon.

Errol Fuller, Summers Place Auctions’ Natural History curator and author of several books on mammoths, explains:”The mammoth has always been a herd animal, so the discovery of this family is simply the perfect representation of this species. About 20,000 years ago the great herds that had roamed across vast areas of Europe, Asia and North America

started to dwindle to localised bands of animals, which also started to reduce in physical size. So this family seems to be a prime example of the extinction of the mammoth through climate change and human intervention.”

Summers Place Auctions’ Evolution sale, which takes place on November 21, will also include some other ice age skeletons, which will resemble the famous cave scene paintings which show mammoths next to horses, bisons and cave bears.