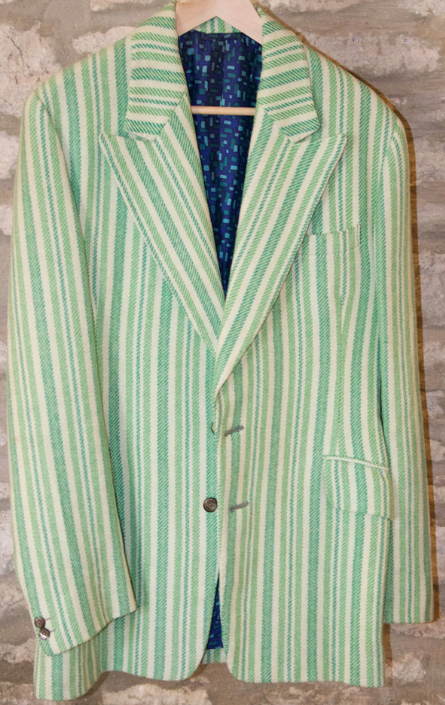 A jacket by the iconic 1960s fashion designer Michael Fish sold for £460, or nearly ten times its estimate at a recent Cotswolds’ auction of vintage clothing.

The green striped Mr Fish jacket had been expected to achieve between £50 and £80 at Moore Allen & Innocent’s fabrics and vintage clothing auction in Cirencester, but competitive bidding saw it go in fine style.

Michael Fish became famous for designing many of the notable British looks of the 1960s and 1970s, including the kipper tie.

He also designed Muhammad Ali’s 1974 Rumble in the Jungle robe, while his clothes appeared in the Peter Sellers film There’s a Girl in My Soup, and were worn by Terence Stamp in the film Modesty Blaise.

Elsewhere in the fabrics section, a collection of Hermes scarves – including a yellow silk scarf depicting horse and rider housed in a Hermes box and a scarf celebrating the Queen’s Golden Jubilee – together with assorted other Hermes scarves and pieces of jewellery achieved £440 against an estimate of £60 to £80, while two boxes of cashmere jumpers by brands including Harrods, Pure Collection, and Brora sold for £420 against an estimate of £100 to £150.

Meanwhile, a 19th-century quilt, with pink and teal floral decoration sold for £340 – more than double the £100 to £150 estimate, despite signs of fading and discolouration – and from a large selection of curtains, three pairs of long drop interlined  curtains with brocade style decoration in gold and green against a plain background sold for £340 against an estimate of £80 to £120.

An Ercol light elm studio couch/sofa with elm back and beech frame sold for £600, while an oak refectory style dining table in the 17th Century style achieved £520.

But the accolade of top price of the day was reserved for an amber bead necklace, with beads weighing a total of £49.5 grams. Despite general signs of wear and tear the hammer fell at £820 – well above the expected £50 to £80.