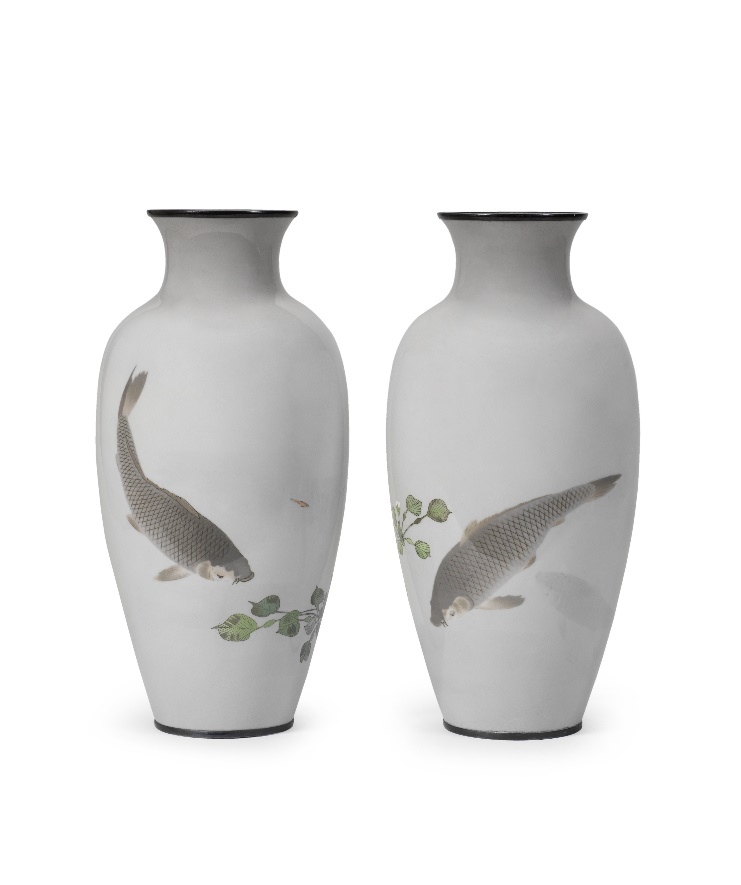 A fine pair of cloisonné-enamel baluster vases by one of the greatest and most influential artist-craftsmen of the Meiji era (1868-1912), Namikawa Sosuke, are among the highlights of Bonhams Fine Japanese Art sale in London next month. They are estimated at £20,000-30,000.

Namikawa Sosuke was born in Shimosa Province (Chiba Prefecture) in 1847 and worked most of his life in Tokyo, where he died in 1910. Dating from the last years of his very productive life, the two vases are perfect examples of the technique known as musen shippo (wireless enamelling) that he had pioneered. Thanks to his efforts to improve the chemistry of enamels—using the latest know-how introduced from Germany—so they could adhere more securely to the metal bases of his wares, Namikawa succeeded in introducing ever larger areas of colour into his designs. This and other innovations enabled him to emulate the effects of brush painting on paper or silk, as seen to great effect in the vases for sale.

Susannah Yip, Bonhams Director of Japanese Art, said, “Namikawa Sosuke is a revered name in the history of Japanese enamelling. His innovations spurred a great period of creativity, allowing artists in this field to achieve more naturalistic effects and greater nuance. His work can be found in major collections throughout the world, including the Victoria and Albert Museum in London, and these vases are superb example of his craft at its height.”

Other major pieces in the sale include:

The sale takes place on November 9.