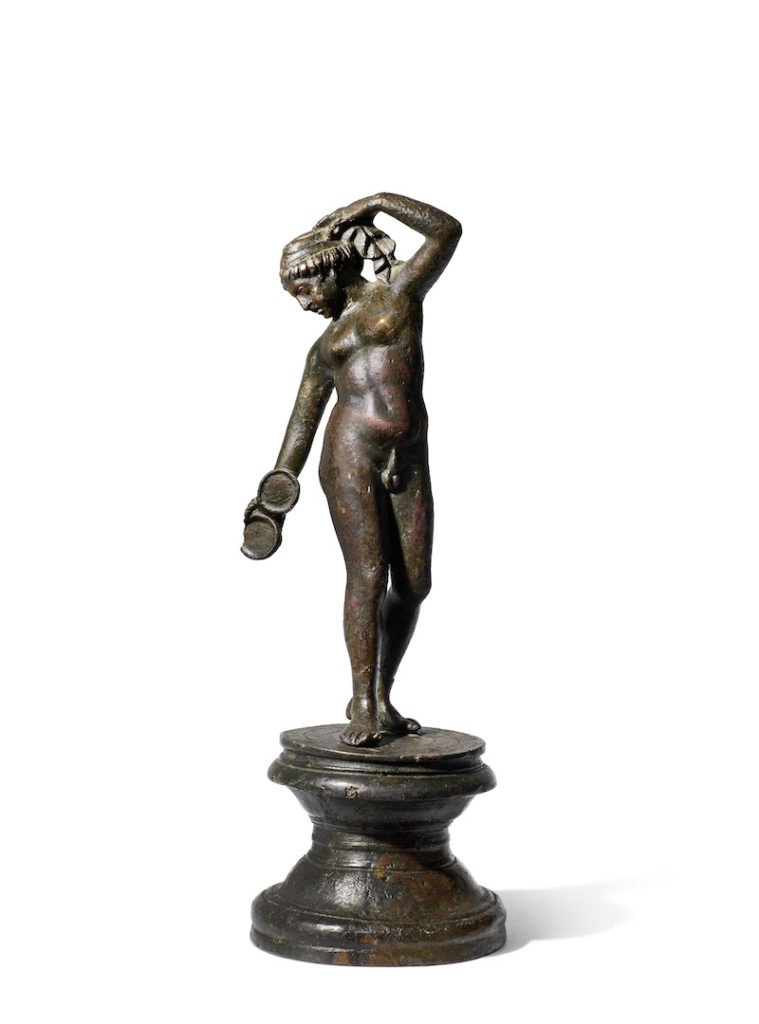 With the term ‘gender fluid’ making it onto the list to vie for the title ‘word of the year’ by Collins dictionary (only beaten to the title by the ubiquitous ‘Fake News’) a 1st-century AD Roman bronze figure to be offered in Bonhams Antiquities sale shows questions over boundaries between genders is nothing new.

The rare statue of Hermaphroditos will be offered at Bonhams next month with an estimate of £25,000 to £35,000.

In his Metamorphoses the Roman writer Ovid (43 B.C.-17 A.D.) told the tale of Hermaphroditos, the beautiful son of Aphrodite and Hermes, with whom the water nymph Salmacis fell passionately in love. Although the boy rejected her advances, Salmacis pleaded with the gods to be united with him forever. A god took pity on her and merged the two, creating an androgynous being who was worshipped as a deity during the Hellenistic period – approximately from the death of Alexander the Great in 323 BC to the emergence of the Roman Empire in the closing years of the millennium – and well into the Roman era itself.

The figure for sale is of the rare Hermaphroditos kallipygos type which shows the god standing, clearly displaying male and female characteristics and gazing at a double mirror angled on the buttocks – kallipygos means ‘beautiful buttocks’ in English. This is in contrast to the ‘Sleeping Hermaphrodite’ sculpture type, which seeks to surprise and mislead the viewer by appearing as one sex from the back, and another from the front.

Bonhams Head of Antiquities Francesca Hickin said, “This is a rare and important bronze figure of Hermaphroditos, and features in scholarly literature on the Hermaphroditos kallipygos type of which very few examples are known. It is likely that the statue was displayed in a domestic setting, either in a garden or within a home.”

The statue comes to auction from a private UK collection, and was on loan to the Museum für Kunst und Gewerbe Hamburg in 1981.

Other items in the sale include:

The sale takes place on November 28 in London.