Chinese works of art were in demand at a recent sale at The Canterbury Auction Galleries in Kent, with a Chinese imperial bronze censer, looted by a Royal Marine captain from the emperor’s Summer Palace during the fall of Peking in 1860, selling for £37,000.

The heavy cloisonné censer, used to contain burning incense, doubled its estimate on the second of the recent three-day sale of fine art and antiques. 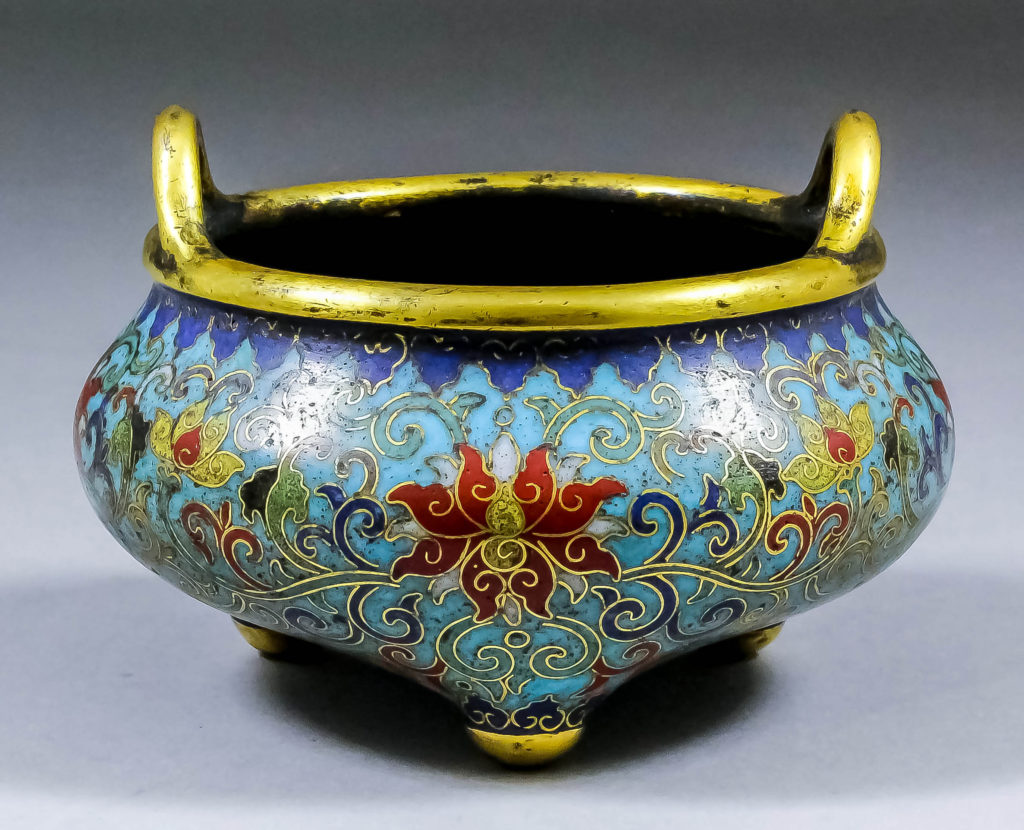 Bearing an incised four character mark for 1736-1795 during the reign of the Qianlong Emperor, the lobed body of the censer was decorated in the “Ming” style with a band of classic lotus scrolls against a turquoise ground, all resting on three gilt pad feet. It measured 3.5ins (89cm) in diameter and 3ins (76cm) in height.

Unusually, an additional fifth incised character mark appeared below the reign mark. This was either a serial number from the Chinese classic qianziwen, “The One Thousand Word Essay”, which had a strong connection to the Imperial workshops, or perhaps for differentiating its intended location in different palaces.

It had been consigned to the sale by the family of Captain Harry L. Evans, RM, (1831-1883) who was part of the Royal Marine contingent serving aboard H.M.S James Watt in 1854. He took part in the capture of Canton in 1857 and the subsequent expedition to White Cloud (Baiyun) Mountains.

Evans described the latter action in a letter to his mother, detail from which read: “Pekin is now virtually ours, one of the gates having been surrendered to us several days ago, on the day on which we were to have opened fire … The General (Sir Hope Grant) sent out for all the carts he could find, brought in as much as they could carry, and all the things were sold by auction for prize money for the force actually present on the 6th, and a considerable amount was realised as the things went at fabulous prices………I expect to get about five and forty pounds for my share.”

Other Chinese works of art in the sale, consigned by other owners, included a fine Ming dynasty, late 17th century ivory standing figure of Guanyin carrying a child, which sold for £4,900. Standing 9.5ins (24.1cm) high, on an oval hardwood stand, it was one of four pieces of early, carved ivory collected by a wealthy American banker.

All four were purchased by a Chinese bidder in the room who was in turn on the telephone to another Chinese bidder. They included a late 17th century scholar’s vase with ribbed decoration, which sold for £3,800; a group of tea bowls and saucers, selling for £1,550; and a double gourd puzzle vase with a carved chain of four monkeys, which sold for £1,250.

A Chinese rosewood sideboard with three frieze drawers and a cupboard with a pair of folding doors, the entire front carved profusely with dragons and cloud motifs, sold to a Surrey-based Chinese buyer for £2,700.