A large section of Nelson’s Union Jack that may have flown over his ship, HMS Victory during the tumult of the Battle of Trafalgar in 1805 has sold at Sotheby’s for almost £300,000. 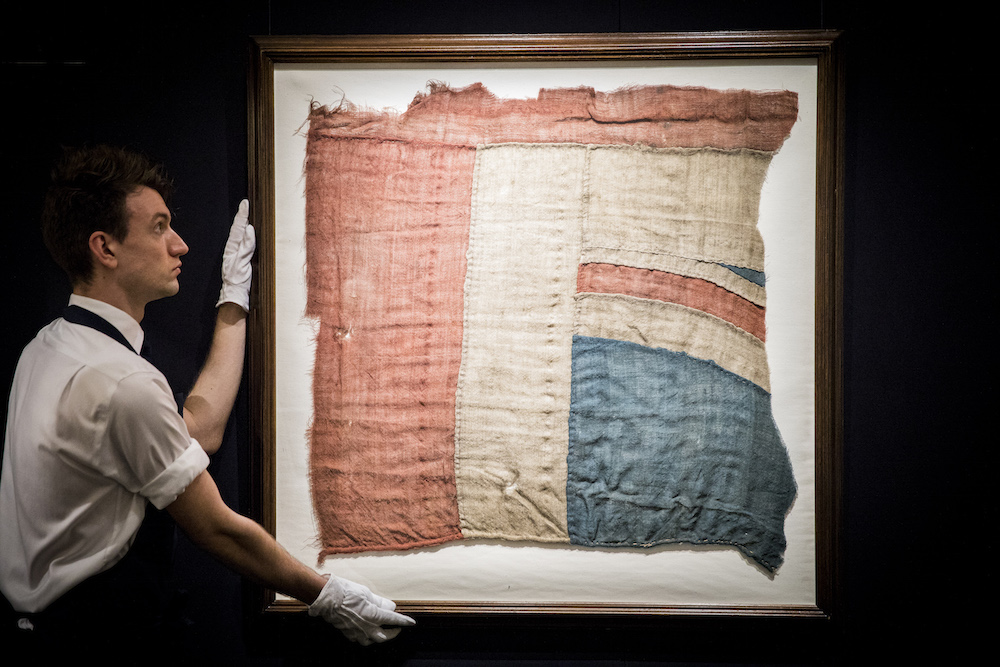 The auction house said that international collectors were out in force at their sale ‘Of Royal and Noble Descent’, which was spearheaded by a collection of 80 objects celebrated Nelson, Trafalgar and British maritime history. Four bidders battled it out for the fragment of Nelson’s Union Jack, with the bidding ending at £297,000, three times the pre-sale estimate.

Other objects that commanded interest and may have been with Nelson in his final hour were a pair of silver sauce tureens emblazoned with Nelson’s coat of arms. The tureens were presented to Nelson by Lloyds Coffee House following the Battle of Copenhagen. They achieved £106,250.

Nelson’s grog chest that he kept in his cabin while at sea also captured the attention of bidder, eventually fetching £68,750, against an estimate of £35,000.

Elsewhere in the sale, just as Nelson’s personal life and affair with Emma Hamilton fascinated his contemporaries, interest is still strong today as evidenced by a portrait of the maritime commander’s mistress by Irish neo-classicist artist Gavin Hamilton fetching £369,000. The painting once hung in Emma Hamilton’s husband’s salon in Naples.

In addition to the Nelson’s collection, the sale included an outstanding ensemble of fascinating royal and aristocratic heirlooms covering centuries of history. Together, they realised a combined total of £2.6 million.