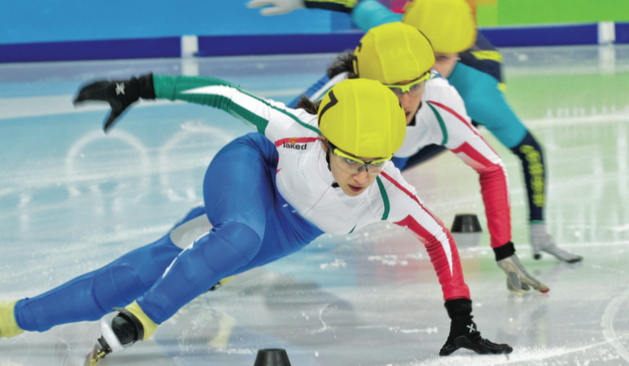 Collectors of Winter Olympics memorabilia can see items selling for vast sums says expert Paul Fraser of Paul Fraser Collectibles. And while the British media may regard the Winter Olympics as an amusing oddity (except when Torvill and Dean were skating – when it was deadly serious), in many of the world’s snowiest countries, the event far surpasses the summer games in importance. (Daily life stops in Norway when the cross-country skiing is on.)

Fancy a piste Winter Olympic memorabilia of the action? Here are your options, whether you’re on a budget or want to splurge.

Torches created for the Olympic Games relays remain one of the most iconic of Olympic memorabilia, whether you’re talking winter or summer games. Prices rise sharply for the rarest examples. Just 33 were produced for Grenoble in 1968, which is why one sold for £160,000 at Paris’ Vassy Jalenques auction house in 2012.

While the torch relay began in Berlin for the 1936 summer games, it was not until Oslo in 1952 that a winter equivalent was inaugurated. One of the torches that appeared at the first winter relay made £30,000 in 2017. 94 bearers took part in the relay – compare that with the 3,840 who carried the flame along the route from Olympia to Berlin in 1936.

Recent iterations of the torch relays have seen each runner allowed to keep their torch. This has led to a vast number hitting the market and prices are subsequently relatively low. You can pick up one of the 10,001 award-winning torches from the 2006 Torino Olympics for just £1,000.

Pin collecting is an Olympic sport in itself, such is its popularity.

It started with the first modern Olympics, the 1896 games in Athens. There, competitors, judges and officials wore cardboard badges to identify themselves.

Over the years, these badges turned to enamel. And rather than being used for official purposes, they became ornamental. Each participating country began making its own. Some countries would produce ones for each sport.

Today, it’s not just those within the inner circle of the games that make pins. Sponsors, television companies, and organisations that have nothing to do with the Olympics now create pins for each games.

The rarest ones are lapped up by the world’s pin collectors. You can pick up a participant’s pin from the 1988 Calgary or 1998 Nagano Games for around £100. Participants’ badges from the first Winter Olympics, at Chamonix in 1928, sell for around £4,000.

The British team’s pin for the 1968 Grenoble games is rare. They sell for around £75. The British team’s 2018 Winter Olympics pin is trading for around £6. There’s also a good trade in “bad city” pins – those produced for prospective host cities that lost out in the bidding. Those for Cortina (Italy) in 1988 achieve around £100.

The Miracle on Ice

In America, it’s one of the “where were you?” moments: when America’s team of college players and journeymen beat the might of their Cold War enemy USSR on the ice hockey rink in the Miracle on Ice.

Mike Eruzione is the name most associated with that 1980 Lake Placid contest. Not only was he US captain, he scored the game-winning goal. It’s why his jersey from the game sold for £425,000 at Heritage Auctions in 2013 – a record for Winter Olympic memorabilia. His stick achieved £170,000 at the same sale. Even unused tickets from the contest can sell for £750.
At the most affordable end, you can get photos signed by the whole squad for around £500.

Olympic medals are rare visitors to the auction room. For most athletes, they’re their most prized possession. And yet… most winter Olympians are far from wealthy when they retire. Which explains why some are tempted to auction off their medals.

On a personal note, I don’t feel worthy of owning a memento of somebody else’s incredible achievement. But there is a strong market for these rarities.

A gold medal from the 2002 Salt Lake Games auctioned for £70,000 with Graham Budd Auctions recently. It came from the Canadian ice hockey squad.

A gold from the 1968 Grenoble Games achieved £30,000. A member of the Soviet Union ice hockey squad (or their family) put that one up for auction.

Bronze medals are where the buyer on a budget can get involved, although these too are scarce at auction. A 1988 bronze medal awarded to a Czech cross- country skier sold for £8,000 in 2008.

Perhaps the most attractive of all pieces of Winter Olympic memorabilia.

Many of the earliest official Olympic posters were produced in small numbers, making them extremely rare today as the majority have not survived.

Just 5,000 were produced for the first Games, in Chamonix in 1924, and only 12,000 for St Moritz four years later – the first poster to bear the Olympic rings emblem. Expect to pay around £2,000 for a Chamonix original by Auguste Matisse.

Regardless of rarity, owning an original Winter Olympic poster brings excitement, wonder and beauty into your home. Originals from the 1970s onwards can usually be had for less than £100.

Alongside posters designed specifically for the Winter Olympics, ski posters for various destinations are also much in demand for their artistic merit.

What about the Brits?

Most people can only name three. Ice dancers Jayne Torvill and Christopher Dean, who won gold in 1984. And Eddie “The Eagle” Edwards. Who didn’t. A Torvill and Dean signed photo will set you back all of £10. Eddie the Eagle? £15.