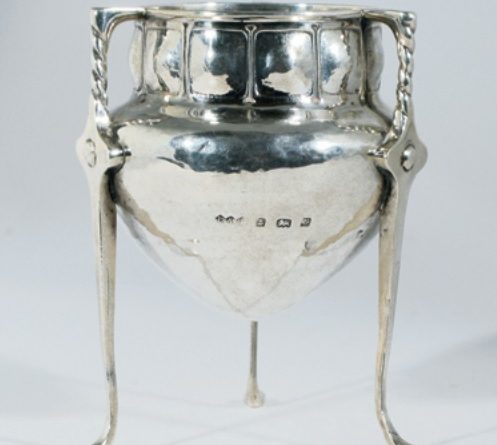 The story of Liberty’s silver began when Arthur Lasenby Liberty turned to commissioning a range of silverware around 1898. At the time, Liberty was already a highly profitable and efficient business operation with an established market for new and cutting-edge design.

Liberty had long imported decorative metalwork from the Far East, including silver spoons and teapots from Japan, which necessitated the procurement of a registered trademark in 1894 for their importation and sale.

Beaten copper dishes and plaques by John Pearson (and possibly some of his rare silver examples) and the Homes Arts and Industries Association, has also been successfully sold by Liberty throughout the 1890s, and these reflected the influence of the growing Arts and Crafts Movement on designers and artists of the period.

The concept and promotion of Liberty’s silver Cymric range appears to have come from John Llewellyn, Director and Head of the Silk Department, whose Welsh heritage provided its name.

In 1899, maker’s marks were registered in London and Birmingham. From the evidence which has survived it appears that the Silver Studio was commissioned to supply most of the initial designs for the exhibition at the Regent Street premises which launched the range in May 1899.

The Silver Studio was a well-established design agency which provided material for many leading contemporary manufacturers and it had already formed a strong business relationship with Liberty in the field of textile design.

Its leading talents Rex Silver, Harry Napper and John Illingworth Kay, were probably all involved in producing designs for this first exhibition, as well as the then unknown Archibald Knox.

Birmingham was a pre-eminent centre of jewellery production and Arts and Crafts teaching and the pieces were commissioned under the auspices of the Birmingham-based goldsmith and jewellery business of William Rabone Haseler.

Oliver Barker, who was born in Birmingham, studied under his father, a landscape painter, at the Birmingham School of Art. He also began producing commercial watercolour painting before joining with William Rabone Hasler in 1898 in a new venture designing artistic silverware. He returned to the School of Art to study design and his work produced for Hasler’s firm, William Hair Hasler, was taken to Liberty in London and shown to John Lewellyn.

These early pieces of Liberty’s silver were presented in a new catalogue with a lengthy introduction by ‘Judex’, widely supposed to be Arthur Lasenby Liberty. Cymric is presented as a collection of high quality silverware of original design, and the ancient Celtic origins of its artistic inspiration are emphasised.

However, there are several features of Arts and Crafts design to be found in these first pieces of Liberty’s silver and jewellery shown in the 1900 Cymric catalogue.

Oliver Baker’s designs often use strapwork and have a rustic, hand-hammered finish, giving the impression of a handmade piece in keeping with the Arts and Crafts style.

Such examples include a christening cups with characteristic solid and rounded form, inset with semi-precious stones with a hand-hammered finish.

For this initial range, Baker also designed bowls, powder boxes, presentation cups, boxes for cigarettes or trinkets, spoons and belt buckles which could be inset with copper or decorated with enamel.

Bernard Cuzner also supplied designs for the autumn 1899 exhibition. His work is in the hard-crafted tradition, each design carefully considered to produce a simply decorated, well-crafted piece of silverwork.

The pieces by the Birmingham designers were all handmade – Jessie Jones, Thomas Hodgetts and Charles Povey are known to have executed the designs.

The designs by the Silver Studio are also believed to have been handmade in workshops in Soho, London.

However, due to the expense, production soon moved to a model of part-machine and part hand-production. Most hollow ware pieces were spun or die-stamped flat by machine and then hand finished with the insertion of stones through pre-cut holes.

A final hand hammering was done for effect or to clean up the surface.

From 1901, all designs for the Liberty’s silver Cymric range were made solely in Birmingham by William Hair Haseler who was contracted by Liberty to lease a factory, plant and tools for this purpose. Items made after the date carry the Birmingham maker’s mark, even if the designs originated elsewhere.

Another designer who has been positively identified as producing work for Liberty is Jessie Marion King (1875-1949). Her work reflects her training at the Glasgow School of Art and her belt and coat clasps, toilet sets, pendants and brooches

are often delicately decorated with tiny roses and other floral designs.

For many pieces attribution to an individual designer is hugely problematic due to the company’s policy of marking all goods as ‘Designed by Liberty & Co’. Arthur Lasenby Liberty’s entirely understandable choice to promote his brand rather than individual designs has proved deeply frustrating to later collectors of Liberty’s silver.

Designers were only credited when it was a requirement of exhibitions and publications which displayed their work.

This is complicated further both by the operations of the Liberty Design Studio which would alter and amalgamate purchased designs as they saw fit, and by the practice of the Silver Studio, which credited the head of the Studio as the designer even when the work was produced by another employee.

Liberty’s designers produced a substantial body of good quality and interesting design, often in the Arts and Crafts style, which bears comparison with the work of many of their gifted contemporaries.

However, the work of one designer of this range was so superlatively original and distinctive that it can sometimes be attributed at a glance.

Archibald Knox’s work took Cymric silver to a different level and the Celtic Revival designs he produced for the range came to be identified as its, and Liberty’s, signature style.

Celtic ornamentation had been growing in popularity since the discovery of the Tara brooch in 1850.

Yet for Knox, it was not merely a fashion but part of his Manx heritage and his work displays an unprecedented understanding and mastery of this form of decoration.

His pieces are often cast with entrelacs and interlacing lines typical of Celtic ornamentation, which seem to float loosely around the boxes and vases.

Foliate patterning is also often found in his work with stems and plants depicted in stylised form, such as on the central roundel on silver and enamel menu holders, produced in 1904.

Other recurring motifs are spade and heart shapes that can also be found in other Arts and Crafts designs but which in Knox’s work are more refined. For example, his belt buckles and jewellery are sinuously curved, emphasising the beauty of the silver or gold and his work is typically decorated with blue and green enamels, turquoise, blister pearls or other semi-precious stones.

This use of semi-precious rather than precious stones links Knox with the Arts and Crafts Movement whose designers also chose to embellish their jewellery and metalware. Knox produced a wide range of designs for Liberty – from cups, chalices and candlesticks, to boxes, jugs and jewellery.

Knox’s spare and elegant curvilinear style also directs the form of the pieces which are streamlined and sometimes elongated. Vases and boxes are often supported by a tripod of narrow legs which widen for the foot, both for decorative purposes as practical support

The shape of Knox’s pieces are as distinctive as the Celtic decoration. It is thought that Knox worked briefly at the studio of Dr Christopher Dresser, a designer who embraced the use of machinery in his work. The Dresser link is often noted due to the qualities of functionality found in some of Knox’s designs.

A typical feature is an extended thumb-piece on tankards and jugs which forms the dual role of decoration and facilitating the lifting of the lid.

Knox incorporated the requirements of machine production into his designs, placing seams of pots, jugs and boxes unobtrusively at an angle of underneath a handle. This form of manufacture allowed for smaller items of the Cymric range to be produced in sizeable volumes, but the larger more elaborate designs for cups, chalices, vases and mirrors were only ever produced in small numbers.

Liberty entered Knox’s jewellery into the 1903 Arts and Crafts Exhibition and it influenced many European designers as well as inspiring a large volume of copies from the Pforzheim jewellery-making centre in Germany.

Charles Robert Ashbee held Liberty responsible for the financial collapse of the Guild of Handicrafts as the part machine-made Cymric range undercut the handmade silver goods of the Guild.

It is true that many of the first designs derived inspiration from the work of the Arts and Crafts Movement, but Liberty’s Cymric silver evolved from these beginnings to possess a distinct style which incorporated the use of machines to produce original pieces of high quality. 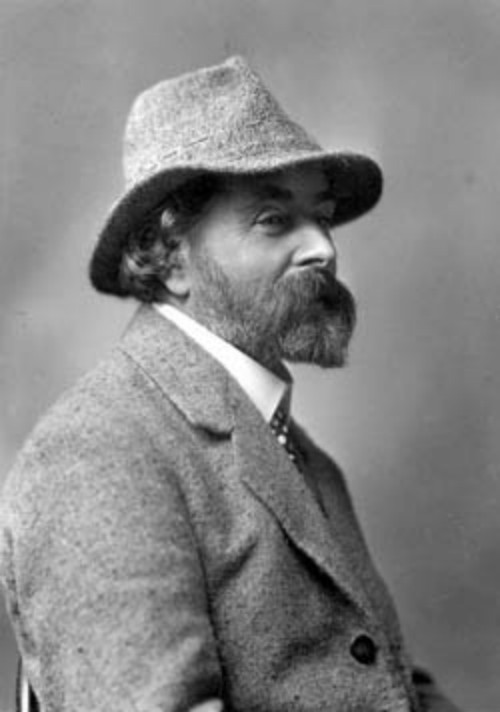 Knox was born on the Isle of Man and studied at the Douglas School of Art. He moved to a teaching job in Surrey in 1897 and then came to work for Liberty via the Silver Studio in 1898.

He returned to the Isle of Man in the summer of 1900 and began to supply Liberty directly with designs from this time.

On his return to London to teach in 1904, Knox continued to produce new designs for Liberty for silver, jewellery and the Tudric pewter range, as well as carpets and garden ornaments which were characteristically Celtic in style.

His final designs for Liberty were in 1912 before he left England after resigning due to objections about his advanced teaching methods. However, Liberty continued production of some of his silverwork well into the 1920s.

Knox worked briefly in the USA before returning to the Isle of Man where he taught and painted until his death in 1933.

The fashion for Celtic and rectilinear ornamentation inevitably waned and Harry Craythorn, who worked for William Hair Haseler, became Liberty’s principal designer for Cymric from 1911.

Harry Silver of the Silver Studio also began to produce designs which showed elements of Knox’s style and also that of Charles Rennie Mackintosh and the Weiner Werkstatte.

Liberty silver is highly collectable today. It is often seen as the commercially successful legacy of the Arts and Crafts Movement and, in the designs of Archibold Knox, the highpoint of British Art Nouveau.

Prices start in the low hundreds for simpler, smaller pieces, but rapidly rise, such as the silver dressing table mirror which fetched just over £99,000 at Sotheby’s Paris in 2011. The mirror, made in Birmingham in 1901, was known from its original drawing but had never been seen before. The piece epitomised Knox’s brilliant design with panels of enamel, set with lapis lazuli and chalcedony.

This guide is adapted from an article by Michael Jeffrey of Woolley & Wallis Auctioneers in Salisbury originally appeared in Antique Collecting magazine.