The winning bidder who secures the skeleton of a new species of dinosaur in a French sale in June will also get the honour of naming it after themselves.

The sale of the newly discovered species of carnivorous dinosaur will take place at Auguttes auction house in Paris this June. Eric Genest of Auguttes said, “My estimate for this dinosaur is €1.2m to €1.8m. But this is only an estimate. The price for such a rare item can climb very fast because this is a still unknown dinosaur to which the buyer can give his name.” 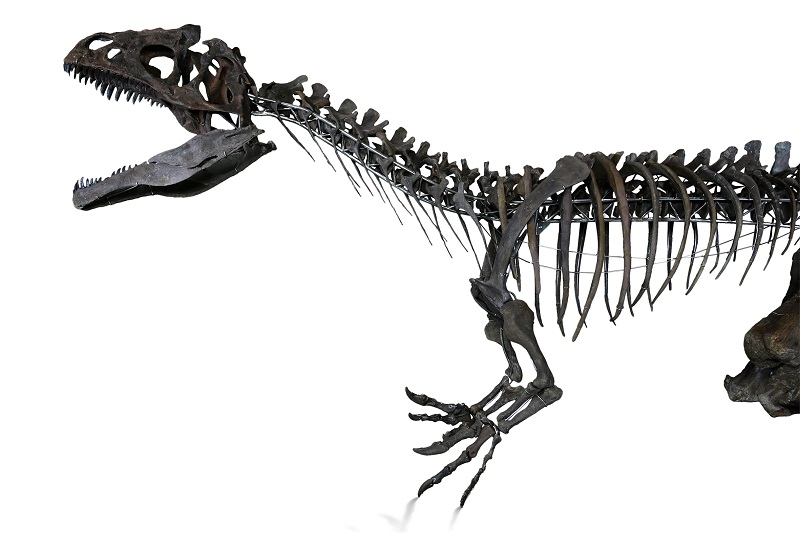 The skeleton, with a length of nine metres and a height of 2.6m, still has 70% of its original bone conserved.

It is mounted on a stainless steel structure that is designed to support the weight of the skull, rather than having it replaced with a lighter, resin replica, as is usually exhibited in museums. The lattice steelwork also allows for individual bones to be removed from the skeleton to undertake scientific study.

The late Jurassic skeleton was discovered in the course of excavations carried out in 2013 at a site on the Morrison Formation in Wyoming, an Upper Jurassic geological sequence laid down 155–148 million years ago that covers much of the western United States, one of the world’s richest sources of dinosaur fossils.

It was only in 2016, when the skeleton was being prepared by European specialists, that scientists noticed that it presented major anatomical differences from other known allosaurs.

The scientists reported the skeleton has a greater number of teeth and a more substantial pelvis with a broad suture between the pubic bones, while the scapulae (shoulder blades) are more elongated and there are also differences in the bones of the skull. The various scientific reports are included in the sale catalogue.

Dinosaur expert Eric Mickeler, a consultant to auction houses for the valuation of fossils, believes the skeleton is significant. “The discover of this specimen probably represents the high point of my career, so significance are its scientific implications. Mickeler was responsible for driving the market for natural history, bringing major fossils to auction at Christie’s and Sotheby’s.