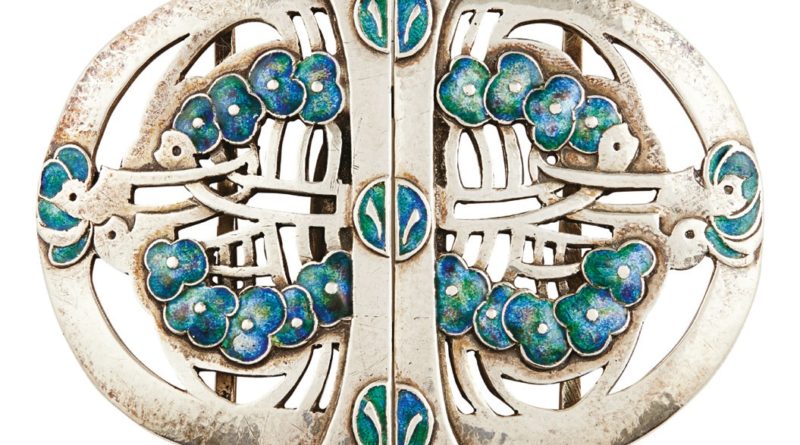 If you thought the highly distinctive and world-recognised style of The Glasgow School began and ended with Charles Rennie Mackintosh, think again! To mark Mackintosh’s 150th anniversary, we asked Colette Keaveny of www.theglasgowstyle.co.uk, to showcase some of the unsung designers to look out for.

Although today Charles Rennie Mackintosh is the most widely recognised Glasgow Style designer, there were more than 70 designers operating at around the same time who are associated with the style.

The majority of these were female. Almost all of the designers had connections to the Glasgow School of Art and, as such, objects by them are sometimes referred to as Glasgow School.

While largely local to the city of Glasgow, in its day the Glasgow Style had an extensive and far-reaching impact. Designers were recognised at the time for their ground-breaking work through national and international art publications, awards and exhibitions. However, now for whatever reason, they
have largely been forgotten, overshadowed by the success of Mackintosh. This article touches on some of those designers.

Margaret Gilmour (1863-1942) Margaret Gilmour and her sister Mary studied at the Glasgow School of Art until the late 1870s. Together with a third sister, they went on to establish the Gilmour Studio which operated in the city for
about 50 years. Winning local commissions and producing items for sale, they also taught a range of crafts  including metalwork and enamelling.

Margaret’s output appears to have been prolific, working predominantly in metalware of a high quality, in brass, white metal and sometimes copper. The studio produced a wide range of decorative metalware for the home, including wall plaques, jardinières, clock faces, candle sconces, trays, mirrors, lamps, desk and dressing table sets.
Glasgow Style motifs were generally used in their designs as were Celtic entrelacs, sometimes with enamel roundels.

Little information on Margaret exists. But examples of her work appear regularly at auction. Often it is unsigned, although when signed the signature is “MG” (which in theory could equally refer to her sister Mary). The high volume of output from the studio is cited as a reason for a lack of signature on her work, with pattern books and quality as a means of determining provenance. Further research on her work would be useful.

In the past year, items by or attributed to her or indeed to her patterns have been sold at auction all over the country, with Edinburgh and Glasgow featuring most often. Objects include white metal and brass mirrors, clocks, sconces, trays and planters, with prices ranging from £60 to £200, £500, £700 and the highest at £2,500 – reflecting quality and/ or scale.

Jessie Marion King (1875–1949) began attending the Glasgow School of Art as a full-time student in 1893. From the beginning, her distinctive style and talent for drawing were apparent. Her early illustrative work adopted a fairytale look and use of dotted lines, often in black and white. She taught  design for bookbinding and for ceramic decoration.

A versatile artist, she designed costumes, gesso panels, wallpaper, fabrics, as well as enamel jewellery for Liberty & Co. She had a long career in book illustration,  associated with more than 80 titles. In 1908, she moved to Paris with her husband, the designer, E.A. Taylor, opening an art school.

On the outbreak of the war they returned, settling in Kirkudbright where she dedicated her time to decorating pottery blanks. King enjoyed a long and successful career, due to her talent and her ability to adjust to the mood of the times. Her work appears at auction fairly regularly all over the UK and also sometimes on the Continent. In the past year over 40 pieces have turned up, mostly ceramics, paintings or illustrative works. Jewellery appears less often. Generally, prices remain strong, an indication of her popularity and quality.

Talwin Morris (1865-1911) moved from Winchester to Glasgow in 1893 to join publisher Blackie & Sons as art director, befriending many of the Glasgow designers and, in particular, The Four (Charles Rennie Mackintosh, James Herbert MacNair and the sisters, Margaret and Frances Macdonald). He designed furniture, metalwork and jewellery but is probably best known for his designs for book bindings, which were produced in the thousands.

The peacock motif, highly formalised plant forms including roses, hearts, squares and strong vertical lines feature regularly and his metalwork is often set with semi-precious stones. Morris died at the age of 45 and is buried under a headstone designed by Mackintosh.

Books designed by him tend to come up at auction and online sites fairly regularly, due to the volume produced. Prices can vary considerably, with some from as little as £5, right up into the hundreds for rare editions or sets. Recent metalwork pieces at auction, which tend to appear less often, have been attributed to him and are popular.

A year-long programme of events includes:

Colette Keaveny recently completed an extensive study on the subject of the Glasgow Style and continues to promote learning on the subject through @TheGlasgowStyle and www.theglasgowstyle.co.uk