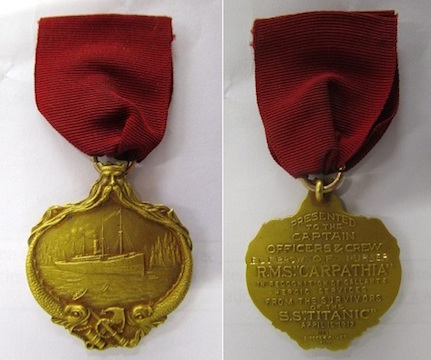 A Titanic-Carpathia gold medal that was awarded to a purser onboard the ship that went to the rescue of survivors of the Titanic disaster is set to be sold with an estimate of £18,000 to £25,000 in Buckinghamshire.

The Titanic gold medal was awarded to Ernest G. F. Brown, Purser on board the RMS Carpathia by the Titanic Survivors Committee on May 29, 1912, just over a month after the passenger ship’s devastating collision with an iceberg. 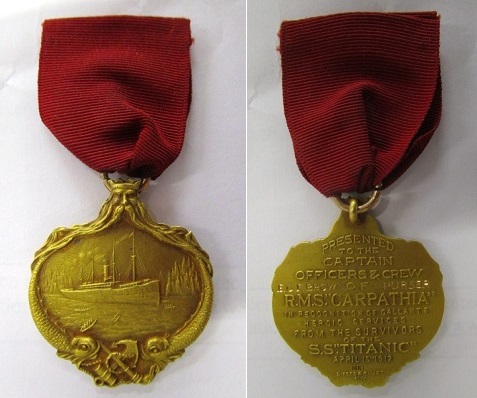 The Titanic had set sail from Southampton on April 10, 1912, via Cherbourg in France and Queenstown, Ireland, and was due to arrive at its destination in New York a week later.

However, 400 miles off the Newfoundland coast, at 11.40pm (ship’s time), the Titanic hit an iceberg, four days into her journey. Two hours and forty minutes later the ship had sunk with over half of her passengers and crew still aboard.

Soon after the tragedy, a group of survivors formed the Titanic Survivors Committee to offer assistance to those who had lost everything on the fateful voyage, alongside thanking the captain and crew of the Carpathia who had worked so hard to reach survivors and the outstanding care they provided to those they found at the scene.

An example of the survivors’ gratitude was the presentation of medals and a silver cup to the captain and crew, undertaken at a ceremony in Naples in May.

One recipient of a medal was Ernest G. F. Brown, Purser on board the RMS Carpathia. Born in 1885 in Liverpool, Brown was 27 years-old when the Carpathia went to the aid of the Titanic on that April night.

Presented by Mrs J J Brown, (Margaret Brown, who later became known by the Hollywood nom de plume of ‘The Unsinkable Molly Brown’ (although known as Maggie to her friends, nobody had ever called her Molly)), 14 gold medals were awarded to Captain Rostron and the senior officers of the Carpathia, 110 silver medals to the junior officers, with the rest of the crew receiving a medal in bronze. The remaining absent crew members who in the intervening days had been assigned to other ships in the line, received their medals by post. All the medals were issued unnamed, leaving it up to the recipient to have it engraved as they wished.

Prior to service on the Carpathia, Ernest Brown had served on the Cunnard Line steamships for many years, such as the S S Saxonia from at least 1906 as assistant Purser and later S S Ivernia. They were known as the Boston Steamers, passenger ships that crossed the Atlantic between Liverpool, Halifax and Boston. S S Ivernia was the last ship he served on before signing on to the RMS Carpathia on the 7 February 1912.

The medal will be sold in Bourne End Auction Rooms’ Antique & Collectors sale on August 1.