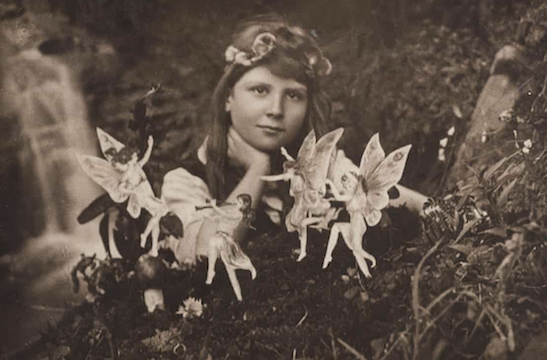 Photographs from one of the greatest hoaxes of the early 20th century, known as the Cottingley Fairies photographs featuring a pair of young cousins apparently proving the existence of fairies, are to go under the hammer at Gloucestershire auction house Dominic Winter Auctioneers next month.

The photographs were taken by cousins 16-year-old Elsie Wright and nine-year-old Frances Griffiths between July and September 1917. The pair ingeniously created the playful fairies using coloured paper and hat pins. They then staged scenes by the stream at the end of Elsie’s garden in the village of Cottingley in Yorkshire and took photographs using Elsie’s father’s camera.

When her mother took prints of the two photographs along to a meeting in Bradford of the Theosophical Society where a lecture on fairies was taking place, the images created an instant stir. However, it was when they came to the attention of the creator of Sherlock Holmes and committed spiritualist, Sir Arthur Conan Doyle, that the furore around the photographs gathered momentum to gain national and international attention.

Doyle was convinced that the photographs were genuine, using them in an article for The Strand magazine about the subject. The girls were then instructed to provide further photographic evidence of the fairy folk, which they duly did by creating three more images during the summer of 1920.

At a time when the national mood was somber following the Great War, the delightful images gave succour to the belief in a better, mystical world. While most saw the photographs as a hoax, the fact that some well-known names believed that they were genuine served to divide opinion.

It was only in the 1980s that the two women behind the Cottingley Fairies photographs confessed to the hoax and explained how it had been perpetrated.

Two of the images are now set to sell in the auction house’s Vintage and Modern Photography sale with an estimate of £2,000.