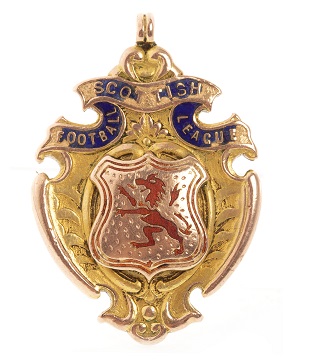 A nine carat gold Scottish League Championship medal that was awarded to Celtic Football Club defender, William Cringan, in 1919 has been given an estimate by the auction house of £1,000 to £2,000, while the car number plate J777 NKY, which was once owned by legendary Celtic player Jimmy ‘Jinky’ Johnstone, could fetch up to £2,000.

Willie Cringan (1890–1958) was a Scottish international footballer who played for Sunderland, Ayr United, Celtic, Third Lanark and Motherwell. The player’s senior debut for Celtic came in a 2-0 victory over Rangers on the 12th of May 1917. He would later go on to captain the team until his departure in 1923.

Commenting on the auction, James Bruce from McTear’s said, “Early Celtic Football Club memorabilia, alongside that from Rangers, very rarely comes to auction so it is quite a coincidence that the auction of the Celtic medal comes hard on the heels of a 1914 League Championship medal won by Rangers player George Ormond. That particular medal made a very good price and we expect Willie Cringan’s medal to do the same.”

The shield shaped medal has a centre inlaid with a red lion rampant.  The rose gold reverse has the inscription ‘Championship 1918-19 Won by Celtic F.C. William Cringan’.

James Bruce added, “Private number plates are big business in the UK but it is not often that one comes to auction with such a fascinating history. This is a very unusual piece of Celtic Football Club memorabilia and I am sure there are plenty of Celtic fans out there who would love to own in.”

The Celtic medal and number plate, which are being sold by anonymous vendors, will feature in McTear’s Works of Art Sale on October 12.