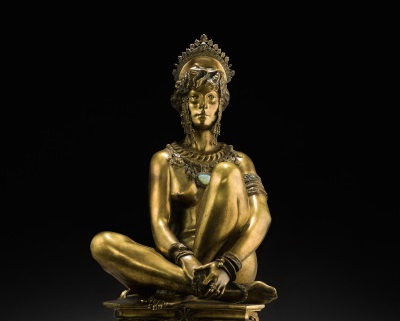 Sotheby’s is to stage an inaugural auction dedicated to gold – the singular metal that has seduced, obsessed and intoxicated mankind for millennia.

The sale, entitled The Midas Touch will encompass works from the great civilisations of the world, sacred objects, contemporary art and centuries-old text.

Constantine Frangos, Head of The Midas Touch sale said: “In this first ever sale dedicated entirely to gold, we show the true splendour and versatility of this precious metal, as well as man’s obsession with it over the centuries. Eclectic, yet all connected by their creators’ fascination with the metal, the lots in the sale, which span all the major collecting categories, from decorative arts and paintings to cars, jewellery and photography, show how the appeal of gold has endured.”

Highlights from the sale will include: 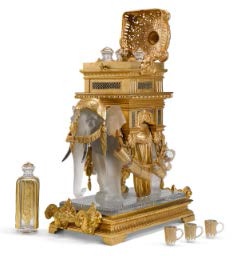 The Baccarat Elephant Cave À Liqueur
Estimate: £250,000 – 400,000
This French gilt-bronze mounted frosted cut-crystal Elephant liqueur set is one of the rare examples identified by French manufacturer Baccarat as having been created by them for, or just after, the 1878 Exposition Universelle de Paris. The model enjoyed great success with other examples launched some years later, including a special commission for the Maharaja of Baroda to celebrate the Elephant Festival in India. 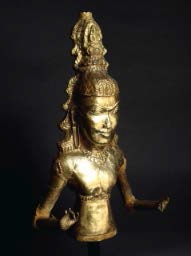 Late 7th / Early 8th Century Gold Figure of the Bodhisattva Avalokiteshvara
Estimate: £80,000 – 100,000
Portrayed with the beauty of youth, a gentle smile contrasting with curved eyebrows and intense spiritual gazing eyes, this very powerful figure likely represents the Bodhisattva Avalokiteshvara in his aspect of Jatamakuta-Lokesvara – the ‘Lord of the World’. The antecedents of this exceptional sculpture can be traced to Andhra Pradesh and Tamil Nadu in southern India and comparable designs of the towering headdress can be found in contemporaneous images from Thailand although no similar gold figure appears to have been recovered. 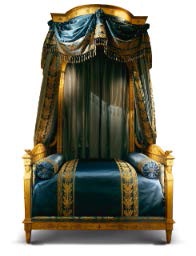 The Talleyrand Bed – A French Empire giltwood lit à baldaquin, circa 1805
Estimate: £100,000 – 150,000
This masterpiece of French Empire menuiserie is comparable to the great beds supplied to the Imperial palaces of the Tuileries, Fontainebleau, Trianon, Compiègne and Malmaison. Elegantly designed, this bed once belonged to the notorious French minister, diplomat and socialite, Charles-Maurice Talleyrand-Périgold, Prince de Bénévent, at his country seat in the Loire. 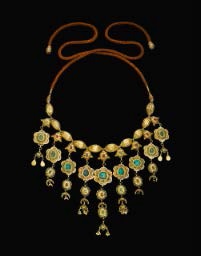 A gem-set gold necklace (lebba), Morocco, probably Fez or Meknes, circa 18th century
Estimate: £25,000 – 35,000
This opulent gem-set gold necklace is symbolic of the important role played by jewellery in Moroccan marriage ritual. Produced in the 18th century and worn by both Muslim and Jewish brides, these lebbas were designed to cover the entire chest area, and would have been complimented with additional large earrings, bracelets and in some instances, a crown. Most probbaly produced in Fez, influences in the shape and design of this necklace can be traced to medieval forms imported into Morocco from Spain. 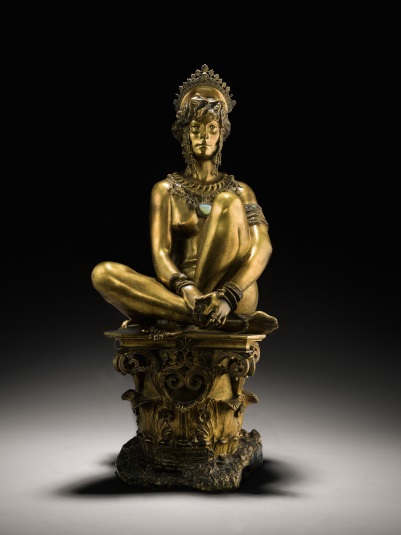 Jean-Léon Gérôme, Corinth
Estimate: £250,000 – 350,000
Gérôme’s final and crowning sculptural masterpiece, Corinth represents the spirit of the evocative ancient city which straddled the stretch of land joining the Peloponnese to mainland Greece. The Greek city, celebrated in antiquity as the birthplace of painting, sculptural portraiture and the Corinthian column capital was also famous for her hierodules, or sacred prostitutes who resided in the temple of Aphrodite. In this work, Gérôme deliberately evokes this sexual practice, which would have been scandalous to his contemporary 19th-century Parisian Salon audience.