A single-owner collection of wristwatches has sold for over £20,000 at a Shropshire auction house, with heritage names such as Rolex and Longines particularly fought over.

The South Shropshire vendor had decided the time was right to part with his exclusive collection, with national and international bidders vying for ownership.

Auctioneer Christina Trevanion of Trevanion and Dean, said, “Big name wristwatches are proving to be a very timely investment with our buyers at the moment, watches as a commodity have grown 5% in the last twelve months, 35% in the last five years and 67% in the last ten years, so it’s no surprise that they are being snapped up in the saleroom by our bidders keen to make a savvy investment.”

Elsewhere in the sale, a rare post-war football programme, which had generated plenty of pre-sale interest, eventually sold to a local private collector for £650.

The item was the official programme for the FA Cup fourth round tie in January 1957, where Wrexham FC played international superstars Manchester United at the Racecourse Ground.

However, what made this particular example important is the fact that it was signed not only by Manchester United manager Matt Busby but also seven of his players, known famously as the ‘Busby Babes’, including Duncan Edwards, Mark Jones, Bill Foulkes, Dennis Violet, Billy Whelan and Jim Murphy. 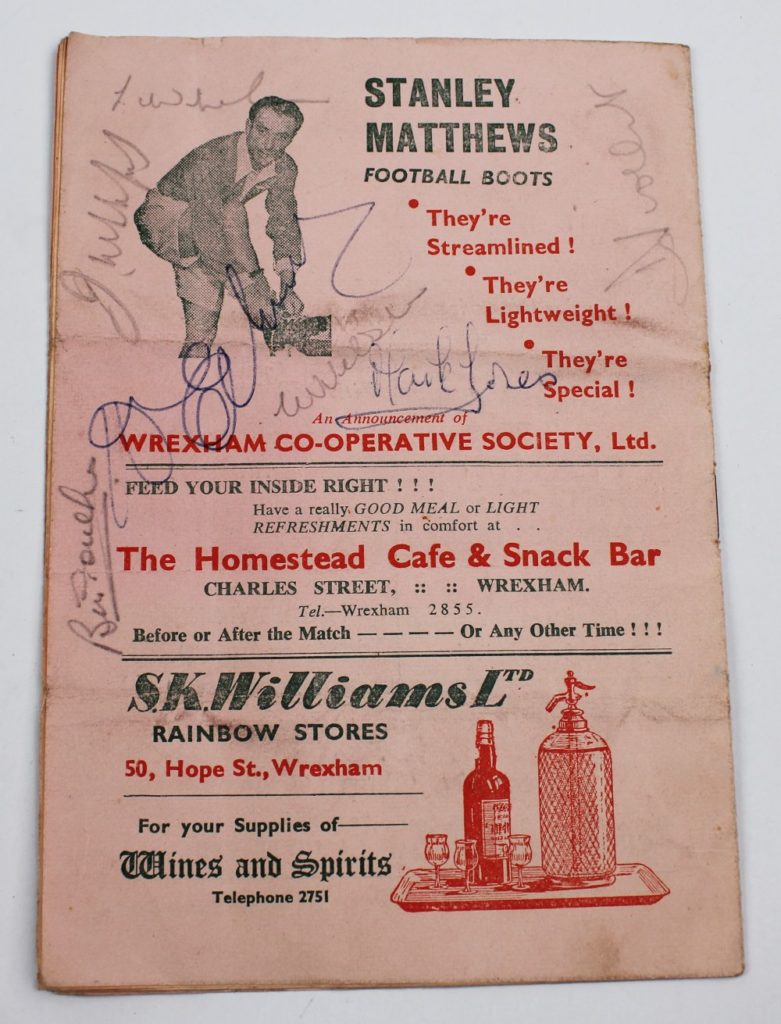 The seller explained, “As a fourteen year old lad, I was very excited about seeing Manchester United play, at that time we used to get the bus to the games, we would never have been allowed to go up to Manchester to see United play, so seeing them on our own ‘home turf’ was quite an event. We used to regularly travel the eight miles from Overton to Wrexham to watch home matches.

Having got the bus to the game on January 26, 1957, he managed to get some signatures of players as they were coming off the pitch, and then waited patiently at the exit of the away team changing room to collect the remaining autographs. “As a WAFC fan, it was disappointing that Wrexham didn’t win the game, they were always the underdogs so we knew it was unlikely, but I was definitely cheered up by getting the autographs of players that, at that time, were the best in the country, it was quite something.”

Auctioneer Aaron Dean explained the added poignancy about programme. “A little over a year later some of players who had signed it died as a result of the Munich Air Disaster on February 6, 1958. Sadly, this includes Duncan Edwards, regarded by many as one of the greatest players of his generation; perhaps of all time.”

The auctioneers also reported strong results in the traditional furniture market where a hunt table from a country house near Shrewsbury sold for £1,200 and a collection of Tunbridge Ware boxes and objects of virtue from an Oswestry based collector sold for £6,000.