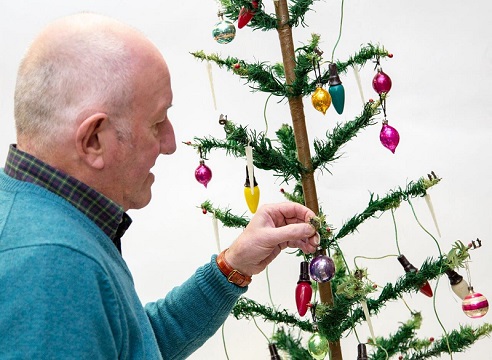 An 80-year-old treasured vintage Christmas tree, that has been part of a Leicestershire man’s festive celebrations for the last 74 years since his birth, is to sell in a Derbyshire auction house with a sparkling estimate of £200 to £300.

The tree was originally bought at Woolworths in the 1930s for sixpence by Steve Rose’s parents and he has fond childhood memories of his mother decorating it and, while his parents passed away many years ago, he has maintained the tradition until now.

He said, “It was our main family tree for years and I remember my mum putting it up every Christmas,” said Steve. “I’ve had it all my life.

“Christmas was not an extravagant affair when I was a child growing up in South Wales. In the late 1940s you’d get a Christmas sock and inside it was a tangerine, nuts, some loose change and small presents. It was very simple but enjoyable.”

Although a little sparse compared to modern-day artificial trees, it is rare as one of the first mass-produced trees ever made for the famous department store. It will be sold at Hansons Auctioneers on December 18 along with more of Steve’s festive collectables: 1950s Woolworths Christmas tree lights, still in their original box; baubles and glow-in-the-dark icicles.

Steve confesses it did cross his mind to throw the tree in the skip once – but he’s glad he didn’t.

Charles Hanson, owner of Hansons Auctioneers, said: “This is a chance to buy your very own vintage Christmas and own a tree of historical importance. Nearly a century after it was made, this tree deserves to be an evergreen star in our saleroom.”