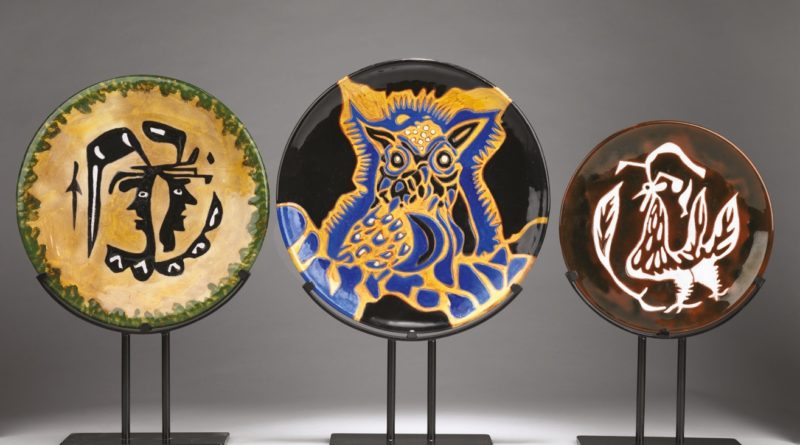 With Picasso ceramics soaring out of the price range of most collectors, work by his contemporary Jean Lurçat is eminently affordable as a new exhibition demonstrates.

There was a time, in the fifties, when all a ceramics collector had to do to pick up a work by Picasso was swing by his pottery studio in Madoura in the south of France and buy one. But now these pieces, purchased for a few hundred francs 50 years ago, are reaching stratospheric prices (with an earthenware owl making $2.4m in 2016).

With ceramics undergoing a renaissance in collecting terms across the board, now is a good time to consider the work of one of Picasso’s contemporaries Jean Lurçat – one of France’s most groundbreaking 20th-century artists, even though he is far lesser known.

One of the reasons for his lack of recognition might be Lurçat’s chosen medium – tapestry. Like Picasso, Lurçat’s career took off with abstract and cubist painting, before branching out into other fields including ceramics, mosaic and jewellery.

Tapestry was the medium in which he truly made his name. In fact, following his career as a successful painter of the School of Paris, Lurçat is said to have single-handedly revived tapestry-making as an art form during the 1930s.

But it is his ceramics which are celebrated at a new selling exhibition in London this month. Exhibition organiser Garbriel Toso from Whitford Fine Art, said: “Our clients are often in search of something new, something different than painting and sculpture.

In addition to being highly collectable, Lurçat’s ceramic works are also very decorative and allow a
much cherished freedom of display.”

Born in 1892 in Bruyères in northeastern France, close to the German border, Lurçat studied medicine before enrolling under Victor Prouvé, the head of the École de Nancy.

In 1912, he moved to Paris to take up digs with his brother André, an aspiring architect.

Immediately he began to move in artistic salons of the day, meeting Matisse, Cézanne and Renoir and counting Rainer Maria Rilke, Antoine Bourdelle and Elie Faure among his friends. He also frequented the circles of Picasso, Louis Marcoussis and Max Jacob.

It was here he opened up to the influence of Cubism and, as a founder of the art review Les Feuilles de Mai (The leaves of May), championed the causes of Fauvism and the avant-garde movement.

A trip to Berlin and Munich in 1920 turned Lurçat’s eye to Expressionism. His extensive travels, to Spain in 1923 and to the Middle East, North Africa and the Sahara from 1924 to 1929, left a lasting influence on his painted work.

During this period he created his first significant tapestries: Filles Vertes (Green Girls) and Soirée dans Grenade (Evening in Grenada). He also met Marthe Hennebert who wove two tapestries Pêcheur (Fisherman) and Piscine (Swimming pool) and became his wife in 1923.

Lurçat began exhibiting regularly at the important gallery of Jeanne Bucher in Paris in 1925, alongside artists such as Hans Arp, Braque, Max Ernst, Jacques Lipchitz, and Picasso, and enjoyed three solo exhibitions between 1930 and 1936.

In 1932, Lurçat travelled to the United States, where, in Philadelphia, he met Albert Barnes (who bought two of his paintings) and participated in an exhibition at the Valentine Gallery in New York titled Selection, alongside Braque, André Derain, Matisse, and Picasso.

After many years abroad in Africa, the Middle East and the Soviet Union, he returned to France in 1944 and fought in the French Resistance. After the war, Lurçat’s reputation was secure as one of the great modernist artists and tapestry designers of the 20th century.

As well as painting and tapestry, Lurçat’s artistic eye simultaneously wandered towards a multitude of other media, including engraving, book illustrations and – most notably – ceramics.

Gabriel continued: “Lurçat’s ceramics stand out for their vibrant colours highlighted by the superb glazing, while the themes are often connected with the natural world and ancient mythology creating a direct link with the Classical and Renaissance traditions. Style elements are often borrowed from Mediterranean and North African cultures, thanks to the artist’s travels in these regions.”

During the 1950s, while Picasso set up shop in Madoura, Lurçat grafted at the ceramic workshops of Firmin Bauby in Sant-Vicens, in the southern French city of Perpignan, travelling once or twice a year from his home in Saint- Céré in the Lot region.

During this time Lurçat made master copies of his ceramics, which were kept as models to make numbered editions.

Gabriel continued: “The subjects favoured by both Lurçat and Picasso are very creative and playful, and include Greek mythological figures, animal shapes and the cosmos, among others.

“While Picasso tended to prefer the earthy tones, Lurçat was not afraid to explore the full colour potentials. The final result is none the less as exciting.”

Lurçat’s association with the Sant-Vicens workshop gave his work an international dimension and he was joined by other artists, including the painter and tapestry maker Jean Picart le Doux, and the French printmaker Marc Saint-Saëns.

Lurçat’s ceramics proved popular and were shown across Europe. In 1952 his work went on display at the Maison de la Pensée Française in Paris and, in 1963, at the Hannover Museum in Germany. A year later, he celebrated an exhibition at the Musée des Arts Décoratifs in Paris and, in 1965, staged the landmark exhibition Ceramiche Lurçat-Picasso at La Bussola Gallery in Turin.

Gabriel said: “For many years Lurçat’s ceramic designs have been eclipsed by his tapestries and other works of art. It is high time their vibrant colours and striking designs were honoured in their own right.”