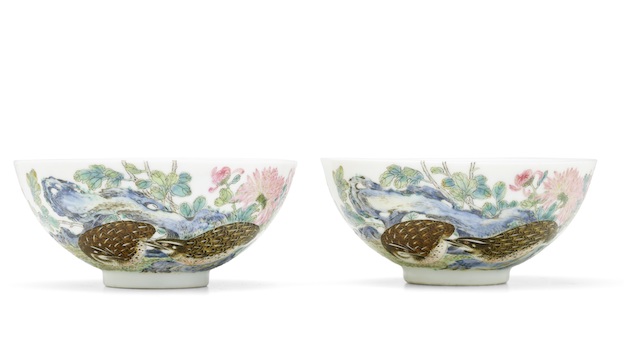 One of the highlights of Bonhams’ forthcoming Chinese Works of Art Sale in New York is a pair of rare and important Imperial bowls from the Yongzheng period 1723 to 1735.

Exquisitely enamelled with the rare design of quails and chrysanthemum blossoms, the bowls bear the Yongzheng six-character underglaze-blue marks, and have an estimate of $300,000 to £500,000 in the sale on March 18. 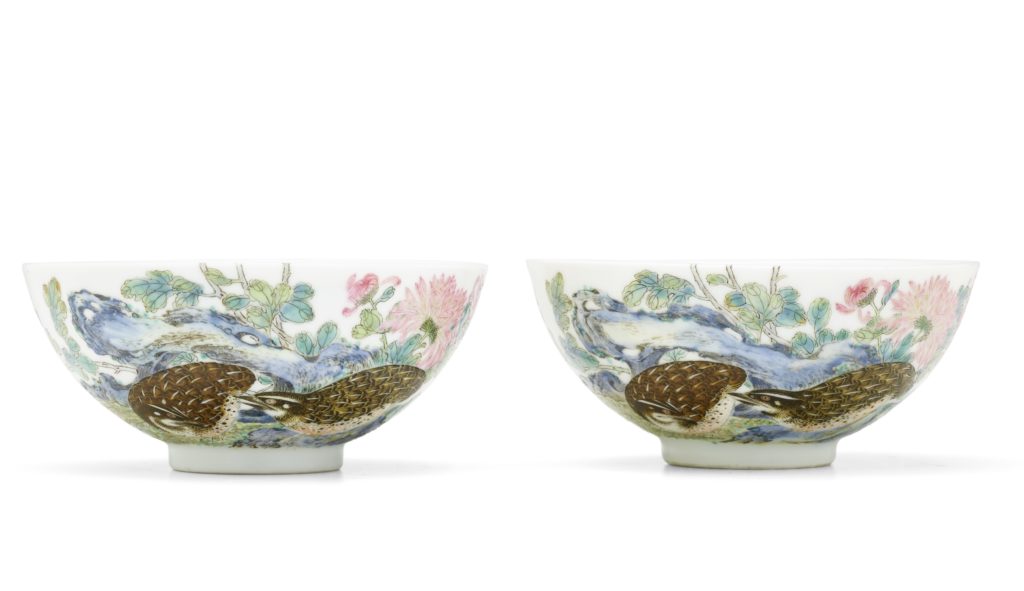 The ‘quail’ bowls are from the collection of Virginia “Ella” Hobart (1876-1958), and thence by descent, was acquired by Ella Hobart in the early 20th-century, possibly from Yamanaka & Co.

Virginia Hobart became an heiress in 1892 when, with her two siblings, she inherited her father’s fortune from timber, gold and silver mining. In 1913-1914, Ella and her husband Charles Baldwin travelled to China and Japan, returning in time to attend the Pan-Pacific exhibition in San Francisco in 1915. In her letter to her son, dated January 29, 1913, she writes with great enthusiasm of meeting the famed dealer Sadajiro Yamanaka in Kyoto the day before. Following Charles’s death in 1936, Ella sold Claremont Mansion in Colorado Springs, Colorado, which was built after the style of Versailles, and relocated to San Francisco.

The exceptionally rare pair of bowls epitomise the very finest Imperial porcelain of the Yongzheng reign renowned for its innovative design, unsurpassed elegance and exquisite artistry.

They are particularly rare in two aspects: firstly, in the design incorporating chrysanthemums rather than prunus and nandina, therefore symbolizing autumn rather than spring; and in the continuous decoration over the rim and onto the interior, in a technique known as guoqiangzhi rather than retaining a plain undecorated interior. 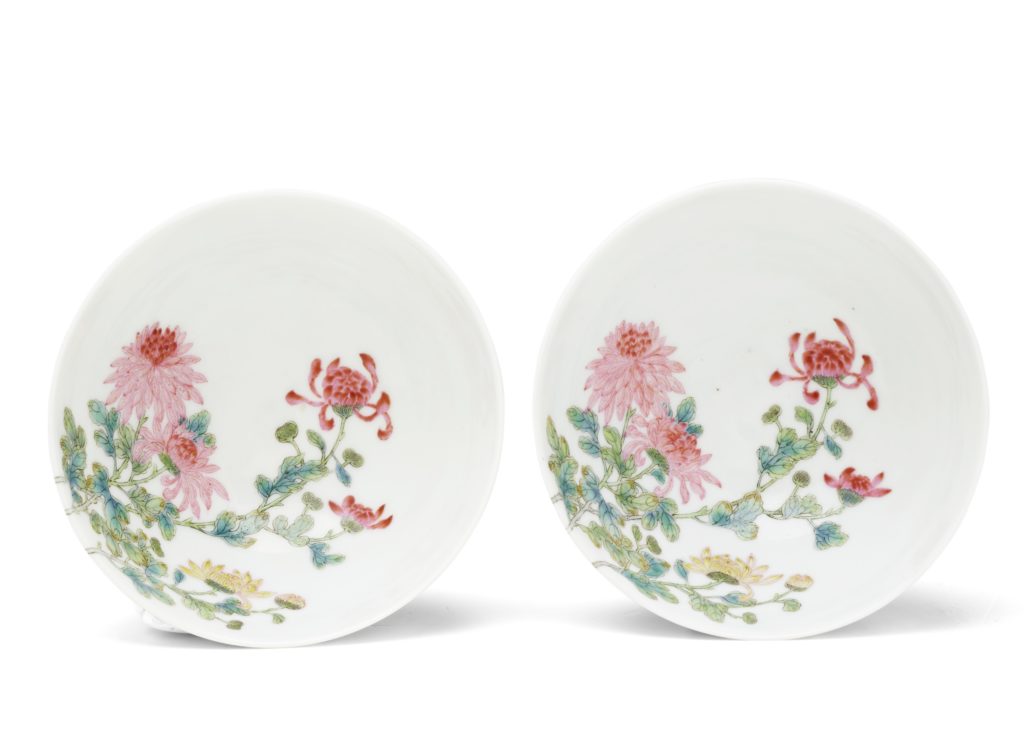 The palette of the superbly painted and enamelled bowls can be described as a combination of falangcai and fencai; the former, translating as ‘foreign colours’, and the latter corresponding to the ‘famille rose’ palette.

The flanagcai enamels are apparent on the present lot in the brown and ochre enamelling of the quails. Related flanagcai ‘quail’ decorated bowl and a teapot and cover, Yongzheng four-character blue-enamelled marks and period, are in the National Palace Museum, Taipei.

The falangcai palette and manner of painting was influenced by the Jesuit painters in the Court, such as Giuseppe Castiglione (1688-1766), known as Lang Shining. One such example is the treatment and colouring of the feathers of a sparrow in the painting titled ‘Chrysanthemums’ in the album Immortal Blossoms in an Everlasting Spring, which is considered to be a masterpiece dating to the Yongzheng reign, in the National Palace Museum, Taipei.

Several closely related quail enamelled bowls of the Yongzheng period can be found in important museum and private collections including Foundation Baur, Geneva and formerly in the Meiyintang Collection. However, these are decorated with prunus and nandina, representing the season of winter, whereas the Hobart bowls represent autumn.

Furthermore, while the related examples are undecorated to the interior, the Hobart bowls are superbly decorated in the guoqiangzhi manner, with the chrysanthemum design continuing over the rim and onto the interior.

Much admired in China for their courage and fighting spirit, pairs of quail, shuang an, are a homophone for ‘peace and prosperity’. Chrysanthemums ju, are among the earliest cultivated flowers in China. Blooming in the colder months, they symbolise fortitude as well as longevity and are also associated with the Autumn season.

Combined with pairs of quails, chrysanthemums convey the doubly-propitious wish of ‘May you live in peace’. Furthermore, drawing its inspiration from earlier periods, quail and chrysanthemums were a popular theme within the much celebrated ‘bird-and-flower’ painting genre of the Song dynasty. This genre was revived by the Yongzheng Emperor and represented on Imperial porcelain under the direction of Tang Ying (1682-1756), the celebrated superintendent of the Imperial kilns at Jingdezhen.

The elegant rendering of blossoming chrysanthemums, depicted in various stages of bloom on the present bowls, were very likely inspired by the celebrated paintings of Yun Shouping (1633-1690) and his unique manner of combining bold colors and washes to emphasize the distinct beauty of flowers.

These remarkable bowls can be numbered amongst the finest Imperial porcelain produced at the zenith of porcelain production during the reign of the Yongzheng Emperor, known for his personal involvement in arts for the Imperial Court, his refined aesthetic taste and high standards.