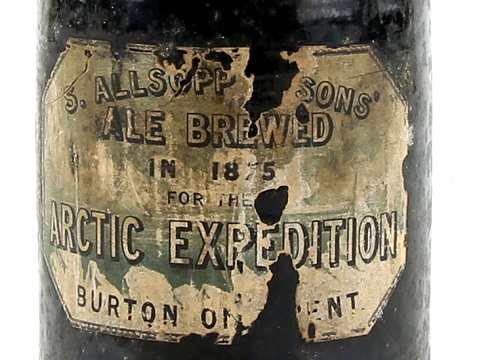 A rare bottle of ale especially brewed for the British Arctic Expedition of 1875-76 will be offered in a Surrey saleroom next month, with an estimate of £400 to £600.

The bottle commemorates the expedition led by Clements Markham, Secretary of the Royal Geographical Society, who was also the mentor of Captain Robert Falcon Scott, leader of the later ill-fated voyage to Antarctica in 1910-1912.

Markham revived British Polar exploration after the earlier disaster of the Franklin expedition in 1847 saw it mothballed for decades when 129 officers and men, along with their two ships, vanished while searching for the north-west passage.

The bottle of ale, with a lead seal embossed, will be offered at auction at Ewbank’s on May 9. Consigned by the descendants of a brewery employee, the bottle of Allsopp & Sons Burton Ale, embossed BREWED FOR THE ARCTIC EXPEDITION, recalls the moment that pride and confidence surfaced once more for a new generation of pioneers.

By 1874, two of those who had been involved in searching for Franklin, Markham and Rear Admiral Sherard Osborn, decided that the time was right to head north once more, and they put together the finances for a new voyage of exploration and scientific discovery to be capped by conquering the North Pole.

Equipped with dogs, sledges, clothes, shelter and food, 120 men set sail from Portsmouth in two ships, the Alert and the Discovery, under the command of Captain Georges Nares on May 29, 1875 to the cheers of a crowd of 200,000.

The expedition was to be a success from the point of view of exploration and mapping uncharted territory further north than anyone had previously ventured, but it was to prove a disaster in the planning and resulting loss of life.

Nares set sail for the West coast of Greenland, where Discovery, captained by Henry Stephenson, wintered in the far north west, while Nares himself, in the Alert, pushed on, finding winter shelter in a bay that was the farthest north reached by any ship at that time.

As the expedition set about planning the journey to the pole, it became apparent that they were ill equipped for the task; the sledges were too heavy for the men to pull, the clothing and tents unsuitable and the food did not include enough of the right vitamins to fend off scurvy.

Attempts to establish contact between the two ships ended in disaster, with an initial party setting out from the Alert abandoning its efforts after the death of a crew member. A second attempt was successful but revealed that the dogs were not suitable for pulling the sledges.

Heading for the Pole

At the beginning of April 1876, the sledging expeditions finally set off for the Pole in three separate parties that went on to encounter treacherous conditions that impeded their progress severely. When scurvy started to take hold the mission was effectively doomed, but by the time one party decided to turn back on May 12, just 400 miles short of the Pole, several members of the expedition were already out of action. Almost a month later, on June 7, they still had 40 miles to go to reach the Alert with barely any of them still able to work.

Lieutenant Parr volunteered to set off for help alone, covering the 40 miles to the ship in just 20 hours. The party were rescued but in a bad way, with another death in the interim.

Both of the other parties also had to be rescued, with additional deaths incurred, and by the time everyone had returned, scurvy had also gripped the ships’ crews. They escaped just in time and headed for home, reaching Portsmouth in November 1876 to a heroes’ welcome.

It was not long, though, before the newspapers started to ask questions about the competence of the expedition and its leaders, as well as the heavy cost in lives that had been incurred.

Nares shouldered the blame of the official inquiry for not preventing the outbreak of scurvy and had to wait for his subsequent promotion until well after the controversy had died down. Public opinion went against the perceived risk of further expeditions and the Admiralty curtailed its involvement in this field of endeavour.

It was to be another 22 years before the British returned to Polar exploration, funding an expedition to Antarctica in 1898.

“The privations and bravery of the men in the British Arctic Expedition have rather faded from public view over the intervening decades, which is a shame because we owe much to these pioneers and their spirit,” said auctioneer Chris Ewbank.

“It is amazing how a simple bottle of ale can act as such a powerful reminder of what they went through and bring those intrepid and challenging ventures back to life in an instant.”