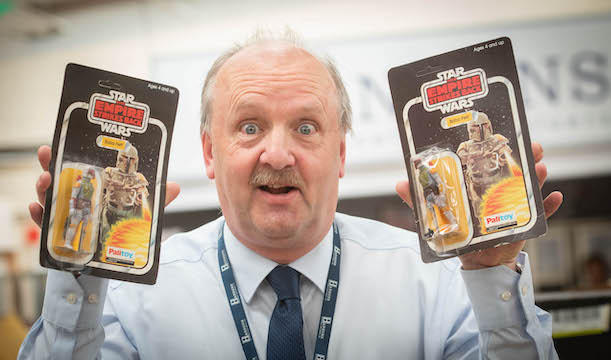 A Derbyshire auction of 90 vintage Star Wars toys made £24,000 at Hansons Auctioneers recently, including two small plastic toys selling for more than £2,000 each and another lot reaching £1,000 from a low estimate of £80.

A rare Tie Bomber Authentic Imperial Spacecraft toy from film The Empire Strikes Back, owned by a man who worked at a Palitoy factory where the toys were made in the 1980s, was among star lots in the toy auction.

Its estimate of £200-£300 was smashed before the auction even started with advance bids catapulting the price into orbit. Overall, Star Wars bidders paid hammer prices totalling £24,000 for 90 Star Wars lots.

Steve Fulford, toy valuer at Hansons, said: “It was unbelievable. We had high hopes for the auction because the popularity of Star Wars is huge worldwide, but these results have taken us into another galaxy.

Mr Fulford said: “The appeal of Star Wars just keeps getting bigger. Plus, toy nostalgia moves with the times as people grow older and new collectors come along who want to invest in childhood nostalgia from the 1970s and 80s.”

Hansons, in Etwall, near Derby, succeeding in sourcing several Star Wars toys thanks to its close proximity to Coalville, a Leicestershire town once home to a Palitoy factory where the toys were made.

For example, the Tie Bomber spaceship which made £2,100 thanks to its rarity was found at a free valuation event at Marlborough Square Methodist Church in Coalville.

The 77-year-old owner of the Tie Bomber, from Coalville, who didn’t wish to be named, said: “I was a clerical worker at Palitoy for 12 years from 1983 to 1995 and, from time to time, surplus stock was sold to staff.

“My son used to like Star Wars and I often bought toys home for him. For some reason, this one was never opened and I found it in the loft. If I bought it in 1983 it’s been there for 36 years.”

David Wilson Turner, head of Hansons’ toy department, said: “We’re over the moon with this result. Vintage Star Wars toys, particularly if they’re untouched and in original packaging, are unmissable for collectors. We initially hoped to make around £10,000 from our Star Wars Lots but they more than doubled that figure to reach £24,000.”