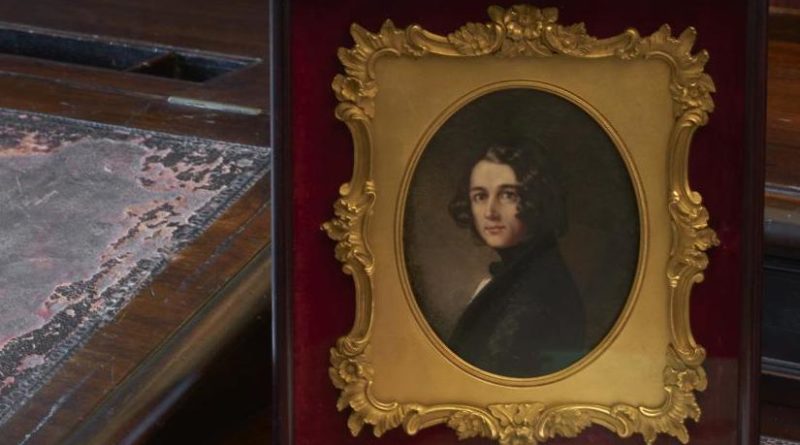 A miniature watercolour ‘lost portrait’ of Victorian author Charles Dickens has been saved for the nation after it was acquired by the Charles Dickens Museum in London for £180,000.

Painted in 1843 by Margaret Gillies, a London-born Scottish painter renowned for her miniatures and landscape watercolours, the portrait was rediscovered by art expert and dealer Philip Mould of the BBC’s Fake or Fortune hidden beneath a layer of mould within a box of trinkets in a South African auction sale in Pietermaritzburg.

It was found alongside a brass dish, an old recorder and a metal toy lobster. Following its rediscovery, the painting was brought back to the Philip Mould & Co Gallery in London where it underwent conservation and provenance research. It was then confirmed as the portrait of Charles Dickens (1812-1870) painted by Margaret Gillies (1803-1887) over six sittings in 1843.

The painting has been given its new home thanks to a successful fundraising campaign undertaken by the museum. The Lost Portrait Appeal was launched in November 2018 and gained worldwide support and donations from admirers of the author, alongside substantial grants from Art Fund and the Arts Council England/V&A Purchase Grant Fund.

The Gillies portrait of Dickens is set to go on display from October 24 at the museum at 48 Doughty Street as part of its festive season programme.

Dr Cindy Sughrue, Director of the Charles Dickens Museum, said, “We are so excited to be bringing the ‘lost’ portrait home. It is a magnificent affirmation of the enduring appeal of Dickens’s writing and the worldwide fascination that he continues to inspire.”

Dr Sughrue highlighted the role played by Philip and his team in recovering the work. “My thoughts go back to last year, when Philip first contacted us and showed us an image of the painting. It was a memorable, heart-in-mouth moment, to say the least. This is a vibrant portrayal of Dickens, at 31 years of age, already known the world over but with so much still ahead of him and in the midst of writing arguably his best-loved work, A Christmas Carol.”

The portrait was exhibited at the 1844 Royal Academy Summer Exhibition where it became the defining image of Dickens. On seeing the portrait, the poet Elizabeth Barrett Browning said it “has the dust and mud of humanity about him, notwithstanding those eagle eyes”. However, in 1886, Gillies noted that she had ‘lost sight of the portrait itself’. It remained lost until the South African auction in 2017.

Philip Mould commented, “Dickens’s astonishing re-emergence, not least from beneath an obscuring wall of fungus, could never have been predicted. We are thrilled he is finally checking into his London home after such a global adventure – it is an epic tale with a supremely happy ending.”