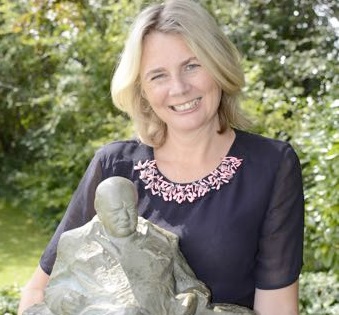 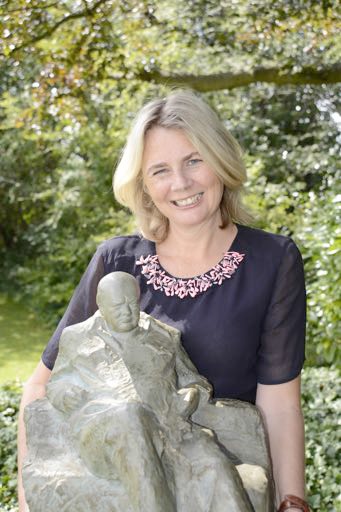 The maquette of an iconic sculpture of Sir Winston Churchill will be included in a Surrey sale in October, with an estimate of £6,000 to £10,000.

The large, table-top bronze resin sculpture is of Oscar Nemon’s bronze statue of Sir Winston Churchill, which is located on the Green at Westerham, just 10 miles from Catherine Southon Auctioneers and Valuers‘ sale at Farleigh Golf Club. 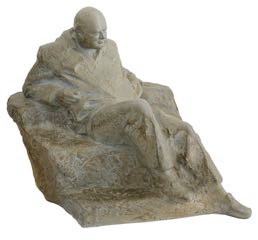 The current owners’ late husband Bob Webster was presented with the maquette as Chairman of the fundraising committee for the Churchill memorial statue on Westerham Green.

On the death of Churchill the people of Westerham wanted a lasting memorial and it was decided that a statue on the Green would be a fitting sign of their respect as he was held in much affection, and that Oscar Nemon should be the sculptor. A committee was formed and Bob was elected Chairman.

All sorts of events were organised to raise funds with the maddest but most successful of these being the ‘Great Churchill Cigar Race’. Two teams,  Westerham Football Club and Westcombe Park Rugby Club of which Bob was 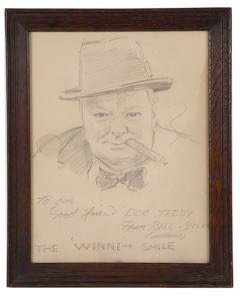 a member ran from Dover to Westerham over three days pulling giant cigars on wheels. The unveiling of the bronze at Westerham was attended by Lady Churchill and Bob Webster made a speech. After the ceremony, Bob Webster was invited to St James’s Palace where Oscar Nemon had a Grace and Favour Studio and was presented with the cast.

The statue is sold together with black and white photographic prints of the unveiling of the statue.

Another Churchill-related item in the auction is a cartoon in pencil by Herbert Henry Harris (British, 1894-1953) titled ‘The WINNI’ ng Smile‘. Depicting Winston Churchill smoking a cigar, it is dedicated ‘to our friend ‘Doc’ Teddy From Bill & Sylvia, signed H. H. Harris’ and carries an estimate of £60 – £80.

Auctioneer Catherine Southon said, “I am delighted to be offering two items relating to Sir Winston Churchill, whose home Chartwell wasn’t far from our office in Bromley. However this isn’t the first we have sold items linked to him. In December 2017, we sold a pair of his tortoiseshell spectacles made by his opticians C. W. Dixey & Sons for £6,000 plus premium, so we are hoping the items in the October sale attract a lot of interest.”

The sale takes place on October 2.