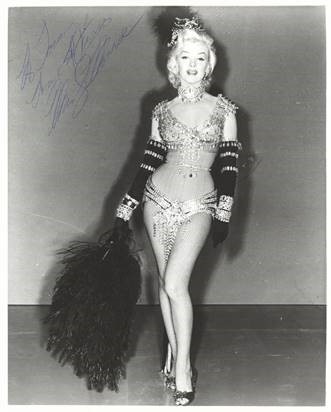 A rare Marilyn Monroe photograph of the actress wearing what was supposed to be her costume in the film Gentlemen Prefer Blondes is to be sold in a London sale next month.

The rare black and white photograph of the celebrated actress shows her wearing the original costume designed by William Travilla in 1953 for the film in which she starred alongside Jane Russell. However, the £4000 showgirl outfit was rejected when it came out that Marilyn had posed nude for a calendar back in 1949.

The photograph of Marilyn Monroe shows the film star wearing the black fish-net body stocking in nude farbic, with jewels sewn on and embellishments in diamond.

Travilla was given strict instructions to cover Marilyn up and, therefore, designed the iconic pink dress worn in the sequence in which the actress sings the song “Diamonds Are a Girl’s Best Friend”.

The photograph is estimated to fetch £5,000-7,000 in a sale of Autographs at Chiswick Auctions on October 16.