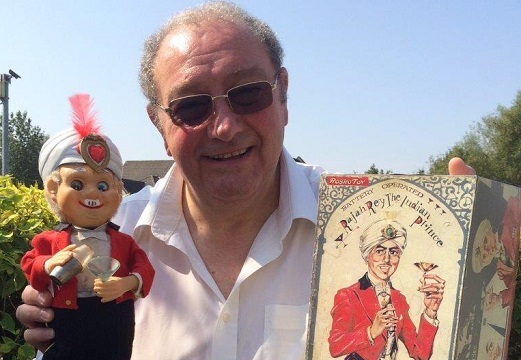 One of the world’s largest collections of around 1,000 mechanical vintage tin toys could sell for £100,000 when it goes under the hammer in Derbyshire later this month.

Over the course of 40 years, mechanical tin toy collector Mike Stockwell, 69, amassed thousands of the vintage tin toys, which he carefully stored in display cabinets at his home near Chesterfield in Derbyshire. Now he has decided to sell the collection in a dedicated auction at Hansons entitled, The Mike Stockwell Tinplate Toy Collection.

The auction will comprise 277 lots, with examples of vintage tin toys from the 1950s-70s, and interest is growing among collectors around the world, particularly in America, Japan and China.

Steve Fulford, toy valuer at Hansons, said, “It’s the most staggering array of toys I have ever seen – and I used to run a toy museum. It has to be one of the best collections of its type in the world.

“When we walked into Mike’s house to value the items, it was amazing to see room after room filled with boxed toys in display cabinets and on shelves. Some of the objects, now safely locked away in our safe, are incredibly valuable. For example, Snappy The Happy Bubble Blowing Dragon has a guide price of £20,000 to £30,000.”

Mike, a retired toy shop owner, ecologist and Space Programme volunteer, said: “A robot recently sold in America for $86,000. Brand new in the UK in the 1950s it cost 49 shillings and 11 pence – that’s the equivalent of £2.50 today. I don’t think there’s a bank in the world that could give you that kind of return.

“Tinplate toys are a tremendous investment now. Many were made in Germany and Japan after the Second World War. There was a need to get their economies back on track and they were allowed to make toys.

“During and just after the war it seemed as if everything was sepia, brown or green. In the 1950s these new toys emerged in bold and beautiful colours and they captured the new sense of optimism. They symbolised a bright and colourful future.

“I’m fascinated by the engineering excellence these automatons demonstrate. I loved to work out how each one worked.

“For example, there’s a battery-operated Japanese automaton, hand-made in 1964, called McGregor. He’s a Scotsman with a walking stick who sits in a chair. Switch him on and he gradually rises out of his chair, stands up and smokes his cigar.

“His movement is ingenious and seemingly impossible.  It’s on a par with the ability of a honeybee to fly horizontally from one flower to another. Bees shouldn’t be able to do that. McGregor works thanks to a series of levers and counter levers, a motor, wires and batteries. There are no silicon chips.

“This wasn’t a toy for children, it was a talking point to put on your home bar and impress your visitors. You can imagine Del Boy having one in TV’s Only Fools and Horses.

“Japan had a love of western culture and there was often a connection to a movie or TV programme, from Charlie Weaver to Robby the Robot, Howdy Doody to Star Wars. One automaton in the sale, Rajah Rey The Indian Prince, is based on Richard Burton in 1955 film The Rains of Ranchipur.”

Mike, who was born in Birmingham in 1950, thinks his fascination with vintage tin toys was sparked by that fact that he didn’t have many playthings as a child due to the expense.

“These Japanese and German toys were a dad’s wages for the week. Ordinary families like mine couldn’t afford them. I bought them at toy fairs and flea markets over many years, sometimes for pennies and now they’re worth thousands.

“The time has come for me to sell my collection because I’m very concerned about climate change.  Money raised from the auction will be used to fund eco-conservation projects. I have three grandchildren and I want them to a have a future.”

The Mike Stockwell Tinplate Toy Collection will be sold on October 24.