There’s nothing quite like antique glass decanters. It combines craftsmanship, elegance and warmth. There is pleasure in decanting a bottle of wine into a decanter, which could be over two hundred years old and wondering who may have used it in the past.

Not only do decanters have sculptural appeal they are also eminently useful. Add to this their sustainability and it’s easy to see why antique decanters are back in fashion.

The history of decanters goes back to the late 17th century when their purpose was to serve wine at the table having decanted it from the bottle or barrel. Decanting wine made it both easier to serve and separated the wine from the dregs. 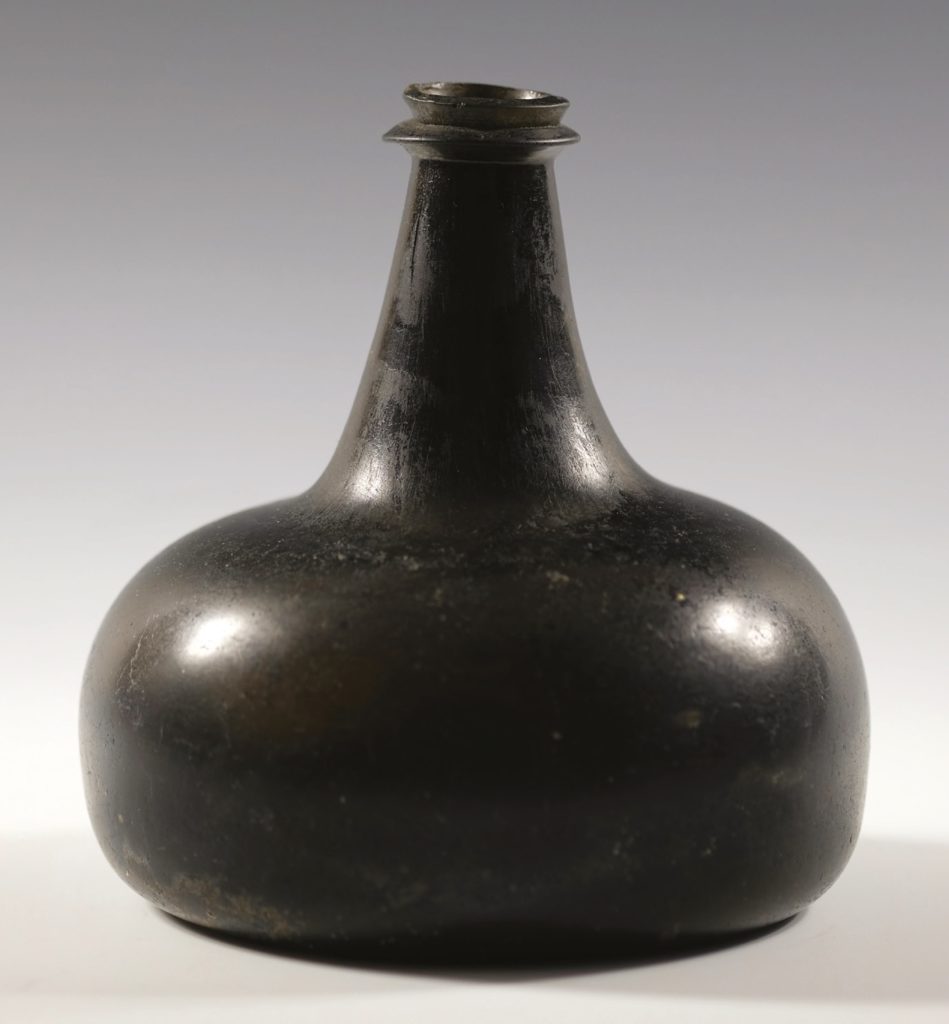 These early decanters were often clear glass versions of the squat onion or shaft and globe wine bottles (above) but with longer, narrower necks and, occasionally, with a loop handle attached. However, late 17th-century serving bottles are rare and few survive outside museums. 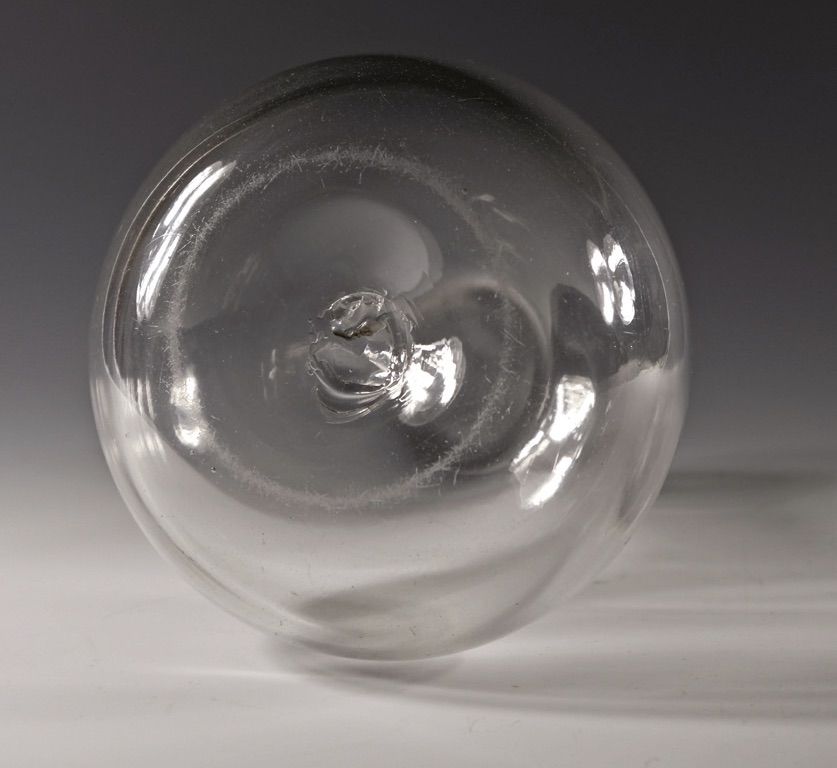 From the mid 18th century, decanters tended towards the plain shaft and globe serving bottle. Note the high kick and pontil scar to the base (above). The pontil scar is the rough surface on the base of a glass object where the pontil iron was attached, which was often pushed upward making a kick, in order to stop the scar from scratching a polished surface.

The style of these serving bottles evolved into the octagonal and various forms of cruciform bottles which were popular at the time.

The English octagonal bottle, or straight-sided mallet decanter, became popular from 1730. The large, six-sided, long-necked bottle included an early single string rim. Prior to the development of corking machines, or fitted glass stoppers, early bottles had a thin rim of glass around the neck to enable a muslin cloth or cork to be fastened by wire or string.

The bottle would have been made by blowing molten glass into an iron mould. Occasionally, these bottles come with a handle and pouring lip, but such additions are rare and hence command a high premium when they appear on the market.

From around 1730 to 1750, a new shape of serving bottle made its appearance – the cruciform, so named because of its cross sectional appearance when viewed from underneath. 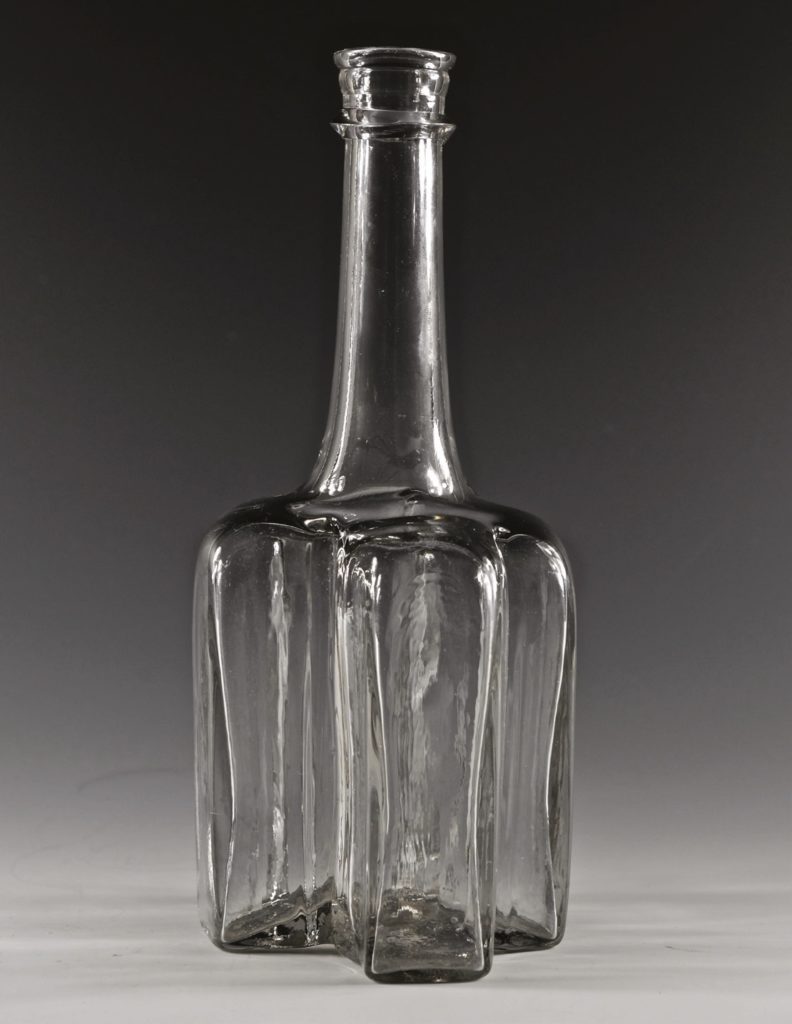 The new shape may also have evolved in order to provide a larger surface area, thus rapidly increasing the cooling effect when placed in wine coolers. There are many variations of this form, the earlier ones being the true cruciform, with the slightly later versions being more box shaped with straight sides, vertical grooves and a string rim made up of several trails of glass. 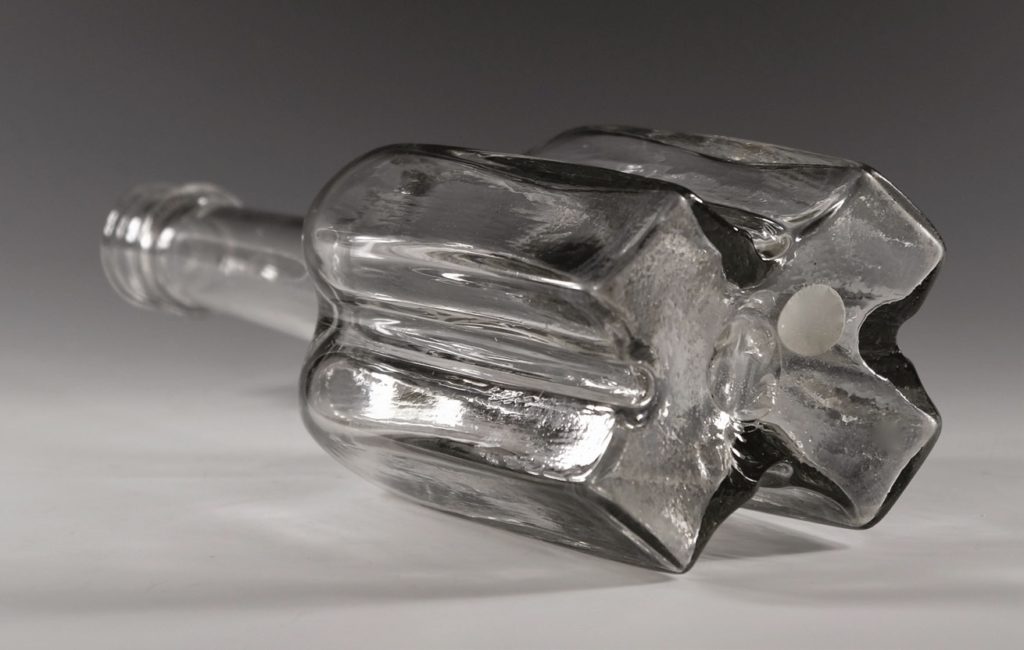 Both decanters below have single blade string rims and the cruciform version has several concentric rings to the top of the neck, as does the shaft and globe serving bottle.

The body of later versions is slightly flattened and thus less of a cruciform shape. However, it is a very appealing bottle with a single blade neck rim and probably dates from around 1740/50.

The late 18th and early 19th centuries saw a progression in decanter styles from the shouldered decanter with spire stoppers of 1760, and the mallet or sugar loaf decanter – normally with a clipped disc stopper – from 1770, to the taper decanters – with a facet-cut disc stopper – dating from 1780 to 1800.

The early 19th century saw the introduction of the classic decanter with three neck rings (neck rings being trails of glass applied around the neck of the bottle in order to assist a firm grip) with either a bulls eye or mushroom stopper, which we are more familiar with today. 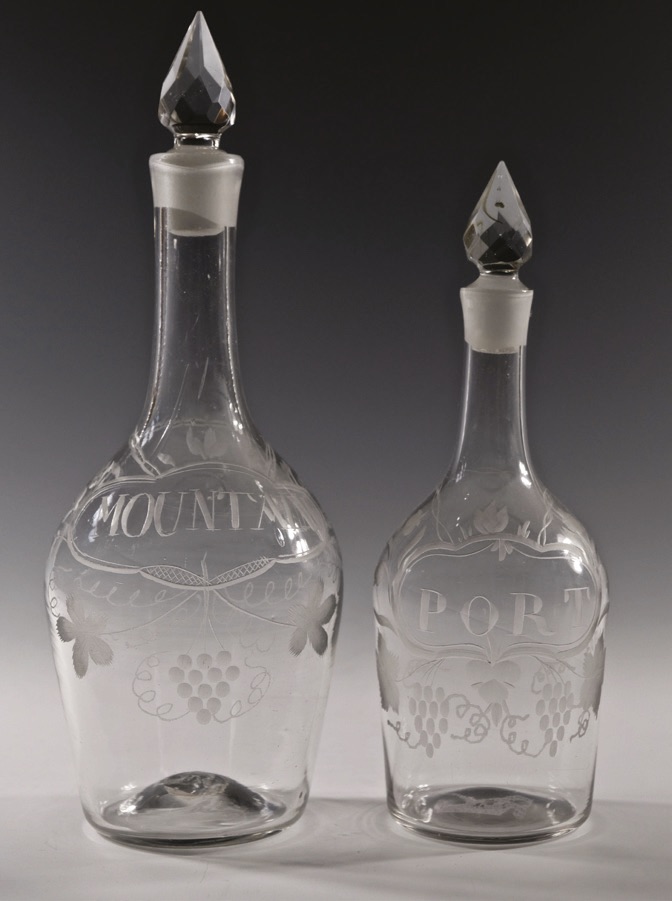 English shouldered decanters with faceted spire stoppers date from 1760 (above). It was the custom at the time to engrave the name of the intended contents on a faux label on the body of the decanter. Names commonly found are claret, lisbon, white wine, port and madeira.

Rarer types can be found with facet cutting all over. These early decanters are quite sought after by today’s collectors and also rare labels and fine facet cut examples command quite high prices.

However, facet cutting to the neck, as seen on the mallet decanter with faceted-cut disc stopper, (below)c. 1770, serves the joint purpose of decoration and providing a better grip compared to the slender neck of the shouldered decanter. 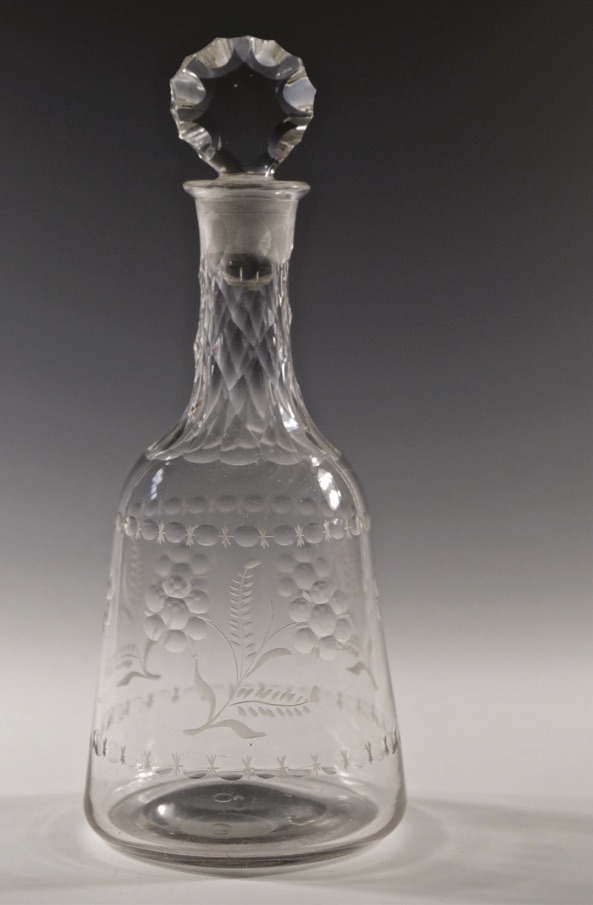 Coloured decanters are also found in this form, usually in blue, with green examples being rarer. It is around this period that we see the introduction of a pouring lip, which becomes more pronounced as we move into the early 19th century.

By the end of the 18th century, the decanter became lighter and more elegant with a cylindrical tapered body. These tapered decanters came in a variety of colours such as blue, green and amethyst, however, plain flint was the most common. 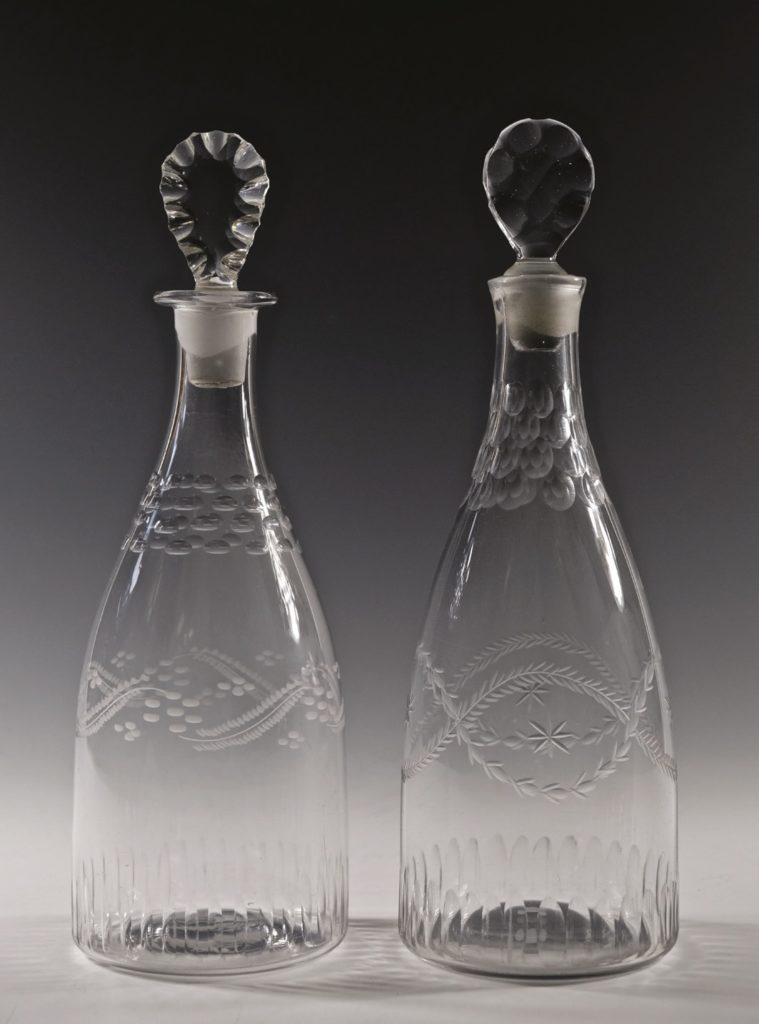 Some are highly decorated with cutting and engraving while others are just plain, simple bottles with little or no decoration. The shape of stoppers varies considerably. The most common are the faceted discs or lozenge stoppers (above), and both decanters have cut decoration around the neck and engraving to the body. The decanter on the left having a more pronounced pouring rim.

The 1820s and 1830s saw the introduction of the classic shape decanter with three neck rings (below). They came in two main forms. The slightly earlier version is this plain bulbous bottle with three neck rings and fitted with a bullseye stopper, which are highly sought after today as they show wine to good effect. 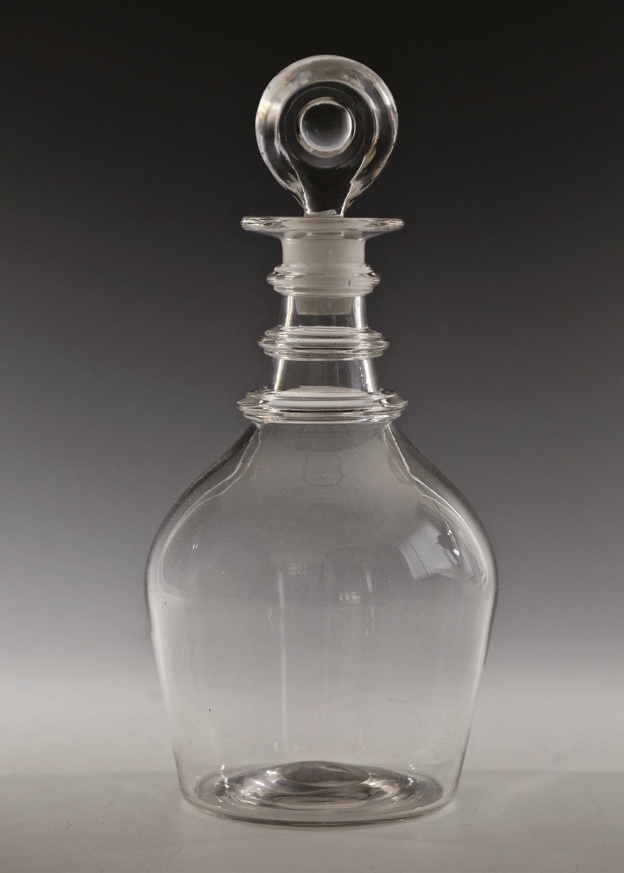 The slightly later version (below) has a similar shape but is cut with narrow basal flutes and wide shoulder flutes, with three neck rings and a fitted cut mushroom stopper. 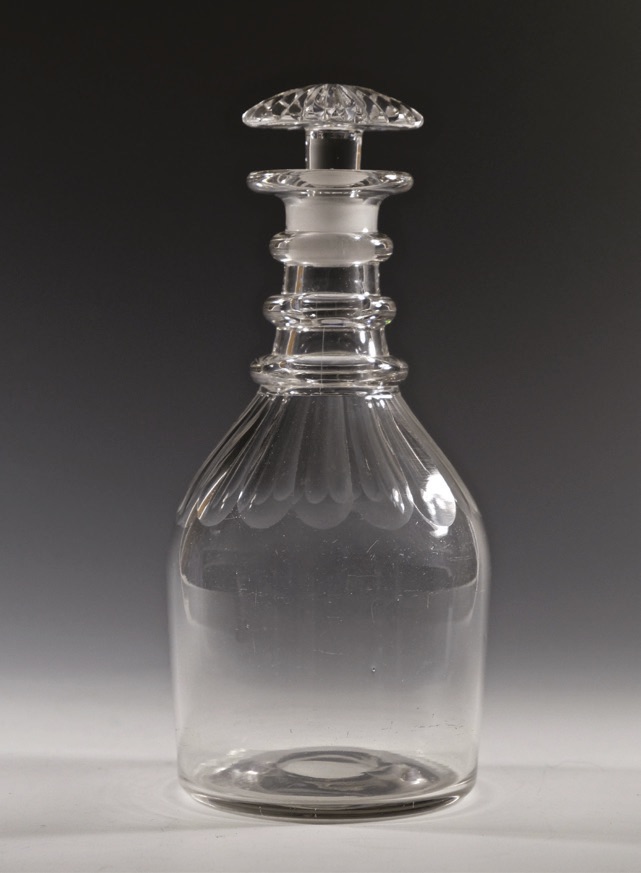 Coloured decanters of this form were made but in much less numbers, hence they are rarer and harder to find. While these are the two basic forms, there is a wide range of similar-shaped decanters with various numbers of neck rings and an endless variety of cut decoration.

As the fashion for decanters is constantly changing, heavily-cut examples can be purchased at a reasonable price today.

Small coloured decanters were popular in the late 18th and early 19th centuries and vast numbers of these were produced. These small, club-shaped decanters are found mostly in blue glass, although, green and amethyst examples can sometimes be found.

They are usually decorated with gilded faux labels for brandy, hollands (Dutch gin) and rum among others.

They usually came in sets of three or four in either a leather-covered metal or a papier-mache frame.

They are not as popular with collectors due to their small size which doesn’t take a full bottle of wine.

However, they are over 200 years old, pleasing to look at and would make a nice collection of various labels, colours and shapes. Furthermore, they can often be found reasonably priced.