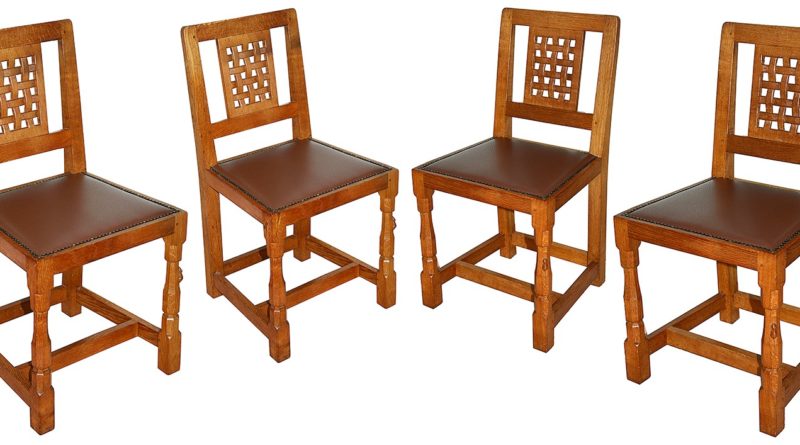 A private collection of Mouseman furniture, by the sought-after designer Robert ‘Mouseman’ Thompson, will go under the hammer at Catherine Southon Auctioneers & Valuers in November.

The collection comprises such items as:

Also included in the sale is a Mouseman cheese and bread board set, and a pipe tray amongst other items.

The items were collected by a Yorkshire couple who were looking for some good quality and local furniture for their home in the late 1970s. They fell in love with the signature mouse on each piece and started collecting from there.

Commenting on the collection, auctioneer Catherine Southon said, “It is wonderful to see a collection ranging from coffee table to cheese board, rather than just one or two Mouseman pieces, and to see the original bill of sale and the Mouse stamp on the envelope is the cherry on top of the cake. The market for Mouseman goes from strength to strength, and because of the high prices Mouseman demands, there are many fakes on the market. It’s a bonus to have good provenance as this collection has.”

Robert ‘Mouseman’ Thompson was known for creating extraordinarily well-crafted furniture out of English Oak. The church mouse carved into every authentic piece of Mouseman furniture has become an iconic symbol of quality and dedication to craftmanship.

Alongside the collection of Mouseman furniture, a wonderful ‘Squirrelman’ set of two oak chairs will be available in the sale. The elbow chairs have been carved with a Yorkshire Rose by Wilf ‘Squirrelman’ Hutchinson – one of the ‘Yorkshire Crittermen’ who worked in the same tradition as Mouseman and trained alongside Thompson in his Kilburn workshop. The Squirrelman chairs are expected to sell for £200-£300.

The sale takes place in Surrey on November 27.