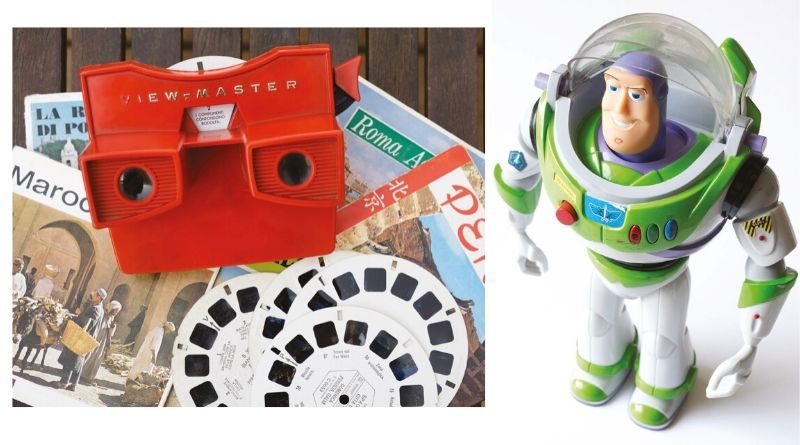 Vintage toys from Christmas Days of yesteryear are back in demand, with prices rising for boxed and pristine examples. While modern parents scramble around to bag the last Paw Patrol video games and LOL dolls, we take a look at some old toys that have retained their appeal for a grown-up audience. 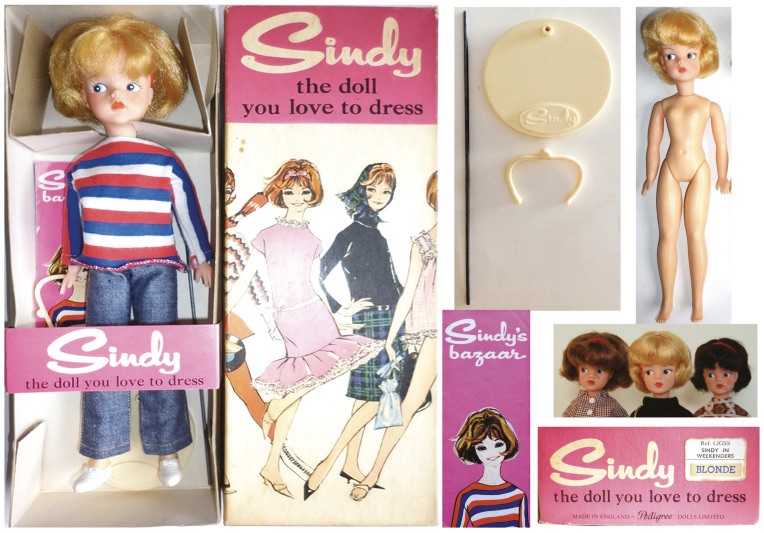 Sindy first appeared in 1963 and soon became the bestselling toy from British manufacturers Pedigree. The original doll came in a thoroughly modern ensemble of red, white and blue striped top with matching jeans and sneakers. 70 per cent of Sindy sales were made up of her accessories in the form of ‘the kind of clothes every grown-up girl longs for.’

With Audrey Hepburn and Jackie Kennedy-inspired outfits for every occasion from ‘Sleepy Time’ to ‘Dream Date’ to ‘Shopping in the Rain’ to ‘Pony Club’, this was undoubtedly the case. As well as the eight outfits, 1960s Christmas lists would have included extra accessories like nylons and scarves so Sindy could be immaculately turned out whatever the weather.

The most coveted Sindy outfits have sewn-in labels printed ‘Genuine Sindy Made in England’ or  less commonly ‘Genuine Sindy’. As well as authenticity and condition, collectors in the know look for details such as the painted flat metal poppers on her outfits and the less common side parting in her hair. Sindy production moved to Hong Kong in 1965, so the rarest and therefore most valuable Sindy dolls date from 1963 – 1965. An original, boxed Sindy doll in great condition can make up to £500 at auction. 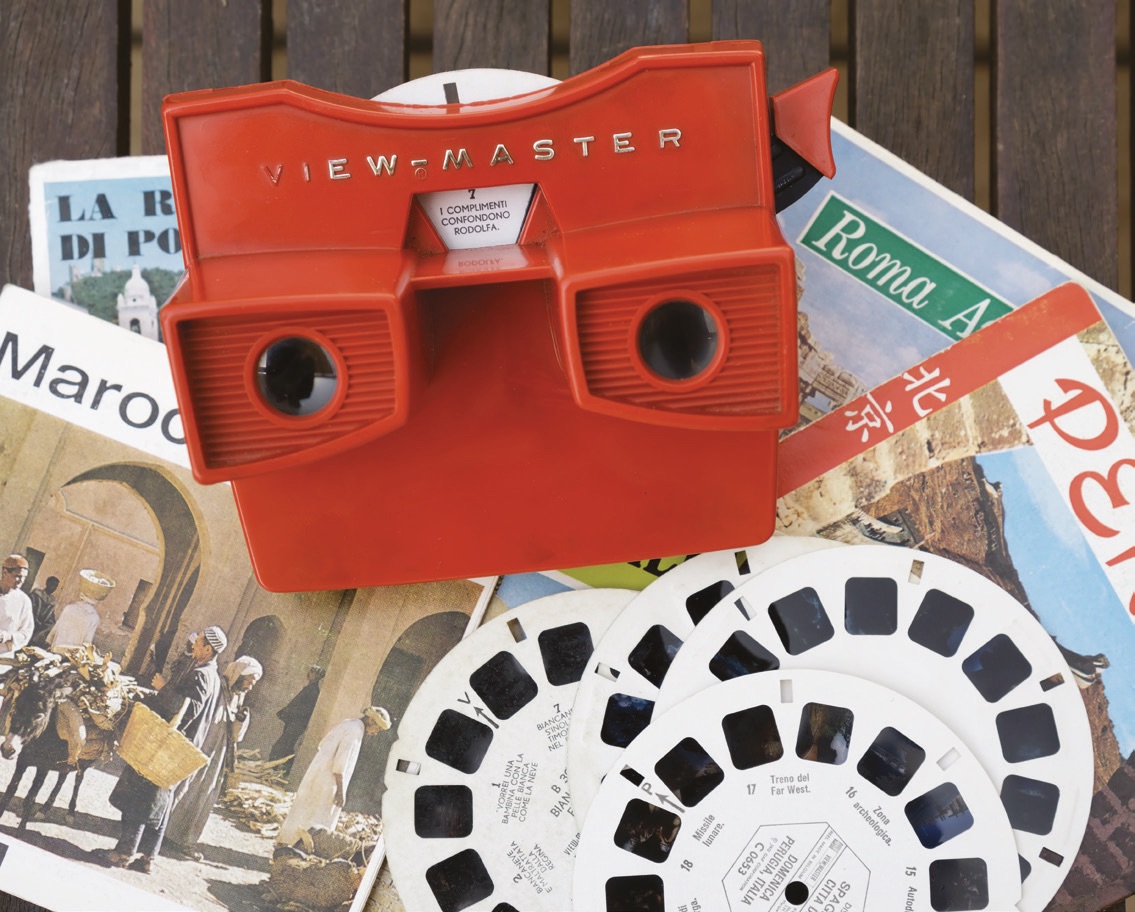 Everyone of a certain age will remember the View Master hand-held slide viewer. First produced in 1939 by Sawyers, an American slide projector and scenic slide company, the View Master soon became its standout, best-selling product. It became a must-have on Christmas lists from 1962 onwards when the original Bakelite model was replaced by the iconic bright red plastic version, which many people remember fondly and seek out at auction to this day.

The popularity of the View Master in the 1960s was also due in part to the explosion in kids’ TV and film at the time. As well as asking Santa for a View Master, children requested Disney, Batman, Doctor Who and Flintstones reels to name a few. Parents keen to give the toy an educational slant could give their children reels depicting everything from the Blackpool Illuminations to the Vatican City.

The fact that the View Master is still produced in the saturated market of today’s high-tech world is testament to its enduring appeal. A modern version should give you change from £10 but a vintage View Master will sell at auction for around £40. 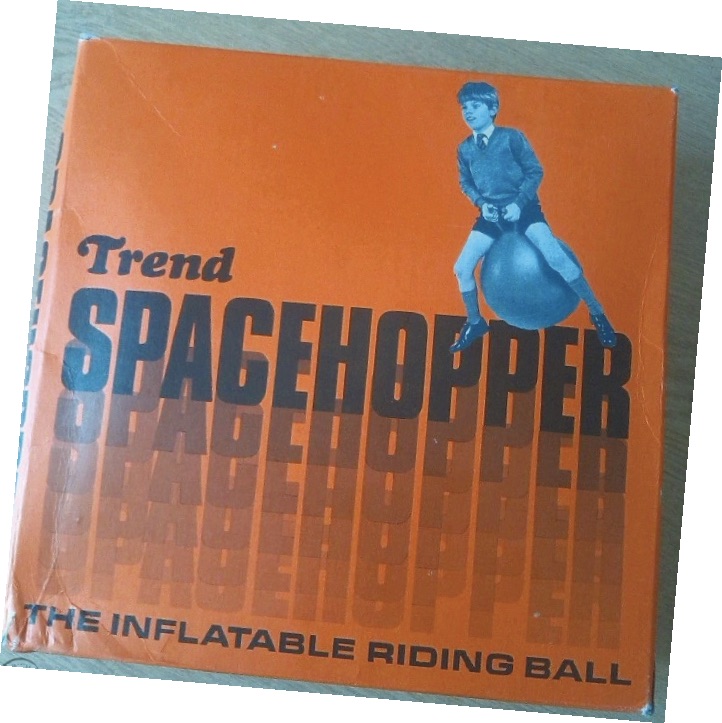 If there’s one thing guaranteed to put a smile on the face of young and old, it’s a bright orange Space Hopper. Parents buying them today will be struck by the fact that these bright orange air-filled balls with a jolly kangaroo face and handles haven’t changed at all since the days of their own Space Hopper races in the garden. Indeed, the Space Hopper first bounced onto the scene in 1968 to become an instant hit with the young and young at heart.

Although versions of the Space Hopper exist all over the world, the iconic orange British Space Hopper was first conceived when directors at toy manufacturers Mettoy happened to see some children having fun bobbing up and down on a floating buoy in a Norwegian quay.

The Space Hopper box has changed over time to fit in with passing fashions and these days an adult-sized version is available for those who wish to revisit those more uncomplicated times spent bouncing around on an orange ball. However, for the ultimate Space Hopper experience what could beat a vintage Space Hopper? And at around £10 at auction, you can pick it up for less than an adult-sized new version would cost! 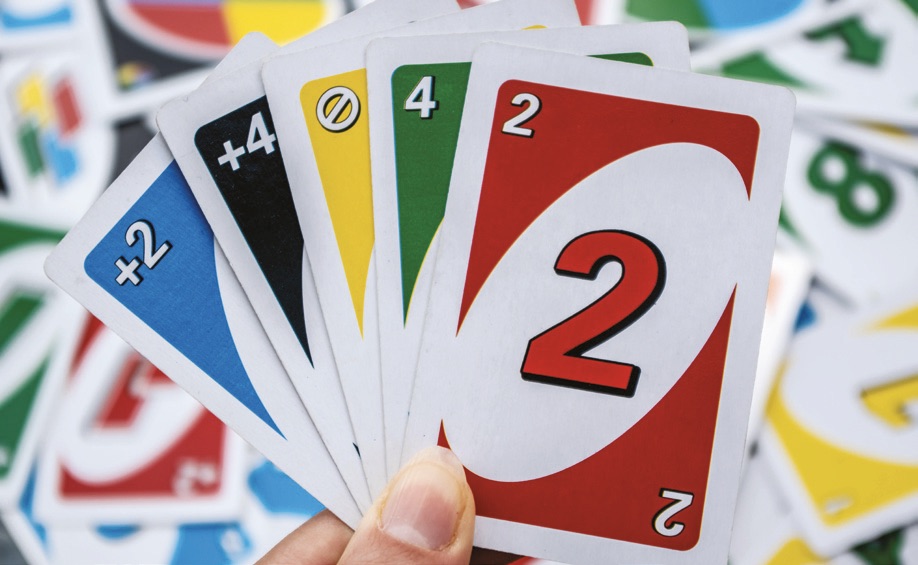 Christmas just isn’t Christmas without a family card game and when it comes to one that will both delight children and engage older competitors it doesn’t get better than UNO, which first became a popular stocking filler in 1972.

UNO is a version of the ‘crazy eights’ family of card games and was first created by Cincinnati barber Merle Robbins who had 5,000 copies made to sell from his shop. After he sold the rights to a group of friends for $50,000 plus royalties of 10 cents per game, International Games Inc was formed to market the simple but addictive game all over the world. In 1992, UNO was sold to Mattel.

Aficionados of the game (or those prone to getting twos sets mixed up) will know that there are many different editions of the original game in addition to sets themed around Harry Potter, Frozen, Star Wars and Superman to name a view. These days, Braille and colour-blind versions are available.

Many people will pick up a new UNO set this Christmas for around £5. However, if you’d like to hold a little bit of history in your hand next time you play, if you’re lucky enough to spot one of Merle Robbins’ original green sets at auction, you could be the ultimate UNO winner by getting it for as little as just £8. 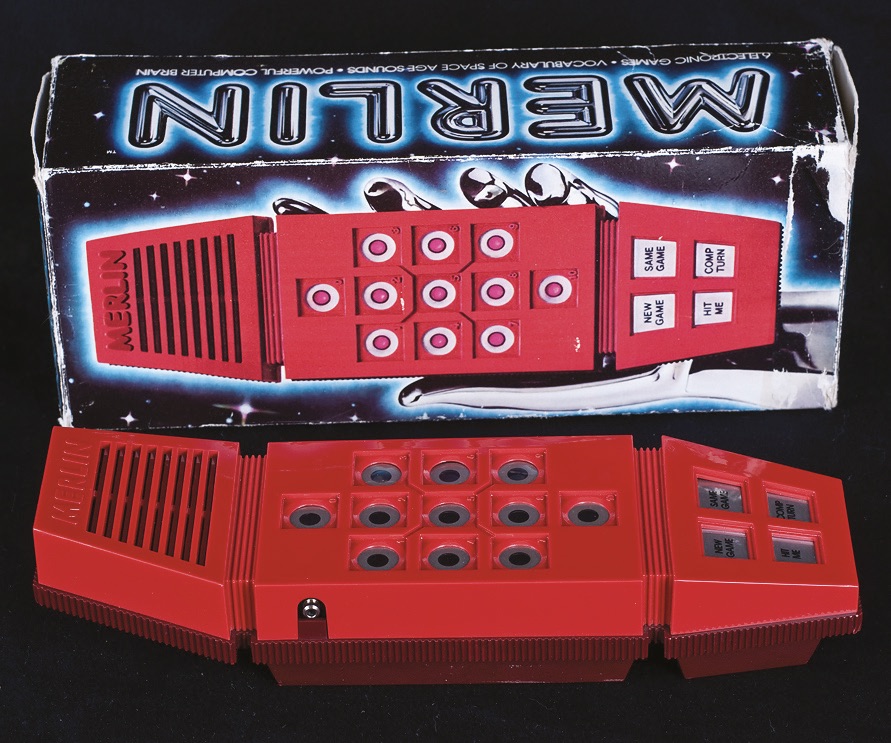 If the kids who have the Nintendo Switch on this year’s Christmas list found themselves transported back in time, the Merlin Electronic Wizard would be the number one item on their wishlist, as it was for budding gamers and technology fans back in the ‘70s.

Parker Brothers launched the game to an enthusiastic audience in 1978 after it was created by NASA employee Bob Doyle and his wife and brother-in-law. Such was the hype around the device, it featured on the Christmas issue of Newsweek and went on to sell over five million copies in its first run, going on to enjoy success well into the 1980s.

The instantly recognisable red, rectangular device was the original handheld games console. Lucky owners of the original version could enjoy six games – Tic, Tac, Toe, Music Machine, Echo, Blackjack 13, Magic Squares and Mindbender. Such was the popularity of Merlin, it was released for a new audience in 2004. Those who spot an opportunity at auction to relive their youth with Merlin can expect to do so for around £50. 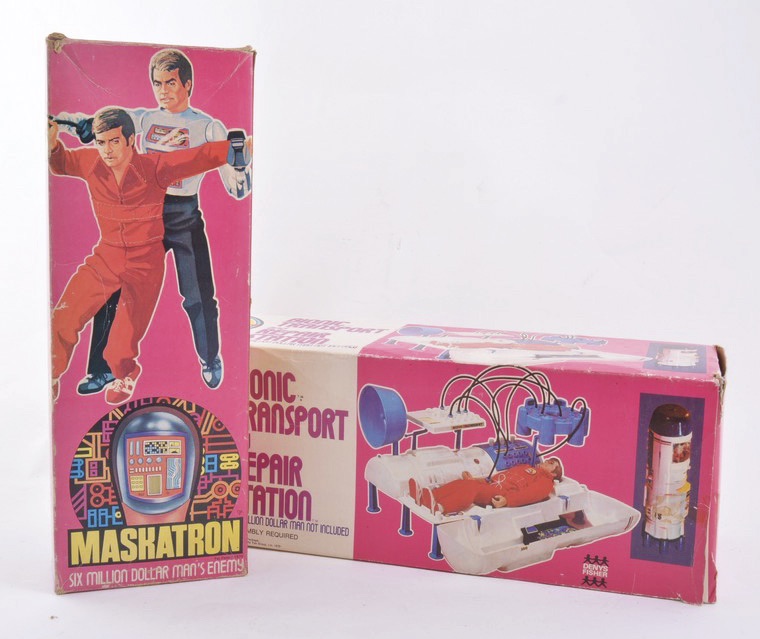 The American TV series, starring Lee Majors and based on the novel Cyborg by Martin Caidin, was one of the most iconic TV shows of the 1970s. So it made sense that the line of merchandise that followed suit would be in hot demand, particularly the action figure of the Six Million Dollar Man himself, which was on many a Christmas list in 1975.

Three versions of Steve Austin, AKA the Six Million Dollar Man, were produced by the American toy manufacturer, Kenner toys, who also famously produced the original Star Wars figures. The success of the Steve Austin figures led to the production of other characters including Big Foot, Oscar Goldman, Maskatron and the Bionic Woman. 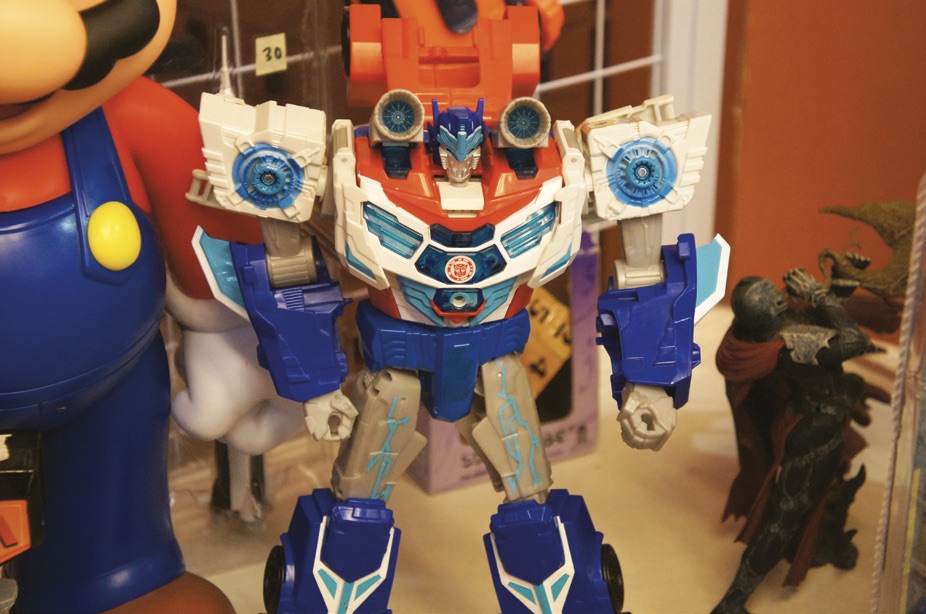 The six Transformers films spanning from 2007-2018 have their roots in the TV animation of the 1980s, which was avidly watched by a whole generation of children. Thanks to the success of the film franchise, Transformers toys including action figures of Optimus Prime will be on many a modern Christmas list this year.

However, collectors who associate the superhero robot with the TV show of their childhood would love to find an original 1980s Optimus Prime under the tree this Christmas. Today, an original Optimus Prime figure could reach £400 at auction. 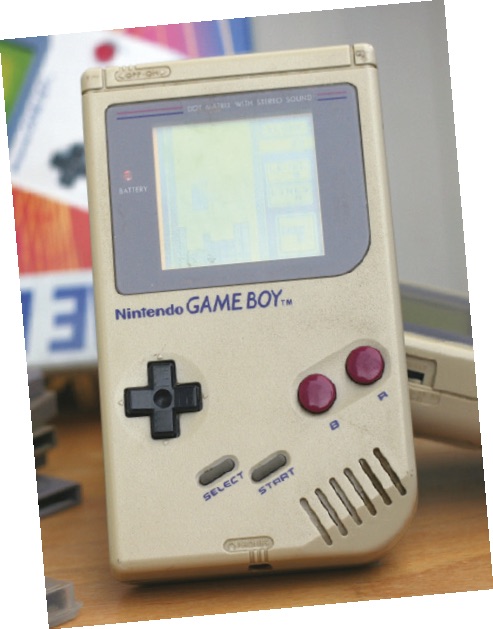 The first generation Game Boy caused a frenzy when it launched in Japan in April 1989 and in the USA in the summer of 1989, where it sold 1m units in a matter of weeks. When it reaached the UK a year later, it became one of the most sought-after Christmas toys in history.

The grey handheld console with its green dot matrix screen and trademark accents of magenta, black and blue are now an instantly recognisable as the symbol of the late ‘80s and early ‘90s. The fact game cartridges included Tetris and Super Mario Land only fuelled demand for this must-have item.

Retro gaming is increasingly popular with those who want to relive the gaming experience of their youth, and a sealed original Game Boy could be expected to sell for £400 at auction. 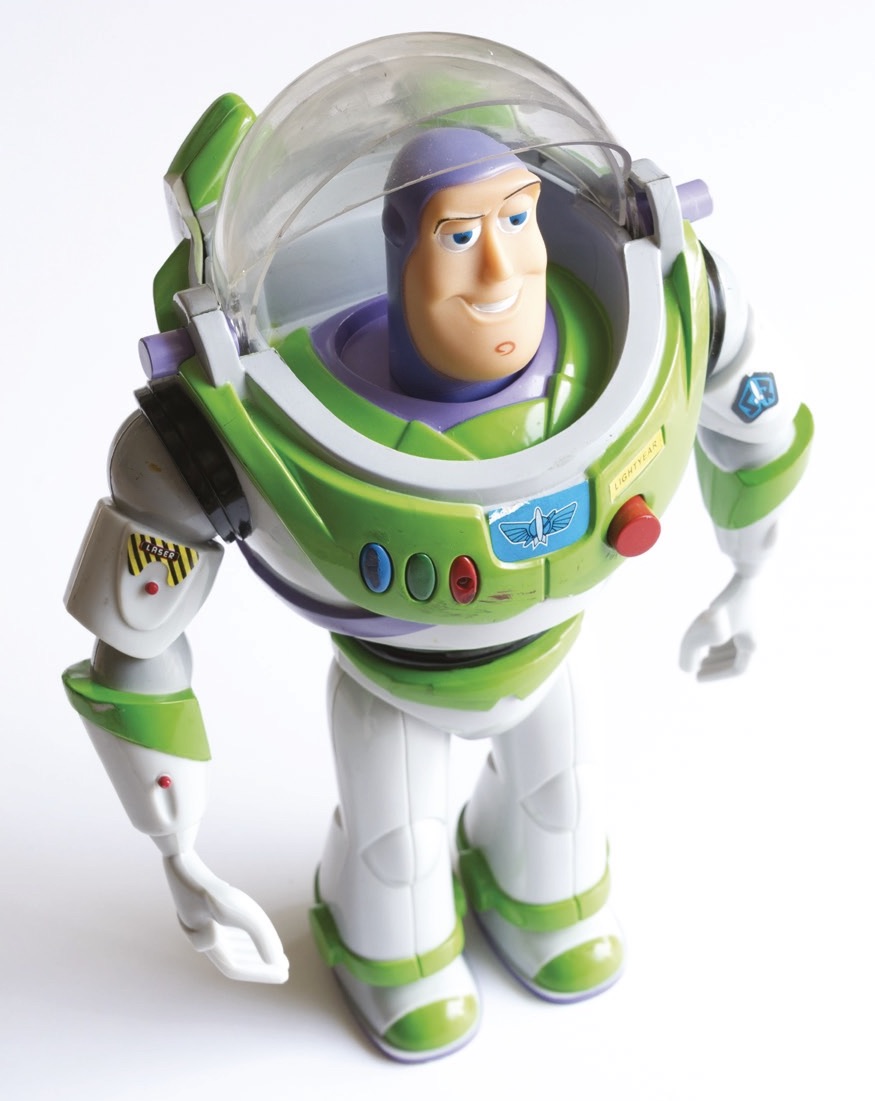 Parents who spent Christmas 1995 trying to track down a Furby or a Tamagotchi were in for yet more stress in 1996 when the success of Toy Story meant that people were going to infinity and beyond in order to track down a Buzz Lightyear with parents offering up four times its retail value.

Buzz remains a perennial Christmas present favourite, especially in years such as this, which saw the release of a new Toy Story film. However, in the collecting world original is always best and a 1996 Buzz Lightyear figure will fetch around £40 at auction.