A romantic Regency Valentine letter from February 14th, 1818 has sold for a four-figure sum at a Derbyshire auction.

The illustrated letter was sold at Hansons Auctioneers when one lovestruck bidder pushed it well beyond its pre-sale estimate of £600-£800 to hammer down at £1,300.

New research has potentially revealed the name of the suitor – and what happened next in the tale of romance worthy of a Jane Austen novel in her Regency era.

The rare hand-painted, 202-year-old letter featuring hearts, flowers, Cupid and lovebirds, was sent to Miss L Shafe, of White Row, Spitalfields, London. She received the following message under the title, ‘An affectionate Pledge of Unfeigned Attachment’:

‘From him who upon the return of another Valentine’s Day, looks forward with pleasure to the time when his hopes may be realised; & at the altar of Hymen (Greek god of love) he shall receive the hand accompanied with the heart of her for whom he feels – not a wild and romantic love, which abates after a short acquaintance – but an affection which time increases rather than diminishes.’

A reader was so touched by the story she set to work to find out more – and contacted Hansons Auctioneers with the romantic results of her research. The woman, who did not wish to be named, said, “When I saw there was a name and address in an area of London I knew well, I couldn’t resist seeing if I could find her. I thought that perhaps having an idea of the couple involved would add extra interest for whoever bought the card.

“I looked for the marriage of Miss L Shafe and found Miss Lydia Shafe who married Edmundus Burn at St Leonard’s Church, Shoreditch, on December 28, 1819. The witnesses were Mary Burn and Clifford Elisha, possibly the church verger. Edmundas was a stationer and bookbinder from Birmingham while Lydia was from Shoreditch in London. They went to live in Brighton and had five children.”

Jim Spencer, works on paper specialist at Hansons, said, “We all hoped for a happy ending and it would be wonderful to think that Edmundus, a down-to-earth but rather romantic Brummie, much like me, won his lady’s heart with one of the oldest and most beautiful Valentines in existence. 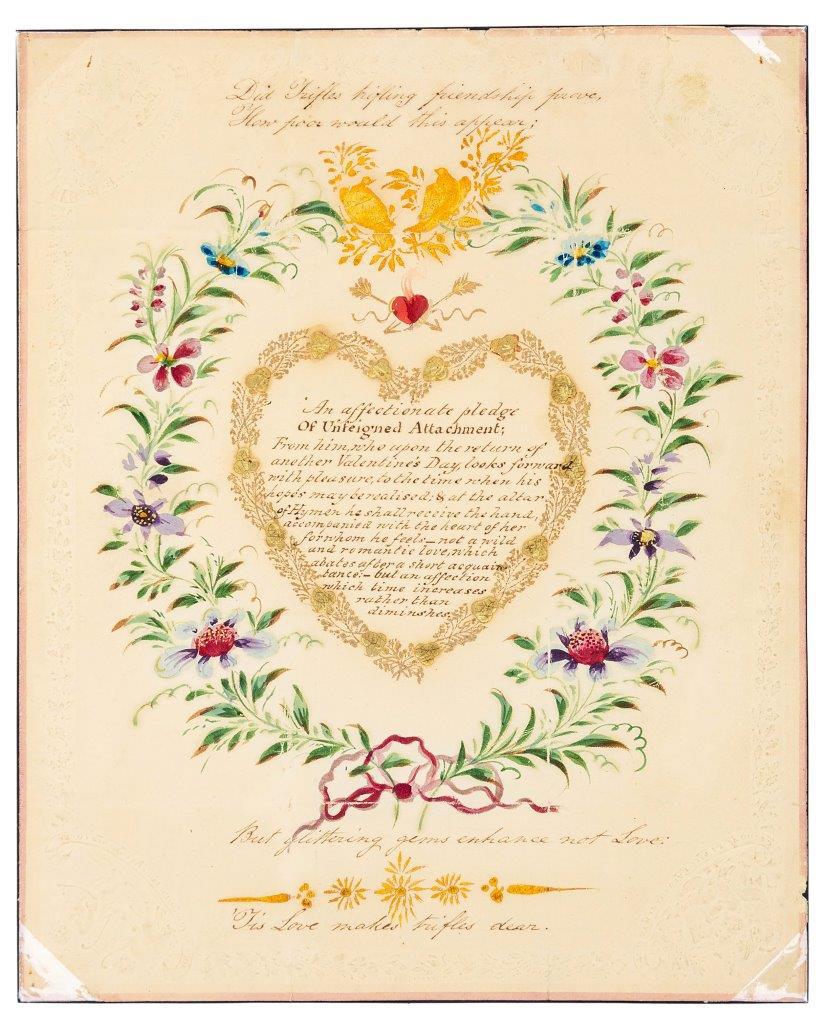 “Admitting you don’t feel a wild, romantic love could have been construed as a dangerous move but as the Valentine was sent in 1818 and Lydia Shafe married in 1819 there’s a very good chance his message worked its magic.”

The rare Valentine has been owned by Gavin Littaur, from London, for more than 20 years. It’s in excellent condition for its age as the keen collector carefully stored it in an album and protected it from sunlight.

Mr Littaur said: “I’m a bit of a romantic and just talking about this Valentine rekindles my love for it. It’s beautiful – exceptionally so, in fact. One of the reasons I’m selling it now is to show the collecting world what an outstanding early Valentine really looks like.

“I bought it at auction more than 20 years ago. I don’t recall exactly how much I paid for it, but it was expensive at the time. George III would have been on the throne when this embossed letter was made by Dobbs of London more than 200 years ago. It’s one of the earliest postally-used Valentines in existence.

“Any pre-Victorian one is very rare. I once owned a Valentine from 1801 but it wasn’t as stunning as this one. I’ve been a collector of postal history for decades and it’s the finest I’ve ever seen. Collecting is a bit like a marriage. The most passionate moment is the first time you see something special, like this Valentine. It’s also very satisfying, when one actually acquires the item. But, over time, the intense excitement gradually fades.

He added, “Though I like to look at the Valentine and occasionally show it to friends, when you have owned something for decades the time comes when you want others to enjoy it, while you are still around.”

The Regency Valentine on folding paper bears the manufacturer’s watermark, Dobbs 1815, and its original red sealing wax. As well as the central romantic verse within a gilt love heart, it has an embossed floral border and a vibrant watercolour floral border surmounted by two gilt doves and a heart pierced with crossed arrows.