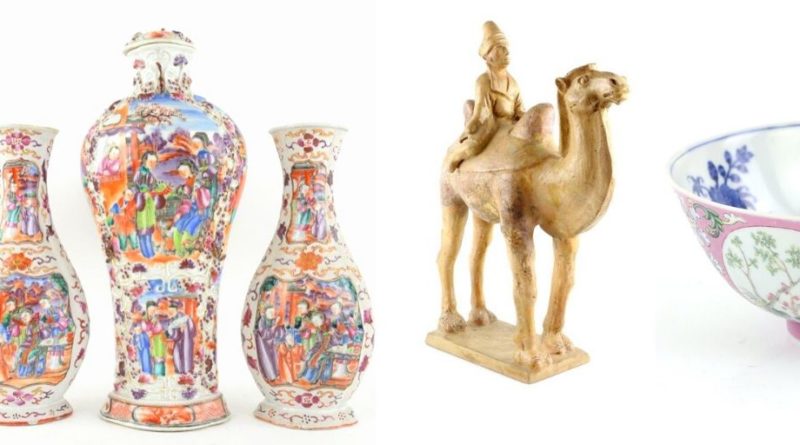 Surrey auction house Ewbank’s is to stage a live online-only Asian Art sale on April 30 to meet demand during the current challenging conditions.

One of the most valuable pieces to go under the hammer is a pink ground, famille rose medallion bowl, measuring 14.5cm diameter, which has a pre-sale guide price of between £1,000 and £2,000. The underglaze blue decorated interior depicts a rabbit in a garden beside floral sprays. The exterior bears four circular medallions containing designs of plants or trees; and the base has the underglaze blue six-character mark of The Daoguang Emperor.

A Chinese export silver composite tea service has been estimated at between £600 and £1,000. It comprises a matching set of two teapots, both by Zeewo, Shanghai, the tallest standing 21 cm high, a sugar bowl and a cream jug, both probably by Tuck Chang & Co Shanghai. The teapots are decorated with cherry blossom and fruiting branches, the cream jug and sugar bowl decorations depict dragons.

A number of Chinese urns and vases are also set to sell, including a large Gansu style jar or urn, which stands at 45cm high, without its metal stand. It is decorated in the Yangshao phase style with bold circular motifs containing a variety of criss-cross, linear and dot motifs surrounded by circular and curvilinear designs. It has a guide price of between £500 and £800.

An elegant, associated collection of three Chinese export famille rose vases has been valued at between £400 and £600. Each is decorated with panels depicting Manchu/Chinese figures; the largest vase is also moulded in high relief with designs of scrolling foliage and tree squirrels. The tallest vase stands 36cm high, the others are 28cm high. 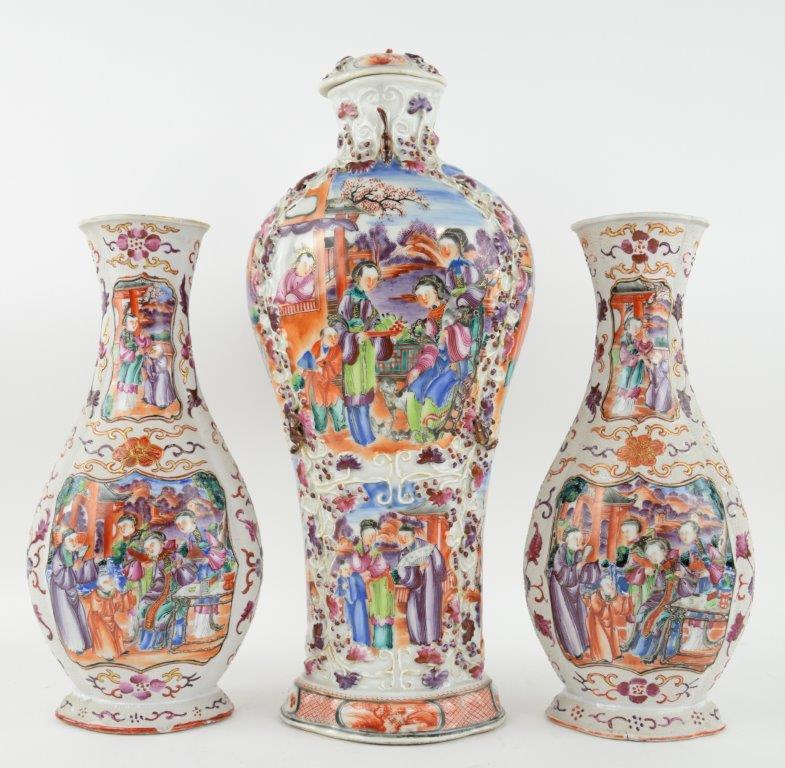 Among the figurines on sale is an impressive glazed Chinese pottery sculpture of a bearded, Western Asiatic camel rider on the back of a tall Bactrian camel. It has been valued at between £400 and £600. It stands 54cm high, and dates from the Tang Dynasty. 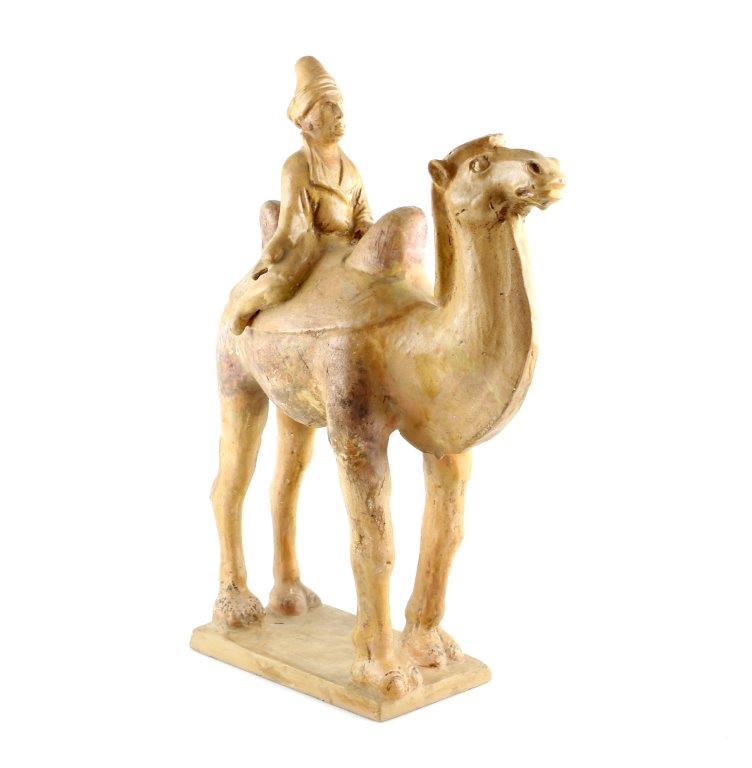 A Blanc-de-Chine standing figure of Guanyin, The Bodhisattva of Mercy, wearing a typical high chignon over the cowl, has a guide of between £300 and £500. It dates from the time of the Qing Dynasty, has detachable hands and is fixed to a fitted wooden base. Overall height including base 49 cm.

A Japanese box and cover, with kuro-nuri interiors and base, decorated with the sun rising over a mountainous landscape with clouds, pine trees and bold floral designs, has an estimate of between £400 and £600.

There are also many rare and sacred objects in the sale. These objects underline the Buddhist Devotion of the Himalayan region, which has a long and rich art history, producing illuminated manuscripts since at least the early 11th century. The sacred art of Tibet, Nepal and Bhutan carries a dignity that is appropriate to the majestic mountains that are the backdrop for its artists.

It is also one of the most intricate areas of collecting, where it is believed that studies of both Tantric Buddhist, and Hindu thought are necessary for a better understanding of both sculpture and image.

Among the intriguing items already consigned for sale are three objects of note: a sculpture of Vajrapani; a thangka given to the vendor’s husband by His Holiness, The Dalai Lama; and a Buddhist text, thought to be from Nepal.

The elegant sculpture of Vajrapani carries an estimate of between £1,500 and £2,500. The piece portrays this important Bodhisattva, who represents the energy of the enlightened mind, seated on a typical lotus base. Ewbank’s Asian art specialist James Hammond, commented: “In this piece, Vajrapani is holding both the vajra – the thunderbolt of Tantric Buddhism – and the ghanta – a bell for devotional focus.  It is the presence of both these objects that allows us to identify the subject of this sculpture with such clarity.”

The thangka, a Tibetan Buddist painting on cloth usually depicting a deity, scene or mandala, has been valued at between £500 and £1,000.

It was a generous gift from the 14th Dalai Lama to Major William Towill of the 3/9th Gurkha Rifles during an audience with His Holiness at a Sikkim Monastery. The outer register of the mandala design apparently portrays the sky burial or Jhator, a feature of Tibetan Buddhist faith that symbolises the impermanence of life.

The Himalayan text, estimated at between £100 and £200, is probably written on palm, is thought to be from Nepal where in the Kathmandu Valley, the scholars of Mahayana Buddhism have copied large numbers of sacred texts in Sanskrit, Bhujimol or Newari. All three styles of lettering are known in Nepal, contributing to the significant writings of Sutra, Mantra and other non-secular learning.

Hammond explained: “Dr. Pratapaditya Pal, the great authority on Tibetan and Nepalese works of art, gives 1015 as the date for the earliest known manuscript from Nepal and Eastern India; whilst this manuscript does not have this age, it does offer a text from this important and long-established form.”

The sale on April 30 will feature around 250 lots and includes porcelain, pictures, swords and lacquers, with a broad range of estimates.

Secular Chinese art also remains a strong area, with collectors worldwide hunting for the masterpieces of Imperial Porcelain, for the unforgettable images of Xu Beihong and Qi Baishi, and for the artefacts used by the Literati and Scholar classes of China’s long history.

The Ewbank’s sale offers a variety of porcelains, not only for the Chinese market, but also for the export market to Europe. Chinese Ceramics from the Master Potters, who were working in post Imperial China are known as The Eight Friends of Zhusan, are now a very well-established market.

“The implication could not be clearer, that the artistic quality of Chinese Porcelain has continued, even without the Imperial support, at The Jingdezhen kilns,” said Hammond.

“And, Japan is not forgotten, either. The export porcelains of underglaze blue and Imari patterns, that have graced European interior design since the Dutch Traders first loaded their sailing vessels, moored in Nagasaki Bay, have remained popular.”

Principal of Ewbank’s LLP Chris Ewbank, said: “With everyone staying home, this is the ideal time to sort through attics, cellars and shed for any unwanted – but potentially valuable – items for sale at auction. We cannot be open for sale valuations in person, as we normally are, but we can do them by email.

“The team and I are all working remotely, as the sale room is closed following government advice, but are still able to supply valuations on email free of charge, so do get in touch and send us photographs of items of interest.”