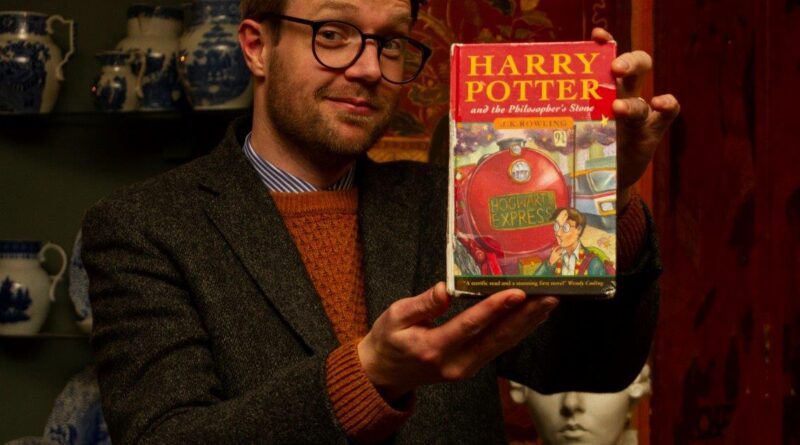 Three first edition Harry Potter books rescued from a school skip 12 years ago could fetch thousands when they go under the hammer later this month.

A hardback first edition of Harry Potter and the Philosopher’s Stone – one of only 500 in the first ever print run – and two paperback versions of the same book have been unearthed by Hansons Auctioneers.

Hansons has had past success with Potter books, including the discovery of two other rare Philosopher’s Stone hardback first editions, which together made £80,000 at auction. The May sale has 17 Potter auction lots. These include a total of five paperback first editions of Philosopher’s Stone, each worth between £3,000-£5,000, plus books signed by author J K Rowling. For example, one lot includes copies of Philosopher’s Stone and Chamber of Secrets, both signed by Rowling, estimate £500-£800. In 1998, the seller went on a school trip to Waterstones in Nottingham where the author answered questions and signed books.

But the star of the show is the first edition hardback of Philosopher’s Stone as only 500 were published in 1997 when Harry Potter made his debut.

The book together with two paperback first editions would have been lost in landfill but for the actions of a Buckinghamshire school teacher who couldn’t bear to see them go to waste when she spotted them in a skip where she used to work in 2008.

The seller, a 65-year-old grandmother who did not wish to be named, said, “I love books and reading and it just seemed awful to throw them away, so I picked up about five Harry Potter books. I thought they might be useful for my children or grandchildren in the future. It was better than seeing them go to waste.

“At the time, I had no idea they were of any value, and neither did the school. They’d been well read and the school always ensured its library was pristine for Ofsted inspections. There were lots of other things in the skip, too. I think the school originally had 10 Harry Potter hardback first editions. I don’t know what happened to the other nine.

“I took the books home and they ended up in the loft. Then about four years ago my son told me he thought the books might be valuable. He investigated and a London business offered £4,000 for one of the paperbacks there and then. But they just went back into the loft. Last year we were watching a TV interview with Charles Hanson, owner of Hansons Auctioneers, about the sale of a Harry Potter first edition which sold for thousands at auction and decided to get in touch.”

Jim Spencer, books expert at Hansons, said, “We’ve had phenomenal success in both finding and selling Harry Potter books in the last 12 months. Hardback first editions of Philosopher’s Stone are as rare as hens’ teeth. They’re the holy grail for collectors, so I was amazed to find one last summer. It was a former Staffordshire library book bought at a tabletop sale for £1 and it made £28,500 at auction in July 2019. That led to a multitude of Potter finds and sparked around 50 emails a day from people all over the world who thought they might have a first edition.”

He continued, “Unbelievably, it also led to the discovery of another hardback Philosopher’s Stone first edition last year which, because it was in better condition than the first, sold for a total price, with buyer’s premium, of £57,040. It was brought to me in a locked briefcase by a Lancashire family. I felt like I was dealing in smuggled diamonds. To find a third one is amazing – just another 497 to go. The reason why I’ve put what may seem like a humble estimate of £8,000-£12,000 on the latest copy is because the binding is damaged. Internally it’s very good, though, and could surprise us.

“The paperback first editions are in good condition and could fly above their estimates. The vendor is also selling two other Harry Potter books rescued from the skip, a Chamber of Secrets hardback first edition, lacking its dust-jacket, and a Prisoner of Azkaban first paperback. They are being offered as a pair at £200-£300.”

Of the 500 hardback first editions of Harry Potter and the Philosopher’s Stone printed in 1997, around 300 were sent to British schools and libraries and some reached private book shops. They all contain various printing errors, corrected in later versions.