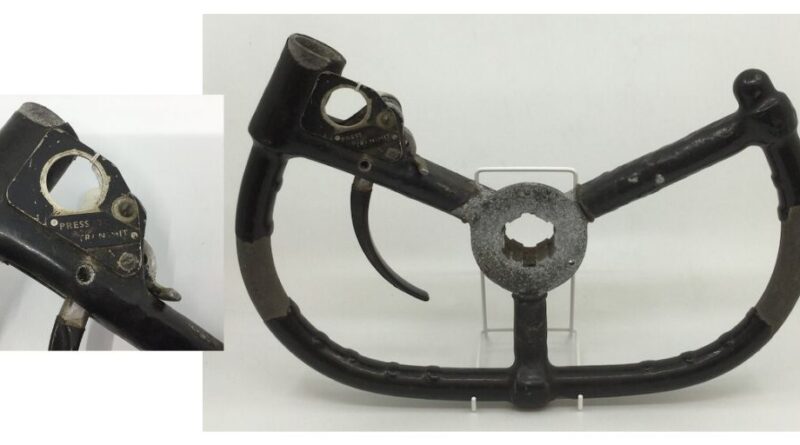 Auctioneers Hansons London discovered the rare militaria find, which is set to go under the hammer on June 27, and collectors could send the price flying high as opportunities to buy them are so scarce.

Also known as a yoke, the Lancaster Bomber control wheel dates back to the 1939-45 conflict and comes from one of Britain’s most famous WW2 aircraft. It has an estimate of £200-£300 but the auction experts think the price could soar higher.

Chris Kirkham, associate director at Hansons London, said: “The vendor found the item in the loft. It had been stored at the home for around 50 years. Her late husband came across the wheel at an aircraft crash site in Kent together with other plane parts we are selling in Hansons London’s June auction, all from the Battle of Britain period.”

Hansons’ militaria expert Adrian Stevenson, said: “This is a rare, original and highly sought-after item taken from the cockpit of the iconic Second World War bomber.  These seldom come onto the collectors’ market.

“This example is in unrestored condition and has the original covering to the yoke. It is complete with its brake lever and mounting for the radio transmit button.”

The Lancaster became famous for night-time raids over Nazi Germany. More than 55,000 aircrew lost their lives carrying out these missions. The Lancaster Bomber achieved its finest hour with 617 Squadron, The Dam Busters.

In May 1943, Royal Air Force No. 617 Squadron carried out Operation Chastise, later called The Dam Busters. The Lancaster’s versality meant it could carry a bouncing bomb developed by Barnes Wallis – and German dams were targeted.

The Möhne and Edersee dams were breached causing catastrophic flooding of the Ruhr valley and villages in the Eder valley. The devastating attack also took out two hydroelectric power stations. In addition, factories and mines were destroyed and an estimated 1,600 civilians, about 600 Germans and 1,000 mainly Soviet forced labourers, died. The story was retold in 1955 film The Dam Busters.

The Avro Lancaster, manufactured by Avro, was designed by Roy Chadwick and powered by four Rolls-Royce Merlins and in one version, Bristol Hercules engines. It first saw service with RAF Bomber Command in 1942. It became the principal heavy bomber used by the RAF, the RCAF and squadrons from other Commonwealth and European countries serving within the RAF, overshadowing the Halifax and Stirling.

The ‘Lanc’, as it was known, became one of the most heavily used night bombers during the Second World War, delivering 608,612 long tons of bombs in 156,000 sorties.

Mr Stevenson said: “This find will interest militaria and aviation enthusiasts all over the world. It is a formidable piece of wartime history. I expect this to fly at auction, and potentially smash its guide price.”