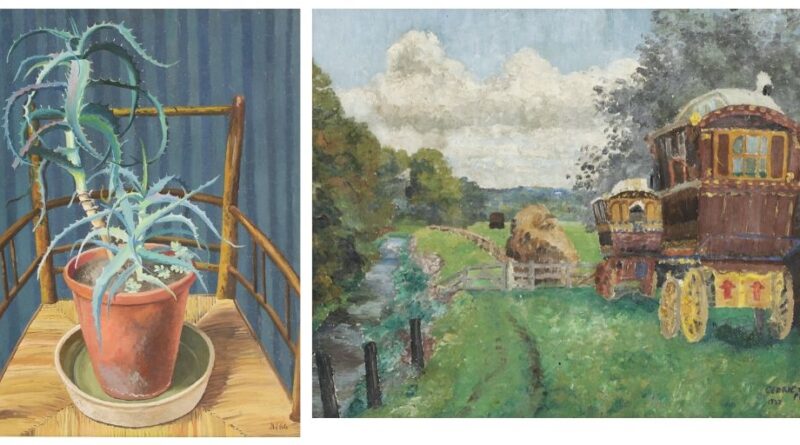 The sale included a broad selection of British and Continental paintings and sculptures, with bidding from the US to Sri Lanka. As always with Sworders, there was a particularly strong selection of East Anglian art. 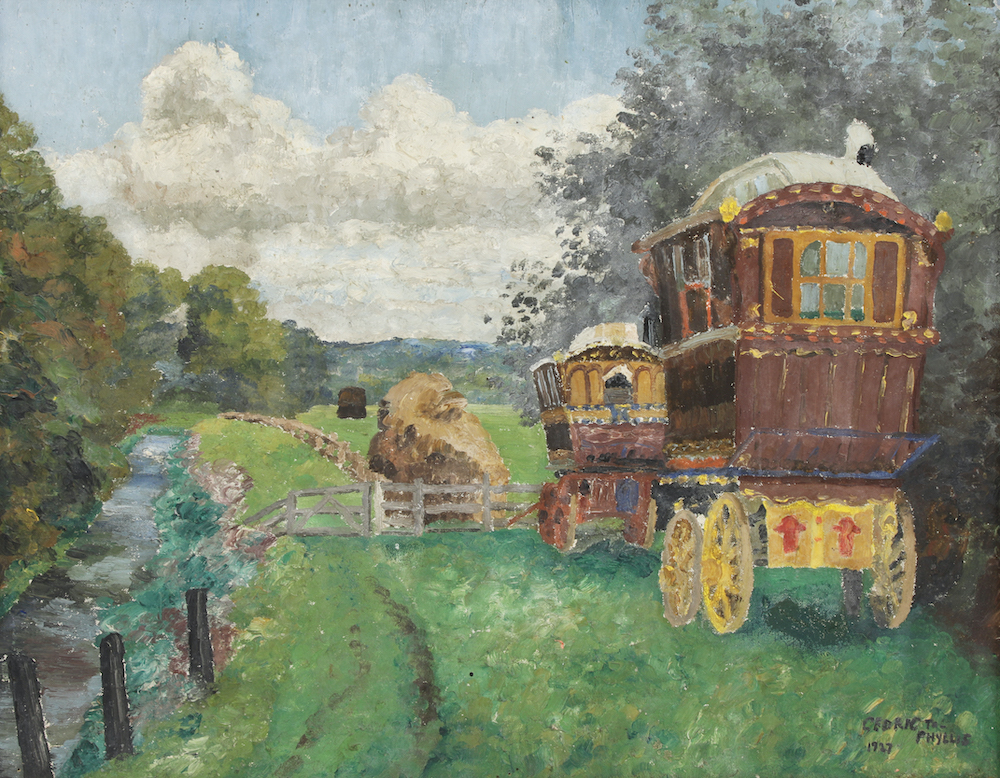 In the wake of an auction record of £204,160 bid in Stansted Mountfitchet last year for Foxglove by Cedric Morris, another fine painting by the Suffolk artist-plantsman came for sale from an Oxfordshire vendor. Gypsy Queen Caravans in a Sussex Meadow, which sold to a private buyer at £23,400, was dated and dedicated “to Phyllis from Cedric 1927”. The vendor’s mother Phyllis Pitcairn Gage-Brown was part of Morris’s circle and it had been the norm for the group to ‘play’ at camping together in the grounds of Socknersh Manor, East Sussex. Two years later Morris would move from London to begin life in rural Suffolk where he would establish the East Anglian School of Painting and Drawing at Benton End, near Hadleigh.
Four pen and ink drawings by Edward Bawden came for sale from the estate of Cambridge resident Lady Elizabeth Cavendish. Two showing East Anglian village life were created for The English Scene, a diary and notebook published by textiles firm Morton Sundour Fabrics. At the height of the vogue for the group of artists living in and around Great Bardfield, Bawden was invited to illustrate the diary on several occasions in the early to mid-1950s.
Morris Dancing at Thaxted and Village Fete, from the edition published in 1955, carried expectations of £1500-2000 but sold at £2,860 and £3,640. From the same source were two similar London scenes titled The Painters’ River, Chelsea Embankment and a depiction of the great Victorian glasshouse at Kew titled Greenhouse Management. These did even better selling at £6,110 and £4,160 respectively.
John Aldridge was a neighbour of Bawden in Great Bardfield and the two artists collaborated on wallpaper designs.  His focus on the landscapes of East Anglia have made him a firm favourite with local collectors of East Anglian art and in recent years four-figure sums have become the norm for finished oils. Here an oil on board titled Condemned Cottages by the River Pant realised £4,290. It was signed and dated October 1939 – two years before Aldridge left behind wallpaper for the British Intelligence Corp and a wartime role interpreting aerial photographs.
A group of works in the sale (28 lots in total) came for sale from the estate of Tony Venison, Country Life magazine’s long-serving gardens editor and good friend of Cedric Morris. These ranged from a Victorian mahogany hall chair painted with a panel of flowers (£312) to the Morris oil Sengalese Boy painted during a holiday in Tizi-Ouzou, Algeria in 1921 (£10,660). 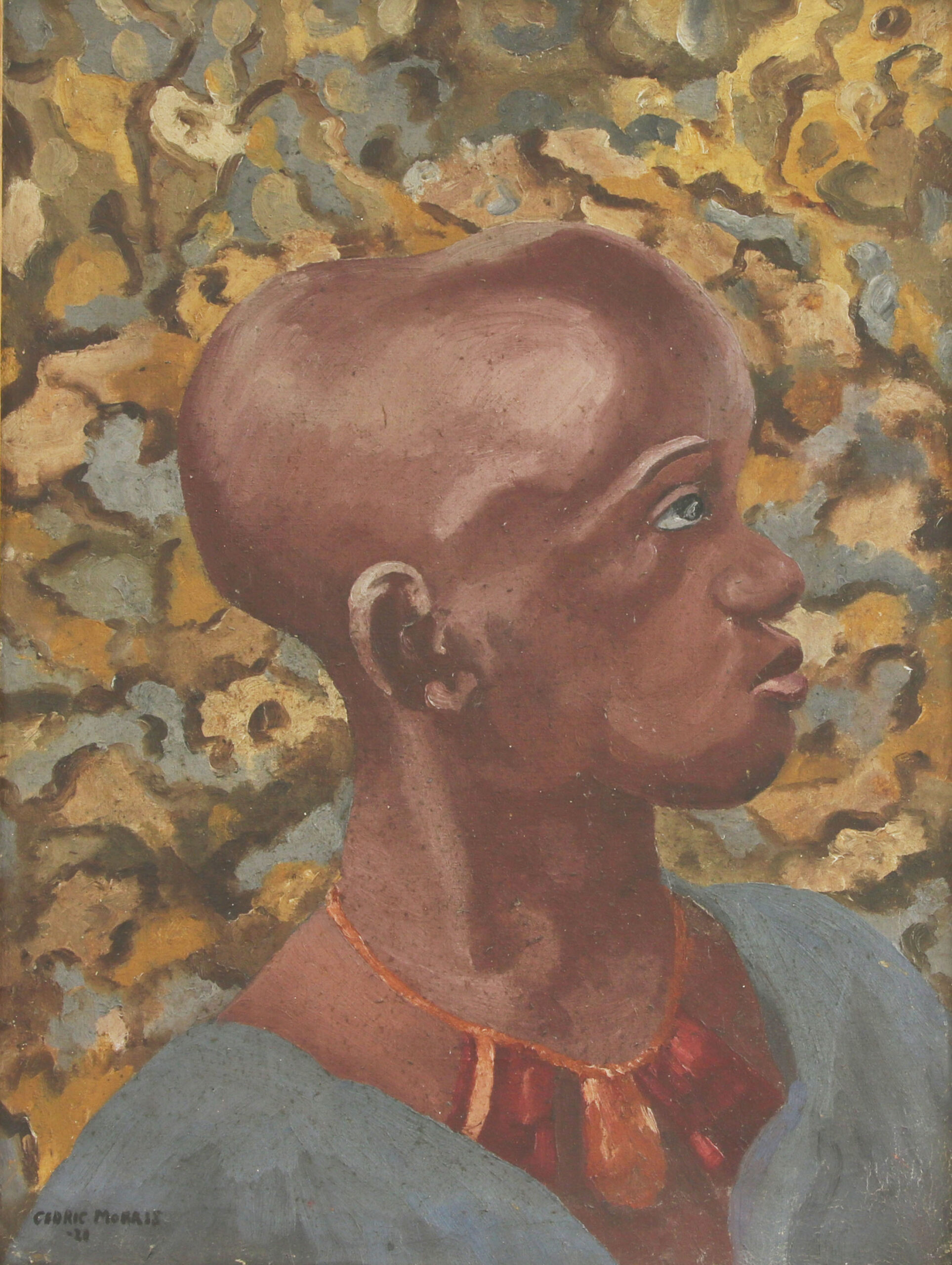 A remarkable £2,730 was paid for Venison’s version of the 1929 wood engraving The Dog Show by Tirzah Garwood (1908-1951), a Great Bardfield artist best known as the wife of Eric Ravilious.
The £5,460 bid for Joan Warburton’s oil Succulent on a Chair was also thought to be a record for the Suffolk artist who studied at the East Anglian School of Painting and Drawing. This picture, signed and dated 1966, provided a case of ‘two for the price of one’. To the reverse of the canvas was an earlier still life of a pestle and mortar, a dish of eggs and a wine bottle. 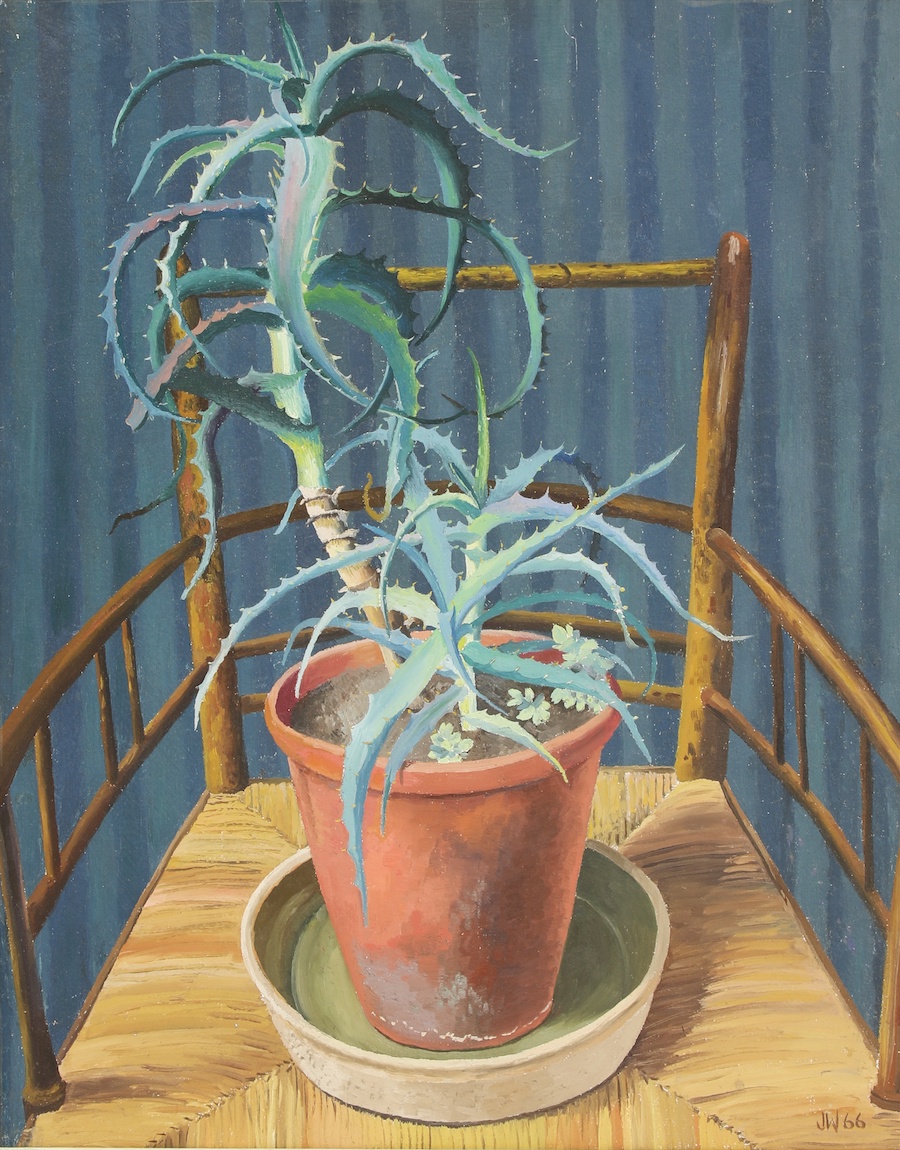 Venison’s collection embraced artists from beyond his native East Anglia. Particularly popular were a small 1994 Mary Fedden watercolour The Cut Melon sold to a London collector at £4,680 and John Craxton’s conté crayon on brown paper Landscape, Lanzarote from 1975, sold to a buyer in Salisbury for £7800.
Among the best-performing lots in the sale was Summer Bunch, a still life of garden flowers by Newlyn School artist Gertrude Harvey (1879-1966). This picture, one of many Harvey showed at the Royal Academy, came from a vendor in Essex with hopes of £150-350 but sold to a UK buyer bidding over the telephone at £10,660.
Emvin Cremona (1919-87) is regarded as one of the best Maltese artists of the 20th century and the designer of most of the island’s stamps from 1957 to the 1980s. However, his work rarely appears for sale in the UK. Two signed and dated 1974 works were included in the sale including the mixed media painting of the harbour at Valetta titled Four Knights, A City Beyond. The price of £7,930 (estimate £3000-5000) is thought to be an auction record for the artist.
Sold for £6,110 to a London private buyer was a pottery sculpture by artist Grayson Perry (b.1960)– one of a dozen metallic-glazed Alien Babies created by the Turner prize-winning ceramicist in response to a 2018 Channel 4 documentary Rites of Passage. In the episode titled Birth he visited the neonatal ward at Chelmsford’s Broomfield Hospital and, inspired by the experience, produced these models to celebrate the NHS, medical technology and the work of nurses. He gave one to every member of the team at Broomfield. This example, stamped number 9, was being sold by one of the couples that featured on the show.
Leading the sale at £29,900 was Ken Howard’s Sarah Reflecting, a large oil of his favourite model draped in blue as she looks in a mirror. This was signed and dated 2000 and carried an exhibition label to the reverse for the Royal Academy Summer Exhibition of that year.
Specialist Jane Oakley was delighted with the results, and said: “Overall, it was a hugely encouraging day for the market, showing that despite the uncertainties, people still want to buy art. I think you might call it the ‘lockdown effect’. Having a captive audience of buyers cooped up at home worked in our favour. Prices were off the register for many pieces.
“There were some really strong prices across the board” said Jane Oakley. “The lack of viewing opportunities in lockdown certainly didn’t hamper interest or prevent clients from digging deep. The East Anglian works in particular performed with gusto. These homegrown artists are still largely affordable – but for how much longer?”
Share this...