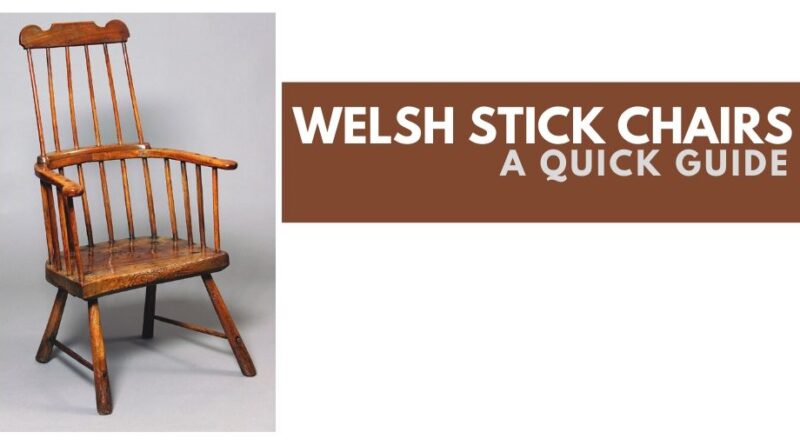 Antique dealer Tim Bowen has had a lifelong love of Welsh stick chairs, admiring them for their sculptural beauty and aesthetic quality, which makes them a popular addition in many modern interiors.

My interest in stick chairs began as a teenager, helping out at a local auction room. I came across what I thought was a broken chair with a few sticks held on with string. I was amazed when the auction began to see the level of interest in it and the price the chair achieved.

I vowed to learn more. I went on to work at an auction house and then for a specialist antique dealer of country furniture for 15 years during which time I deepened my knowledge of vernacular furniture and folk art, including stick chairs, the popularity of which has never been higher.

While these chairs are now regarded as important historical and cultural items and highly prized for their sculptural and aesthetic qualities, we should remember they were made simply to sit on.

It is useful to think about this when we get too carried away with analysing them. Sitting in a Welsh stick chair today is a tangible link across the generations to the hands that have grasped the arms. It takes us right back to the maker and his modest intention, to make a comfortable chair for his customer.

Antique dealers, historians and collectors need names for things. The term ‘stick chair’ refers to the apparent simplicity of their construction and appearance. We don’t know what they would have been called originally.

They are sometimes known today by other names, such as the ‘Welsh Windsor’, primitive chairs or hedge chairs. The term ‘Welsh Windsor’ might suggest they are copies of the English Windsor chair, while the term ‘primitive’ may be associated with poor skill, or an item of an inferior quality or an earlier evolution.

We believe these terms fail fully to take into account and appreciate the long tradition of building and making from wood, seen in Wales for hundreds of years. They are not copies of some finer, sophisticated type of chair, but were made by local craftsmen to meet a particular local demand.

There are many types of stick chair which were made throughout the British Isles. The term Welsh stick chair helps to differentiate them from their Irish, Manx, Scottish and English cousins.

The thing that all these chairs have in common is their method of construction; all the uprights and legs are fixed into the seat and were more often than not held in place with a wedge. This ancient method of construction is known variously as staked, stick or wedged. There is not one particular factor which makes a good stick chair; form, patination and colour all combine to help assess a chair as being either great, or outstanding.

Without factual records to draw upon, such as invoice books, notebooks, diaries, questions as to who made these chairs will remain unanswered. Some of the chairs show knowledge of the techniques used by conventional furniture makers and turners.

The wood-working tradition was well established in Wales and included makers of boats, carts, wheelwrights, spinning wheels and, housebuilders – all craftsmen who worked in wood. All of them would have had the necessary knowledge and skill to make a stick chair with every community served by a blacksmith, carpenter and various other craftsmen.

There is no template for the Welsh stick chair and there are no two exact same examples. They were often robust, built for strength and longevity and were made to sit on damp flagstone or earth floors.

It is likely they were moved about from the light and warmth of the hearth, to outdoors, and near the windows for natural light in an otherwise probably dark cottage interior.

While these chairs may initially appear to be of simple construction, closer analysis shows they were often made by skilled craftsmen with a strong understanding of the properties of wood, of how it grew and how best to use it. Surviving examples are predominantly found to have been made from ash, a hardwood which grows prolifically throughout Wales, and regularly found in the uprights, legs and seats of the chairs.

Elm was sometimes used for the seat because of its fibrous grain which made it strong and less likely to split or crack than oak. Although oak was used prolifically in the Welsh furniture-making tradition, it is only occasionally found in the stick chair. Sycamore – which was used for turned bowls, cawl spoons and other items made for the dairy and kitchen – was sometimes used in chair-making; mostly for arms, but is rarely found to have been used for the legs or uprights in surviving examples.

Other woods, such as fruitwoods, and even imported hardwoods were occasionally used. Pine or deal, being a softwood, would have been less strong and more susceptible to worm and rot, which may explain why it is not often found in existing examples.

Many of the chairs would originally have been painted to preserve them and perhaps also to decorate. Some examples which remain today have many layers of paint, varnish and subsequent finishes which make them more desirable to the collector.

Providing an exact date and origin to these chairs is notoriously difficult though it is not, in our opinion, the most important consideration. While methods of construction remained unchanged for generations, it should not be assumed that the makers and owners were unaware of changing fashion and design, but that perhaps it was not relevant to the requirements of maker and owner.

Larger towns such as Haverfordwest and Carmarthen had well-established furniture makers, where contemporary and fashionable furniture could be acquired. Whereas the furniture of the cabinetmakers can be compared to a recognised lineage, there are few records for vernacular furniture.

In Wales, there is very little recorded provenance of stick chairs by their makers or owners.

However, in America and other parts of the British Isles, there is both pictorial and written evidence of similarly constructed chairs. An oak stool recovered from the Tudor war ship, Mary Rose, which sank in 1545, was made in exactly the same way as stick furniture found throughout Wales and the British Isles, which date from centuries later.

The method of fixing two pieces of wood with a split and wedge is timeless.

It is important to consider chairs which may have been stripped at some point and may appear to have less age than a chair which retains its original and subsequent finish.

While it is undoubtably interesting to know the history and provenance of the chairs, it is unwise to be drawn into being too definitive on their regional attribution. For example, Abercych in the heart of the Cych valley, a centre of woodturning for centuries, is situated in north Pembrokeshire but is also within half a mile of Carmarthenshire and Cardiganshire. Would the original owners have defined the chairs as we do today?

This elegant stick chair is of a style which has since become known to collectors and dealers as a ‘lobster pot’ design.

The lobster-pot style chair is found in other parts of the UK and often found in the West Country. Given the close geography and established trade, there should be no surprise that there are such similarities between West Country and Welsh furniture.

Made from ash and elm, the back sticks are held under tension by a deep and generous crest rail.

The honey colour perhaps indicates that it has been cleaned at some point but there are still traces of a darker, original finish.

Tim Bowen and his wife Betsan started an antiques business, based in Carmarthen, in 2003, specialising in Welsh country antiques. The couple’s book The Welsh Stick Chair – A Visual Record from which this extract is taken is published by Pethe Press priced £20. It can bought from www.timbowenantiques.co.uk