An 18th-century blue and white charger that commemorated the marriage of Jonathan and Betty Bastow in 1780 could fetch up to £1,000 when it sells in a Kent auction next month.

The rare charger features a charming decoration in the form of shoulder-length portraits of the bride and groom. The bride is elegantly dressed with coiffed hair, while the groom is the wearing the tricorn hat of a prosperous gentleman.

The auctioneers, The Canterbury Auction Galleries, said the names of the couple’s seven children (six daughters and one son) are recorded on a hand-written label pasted on the back by one of Betty’s granddaughters.

However, that is all that is known about the couple and their family.

The charger is an example of 18th-century Yorkshire creamware, possibly from the Hunslet, South Leeds, factory of Humble, Hartley, Greens & Co., who were so successful they rivalled Wedgwood. The item is one of a number of pieces of early English pottery and is expected to sell for £700-1,000 in the two-day sale on August 1-2.

Elsewhere in the sale, a two-strand necklace of rarely seen lasque-cut diamonds, the backs of the 22 carat settings enamelled in a floral design in royal blue and green, and a pair of similar oval earrings will sell as one lot with an estimate of £10,000-15,000. 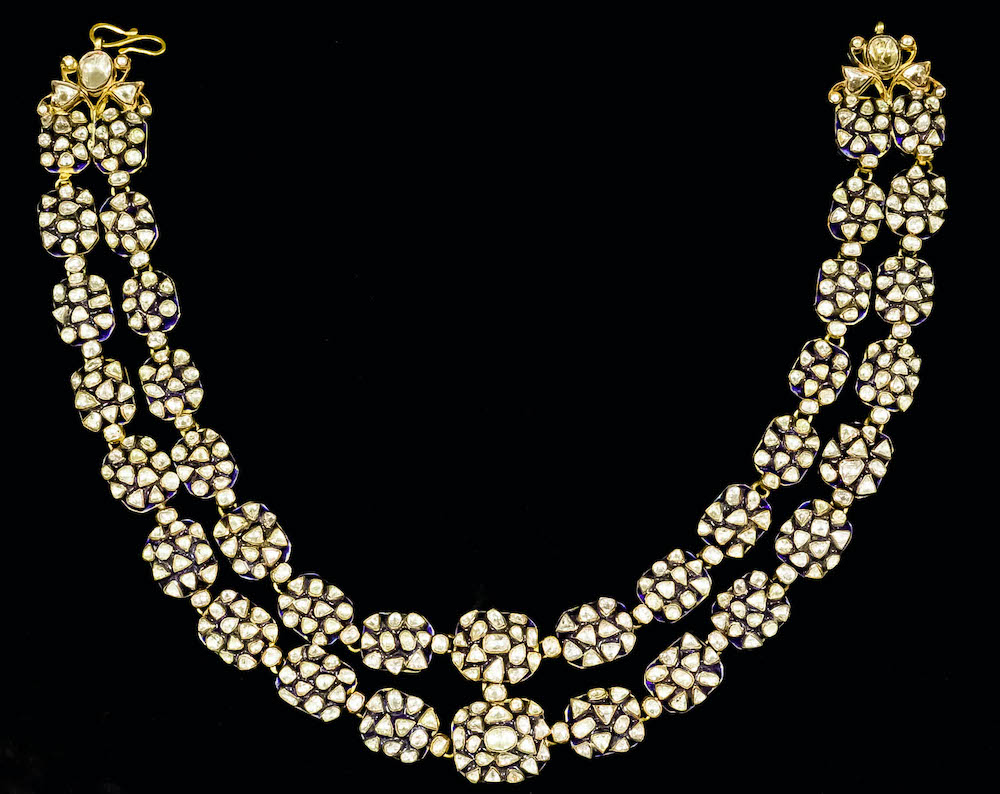 Consigned by the executors of a local deceased estate among an eclectic mix of mainly Victorian marine and river landscape scenes, furniture and a bronzes are two contrasting lots: a vibrant and colourful oil on board of apple blossom in an orchard by Olga Wisinger-Florian (1844-1926) a well know Austrian impressionist painter, 16ins x 26ins, which is estimated at £6,000-8,000, and a contemporary bronze by Mark Richard Hall (b. 1970) titled appropriately ‘FallenFruit II’.

Wisinger-Florian was an Austrian impressionist painter, mainly of landscapes and flower still lifes. She originally trained as a concert pianist but switched to painting in the mid-1870s. She showed regularly at Vienna Secession exhibitions, finding a worldwide audience after her work was shown in Paris and at the Chicago International Exhibition of 1893.

Mark Hall is based in Dorset and creates often humorous, often oversize objects from nature. His Fallen Fruit has been done in monumental versions for the garden and in the current example, dated 2005, measuring 8.5ins overall x 9.25ins high. It is estimated at £150-200.

The sale’s militaria section is dominated by a single-owner collection of Kings Royal Rifle Corps memorabilia, but also of note among bravery medals and decorations is a Distinguished Flying Medal group of three to Flight Sgt. Arthur Sykes, 35 Squadron RAF, which is estimated at £1,500-2,500.

A citation in the London Gazette of October 13, 1942 reads: “F/Sgt. Sykes has proved himself to be a most skillful and reliable navigator. He has participated in attacks on a wide range of enemy targets, including Hamburg, Cologne, Stettin, Berlin, two daylight raids on enemy battleship at Brest, and two low level attacks on the German Naval base as Trondheim.”

Sykes was part of the crew of a Halifax R9364 on a raid on  December 30, 1941 on an operational flight to attack the German battleships at Brest that took off from the base at Linton on Ouse at around 11:00 hours. The aircraft was hit and damaged by flak while over the target area and damaged to an engine and the fuse light was sustained. The crew managed to make safe return to Linton on Ouse and landed safely at 17:09 hours.

The medal group comprises the DFM, the 1939-1945 Star and War Medals and is accompanied by black and white photograph showing Sykes and six other members of the crew standing in front of aircraft; his dog tag and paperwork including his ticket for his investiture at Buckingham Palace dated November 10, 1942.