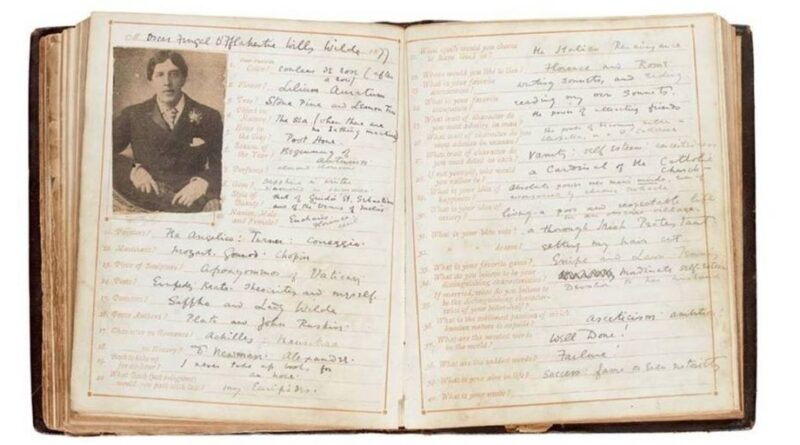 An insightful questionnaire filled in by the playwright Oscar Wilde in 1877, on the cusp of finding fame, has sold for £47,880 in Sotheby’s sale from the collection of acclaimed actor Steven Berkoff.

Wilde was in his early twenties when he contributed to the album of ‘Mental Photographs’ in 1877. He was still at Oxford and yet to publish a book, but had already established a keen following. Signed grandiosely with his full name, ‘Oscar Fingal O’Flahertie Wills Wilde’, here he answers thirty-nine personal questions recording a myriad of different preferences from his favourite colour, flower, season, tree and perfume, to gems, first names, painters, musicians, poets and more. 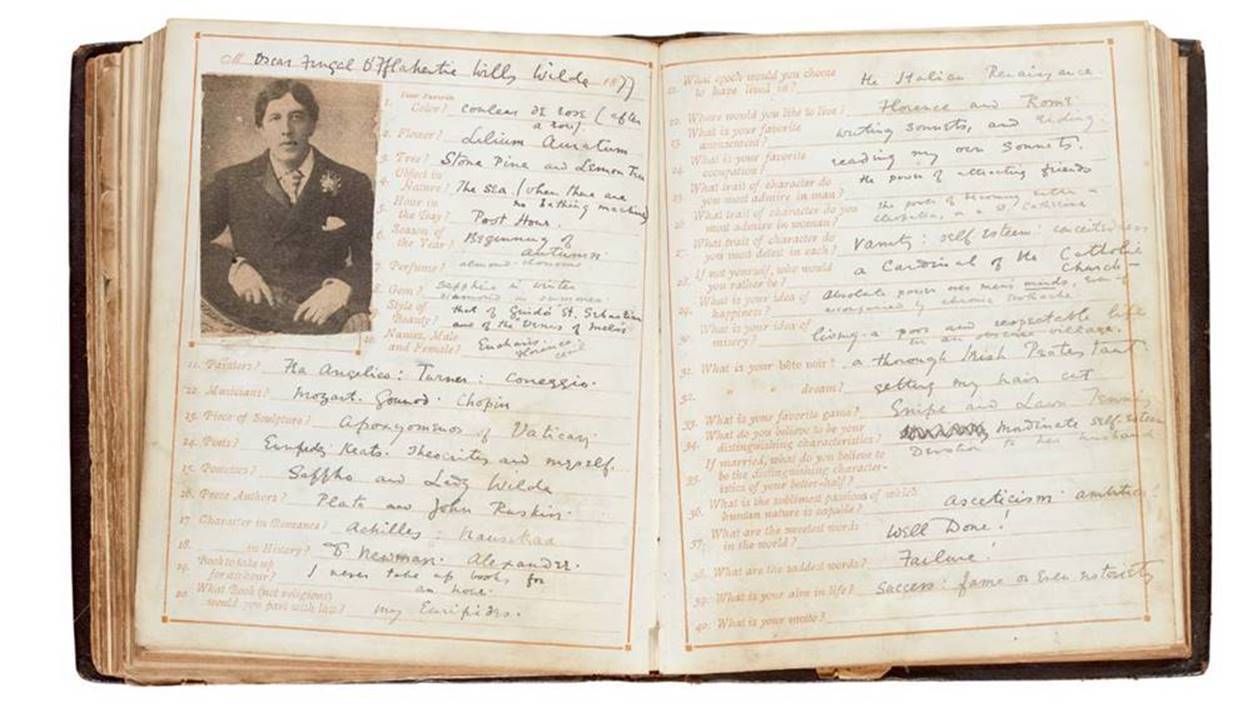 What is your favourite object in nature? The sea (when there are no bathing machines)

What is your favourite amusement? Writing sonnets and reading

What is your favourite occupation? Reading my own sonnets

If not yourself, who would you rather be? A Cardinal of the Catholic Church

What trait of character do you most admire in man? The power of attracting friends

What trait of character do you most admire in woman? The power of becoming either a cleopatra or a St Catherine

What trait of character do you most detest in each? Vanity: self-esteem: conceitedness

What are the sweetest words in the world? Well done!

What are the saddest words? Failure

This album including the Oscar Wilde questionnaire came to sale from the collection of actor and director Steven Berkoff (b.1937), famed for his villainous on-screen roles including General Orlov in the James Bond classic, Octopussy (1983). Berkoff began collecting Oscar Wilde material around the time he directed Wilde’s great tragedy, Salome, in the late 1980s. The show opened to acclaim at The Gate Theatre, Dublin, on the sixtieth anniversary of Salome’s first controversial public viewing there in 1928, and went on to sell out at London’s National Theatre, before travelling to Japan, Germany and beyond.

This provenance perfectly mirrors another former owner of the album – Adderley Millar Howard (c. 1863-1827), who was also an actor, a touring theatrical impresario and, later, a theatrical manager. He is believed to be an early, or perhaps even the first owner of this album.

Sotheby’s Dr Philip Errington, said: “Wilde’s responses sparkle with the author’s characteristic ebullience and many are perfect Wildean epigrams. Knowing what we do about Wilde’s sharp wit and lofty world-view, his replies are exactly what one would expect to see from this bold, intellectual, young writer, still in his early twenties but already experiencing his first taste of fame. This questionnaire – likely filled in for an admiring fan – freezes the young Oscar in a moment in time, but also provides a chilling prophecy of what was to come. His answer to the final question ‘What is your aim in life?’ reads ‘fame, or even notoriety’.”