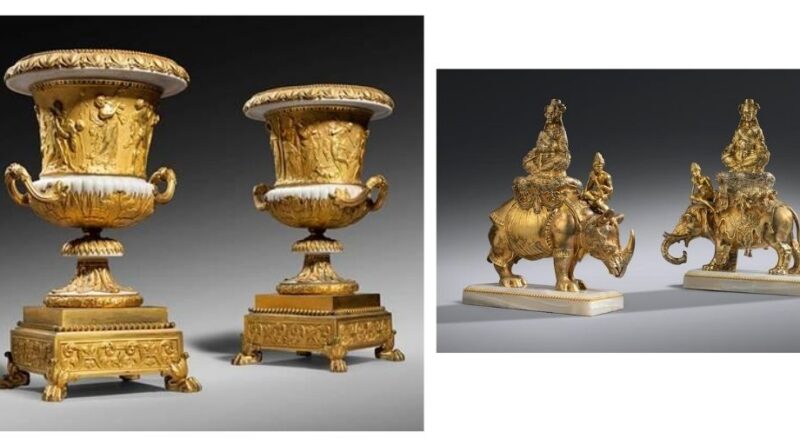 A pair of Rothschild vases from Exbury House in Hampshire has sold for £95,000 at Salisbury auctioneers Woolley & Wallis.

Together with a pair of 19th-century continental silver-gilt figures of a rhinoceros and elephant that made £78,000, the two lots sold for almost twice what the entire Rothschild contents of the sale were expected to fetch.

At the heart of the recent Furniture, Works of Art & Clocks auction were 17 lots from a much larger consignment from the Hampshire seat of the Rothschild family, which are being dispersed across a series of sales this summer and autumn at Woolley & Wallis.

The pair of Louis XVI ormolu and marble models of the Borghese vase, a celebrated krater sculpted in 1st century BC Athens that now resides in the Louvre, had been expected to sell for £20,000 to £30,000, while the rhino and elephant had an estimate together of £10,000 to £15,000.

While some of the other Rothschild lots went around or above estimate, others also sold much more strongly, including a Renaissance-style lapis lazuli tazza or serving bowl, which made £2800 against hopes of just £600-800, and an Italian carved rock crystal flask, also in the Renaissance style, with an estimate of £600-800 that went for £8,000.

It wasn’t just the Rothschild lots that went well. In sale that saw 90 per cent of the more than 600 items on offer change hands. The buyers nearly missed out on a rare French torpedo industrial timepiece with automaton estimated at £8,000-12,000 when their phone signal failed, but they managed to reconnect via FaceTime to place the winning bid of £30,000.

With a number of outstanding prices for Rothschild lots already achieved in earlier sales, Woolley & Wallis will next present pictures from Exbury House in their September 8 Old Masters, British & European Paintings sale.

Woolley & Wallis’s former chairman Paul Viney, who remains an active part of the firm as a director, has been overseeing negotiations for the Exbury House consignment for the past three years. He commented, “It was a privilege to be able to sell these items on behalf of the Trustees of Exbury House. Their quality, combined with the Rothschild provenance, always meant that they were likely to do well but in almost every case they exceeded our expectations. In addition they introduced a number of new clients to us including many from overseas who came to Salisbury specifically to view the collection.”

Specialist Mark Yuan-Richards added: “The sale saw bidders from Russia, Hong Kong, Europe and America all drawn in by the Rothschild provenance and I think it’s fantastic that we, as the local auction house to Exbury House, have been able to reach this international audience and realise such great prices.”

He added, “For over 200 years the Rothschilds have been renowned as great collectors. The provenance of the lots we are selling, many of which have been through several generations of the family, can only enhance their interest.”