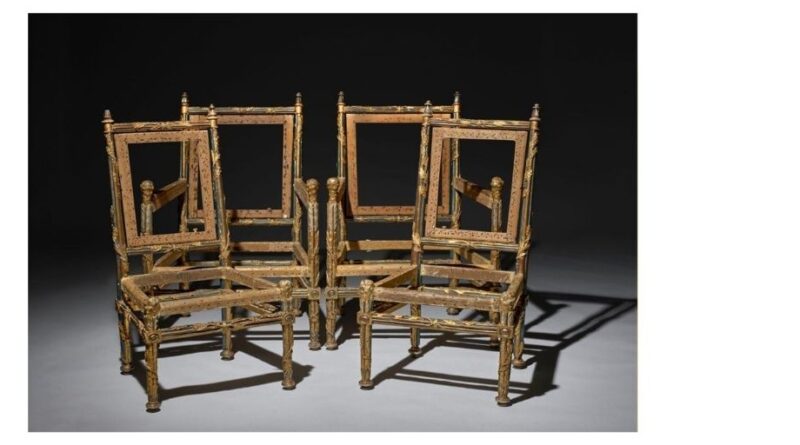 A set of four chairs, ordered by the Comte d’Artois in 1778 for his bedroom in Bagatelle, has sold for over £1 million in a recent Paris auction.

Artcurial’s Furniture & Works of Art department presented an exceptional suite of Louis XVI period royal furniture, which belonged to the Comte d’Artois, later to become King Charles X. After a long auction battle by telephone and in the room, the seats were sold for a total of £1.06 million.

These seats were ordered to furnish the famous bed chamber designed as a military tent. The auction house described them as a rare example of the great creative achievements and refinements of the neoclassicism movement in the end of the 1770s.

Decorated with lictors’ fasces entwined with laurel branches, they were executed by Georges Jacob (master in 1765) and the sculptor Jean-Baptiste Rode (master in 1766) as the archives clearly mention.

They illustrate the extravagant character and modern taste of the commanditaire, who had a close relationship with his stepsister, the queen Marie Antoinette emulating each other in their pursuit of pleasure and luxury. Bagatelle also called “la folie d’Artois” was then built in a few weeks as a mere challenge.

Presumably considered as cutting edge in 1778, the fancy seats belong to the Louis XVI aesthetics with a turquerie and delicate turn and announce the martial style of the years to come.