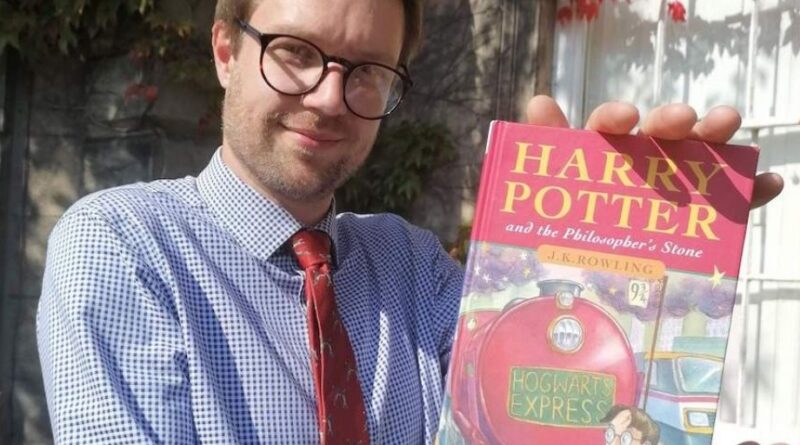 A dad was stunned to discover a book he brought to help his children learn English more than 20 years ago was a ‘seriously scarce’ hardback Harry Potter first edition worth thousands of pounds.

A newly-discovered copy of Harry Potter and the Philosopher’s Stone by J K Rowling, unearthed by Hansons Auctioneers books expert Jim Spencer, is set to be sold at Hansons’ Staffordshire Library Auction on October 13 with an estimate of £20,000 to £30,000. 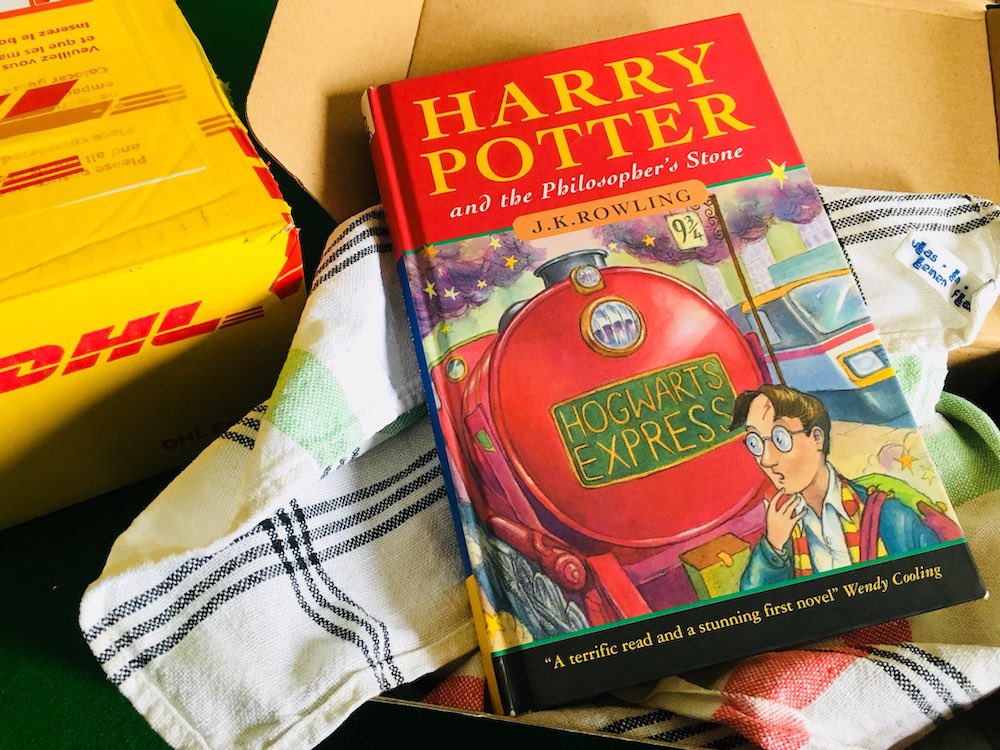 It had been sitting on a book shelf for around 21 years when the owner randomly decided to check it – but never in his wildest dreams did he expect it to be a first edition.

The retired British expat, who worked in aviation and lives in Luxembourg, said: “A couple of months ago when JKR bounced into the main news I decided to re-read the Potter series. I knew there had been a few first editions sold recently and Hansons was featured on the BBC website so, just to be safe, I checked the criteria.

“I did not think mine would be valuable as it was certainly not purchased when first published.  I was very surprised and shocked to see that it did in fact tick all the boxes, but still could not quite believe it until I checked with Jim Spencer.”

The book paved the way to Harry Potter mania across the world, six sequels and films. But such is its rarity, Jim was as shocked as the vendor when the book arrived, posted from Luxembourg wrapped in a tea towel, and proved to be the real thing.

Jim said: “True first issues are seriously scarce. Only 500 were printed, 300 of which were sent to schools and libraries. This is extra rare because it’s one of the remaining 200. And yet this is my fourth one in just over a year! It’s a cliched phrase, but they really are the holy grail for collectors. I’d dreamed of finding one for years before my first magical discovery in Staffordshire.

“This new copy deserves to do really well because it’s in astonishingly good condition. I would love to see it make £50,000. When the vendor contacted me, he said he’d come to me because I’m ‘the number one man in the world for Harry Potter’. What a wonderful compliment. Jeremy Vine said I look like Harry Potter on one of his TV shows – not sure if that’s such a good thing.” 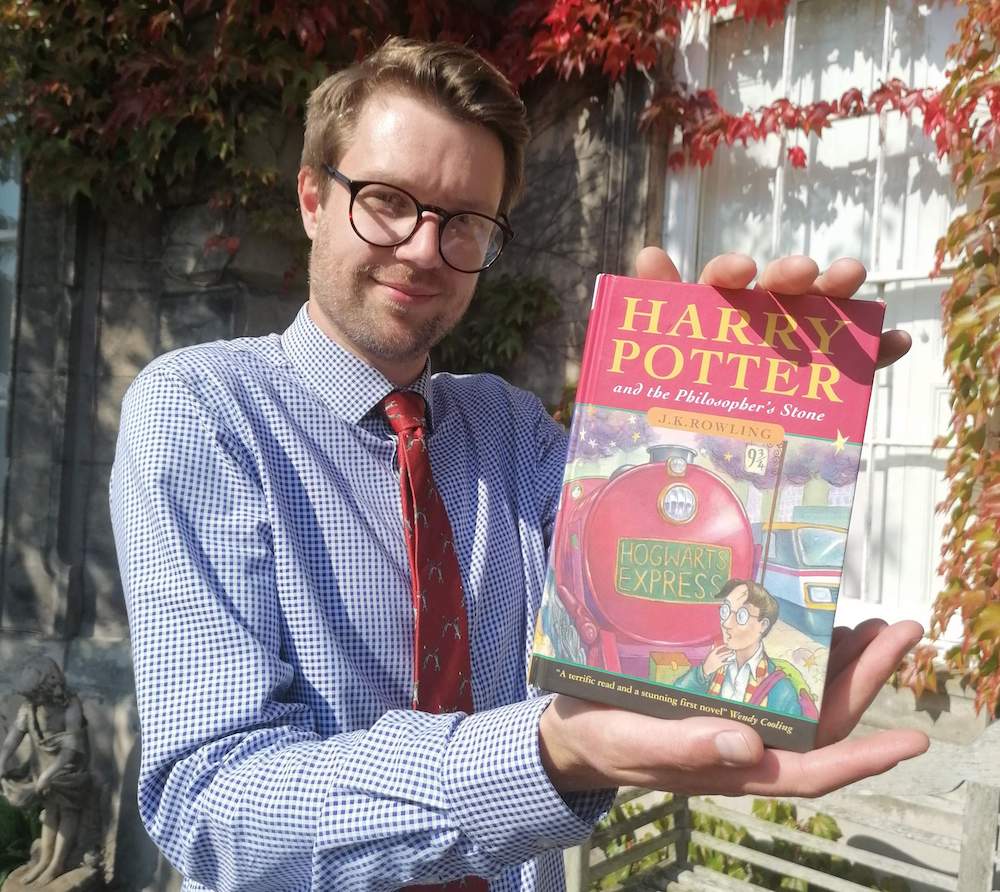 The vendor, who wishes to remain anonymous, said: “I bought the book for my children around 18 months after it was first published. If I remember correctly, I bought it by mail order from Barnes & Noble so I am guessing they had it in their warehouse for a while.

“I was prompted to buy it after reading a positive review in the Weekend FT.  I needed English books to read to my three children at bedtime as I was on a mission to teach them my native language from an early age.  Their mother is Luxembourgish and they were going to state schools here in Luxembourg, so I needed to make a bit of an effort.

“It’s just been sitting on a shelf ever since with the rest of the Harry Potter books, with no special care. It’s actually been read only once with the date recorded in the back of the book. One of the children stuck Harry Potter pictures in the book when the first film came out.

“I was a big fan of the Potter books when I first read them. There are a lot of ethical and human behaviour discussion points in the books and I had a lot of respect for JKR for producing such a polished and nuanced body of work. It gave me the opportunity to explain many interesting situations to my kids, and helped them all on the road to fluency in English.

“I sent it to Hansons in a tea towel as a little nod to the Hogwarts house-elves, especially Winky and Dobby.  I couldn’t manage to put the Hogwarts crest on it, but still – another stroke of ethically-loaded genius from JKR that deserves a tip of the hat.”

In Harry Potter and the Goblet of Fire, elves wore a uniform made out of a tea towel stamped with the Hogwarts crest. Originally used to dry china, they became the uniform of the Hogwarts’ elves.

The vendor added: “I have decided to sell now as I would like to pay off my daughter’s student loan for her, which will give her a good credit history and help her to apply for a mortgage.”

Jim added: “I was very moved by the vendor’s story. This book helped his daughter prepare for school, and now it’s going to help her buy a home.”

Hansons’ books expert also has a message of hope to anyone who thinks they may own a valuable Potter book: “You may not have a hardback first edition but first issue paperbacks are increasingly collectable, and I’ve handled quite a few of those – one sold for £6,500 in our last library sale.

“I still receive countless calls and emails every day from people who think they may have a first edition, mostly nothing of note, but I stay hungry and keep searching. I handle lots of signed works and other first editions from the Harry Potter series, but the first three novels are the ones that count.”