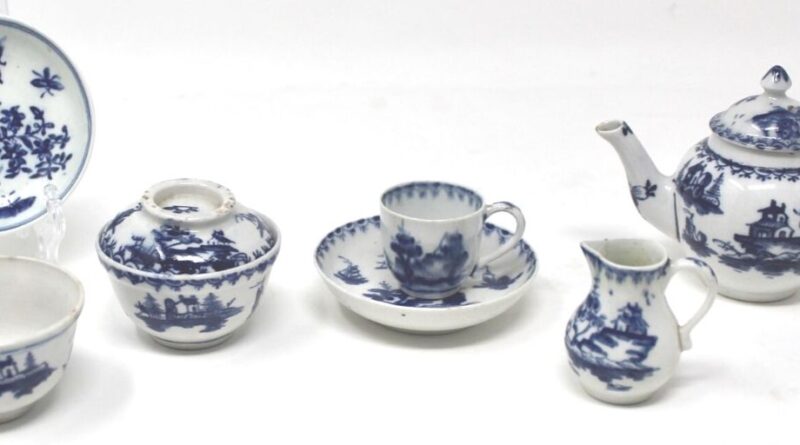 An annual and much-loved auction of Lowestoft porcelain, which has taken place for nearly 40 years in the east coast town in Suffolk, will this year be held at TW Gaze’s Diss Auction Rooms instead.

Famous as a port, Lowestoft’s unique place in the history of ceramic is the result of the exquisite pieces of locally-made 18th and early 19th-century wares.

The annual auction was originally established by local auctioneer and enthusiast, Russell Sprake. The bespoke auctions began in 1984 and have been held in different notable venues around the town over the decades. They became acknowledged as important specialist auctions and many record auction prices have been achieved.

Since her husband died, Zoë Sprake has maintained the tradition, and for the past five years has held the sales at the Hotel Victoria on the sea front, which provides the appropriate backdrop of the North Sea, visible through panoramic windows behind the lots on display; a very atmospheric addition to the drama of the saleroom.

For these occasions, Elizabeth Talbot of TW Gaze has been guest-auctioneer, and a good working-rapport has developed between the two. When it became obvious to Zoë that restrictions relating to Covid19 would make it impossible to hold the auction in the usual way this year, she approached Elizabeth with the idea of it being held at Diss Auction Rooms instead.

“I would have been terribly disappointed not to have been able to hold an auction this year,” said Zoë. “I have long-standing supporters of the auctions, both buyers and sellers, and it is an event in the calendar that we all look forward to. However, current challenges were beginning to make it look untenable. I have to be sensible and keep everyone safe. After re-emerging from lockdown, Diss Auction Rooms is managing several sales every week again now and has the infrastructure to host this year’s Lowestoft Porcelain Auction in a safe and professional way.”

Elizabeth added: “It is a privilege to be carrying the baton for Zoë this year. She has compiled a lovely sale, as always, with some very desirable pieces amongst the lots. We shall enjoy the day very much. However, the intention is for the auction to return to Lowestoft again next year. I am very passionate about the town and for these historical pieces to be traded in the place they were made seems only right and fitting.”

The event usually attracts buyers from London to Brussels and across the UK, as well as passionate enthusiasts from all over East Anglia, many of whom have generational links with Lowestoft.

The auction, will take place at Diss Auction Rooms in October 21.