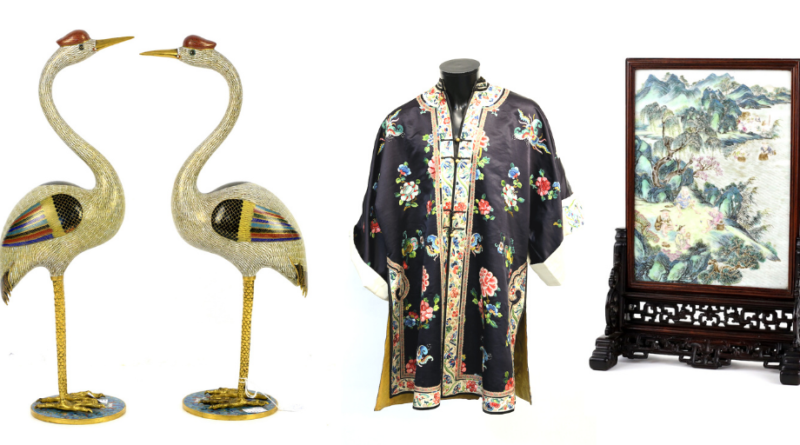 The collection reflects both Wilton’s long career in China, and his obvious appreciation for those objects more readily understood by Chinese taste. Wilton became a Sinologist, an expert in China, its language and people, of some repute. He witnessed the momentous changes of China’s transition from a long Imperial rule to the Provisional Government established by Sun Yat-sen in 1912.

James Hammond, Ewbank’s Asian art specialist, said: “He collected a variety of different genre from across a number of financial tiers. Doubtless those bidding online, for whom provenance is an important prerequisite, will cover the sale carefully. These are works of art collected during the last years of Imperial China, with estimates that will suit many different pockets.”

Wilton travelled widely throughout China, including as part of Younghusband’s expedition to Tibet in 1904 and toYunnan, a land-locked province in the south-west renowned for its spectacular and varied landscapes, which was not a regular destination for western travellers at the time.

He visited the region towards the end of the Great War, and subsequently presented this story in a paper to The Royal Geographical Society on 22nd January, 1917. As a traveller in Yunnan, Wilton is within a very select group of explorers and scientists that includes both the famous dinosaur hunter, Roy Chapman Andrews (1884-1960), and the botanist, Augustine Henry (1857-1930).

He ended a distinguished diplomatic career with a Knighthood from The Order of St. Michael and St. George.

Hammond, added: “It would be fascinating to know where in China Wilton collected each of his hardstones, textiles, ceramics and paintings. Some may well have been purchased during his travels in Yunnan, but in a mountainous region where even Yunnan’s famous black snub-nosed monkeys are forced to huddle together in order to keep warm, Wilton’s priorities were perhaps not entirely focussed on his art collection!”

Highlights from this intriguing collection, being sold by the direct family of Wilton, include a wood-mounted famille-rose table screen, from the Qing Dynasty period, which stands 30cm tall and 20cm wide. It is decorated with painted figures in a mountainous river landscape, and carries a pre-sale guide price of between £500 and £800. 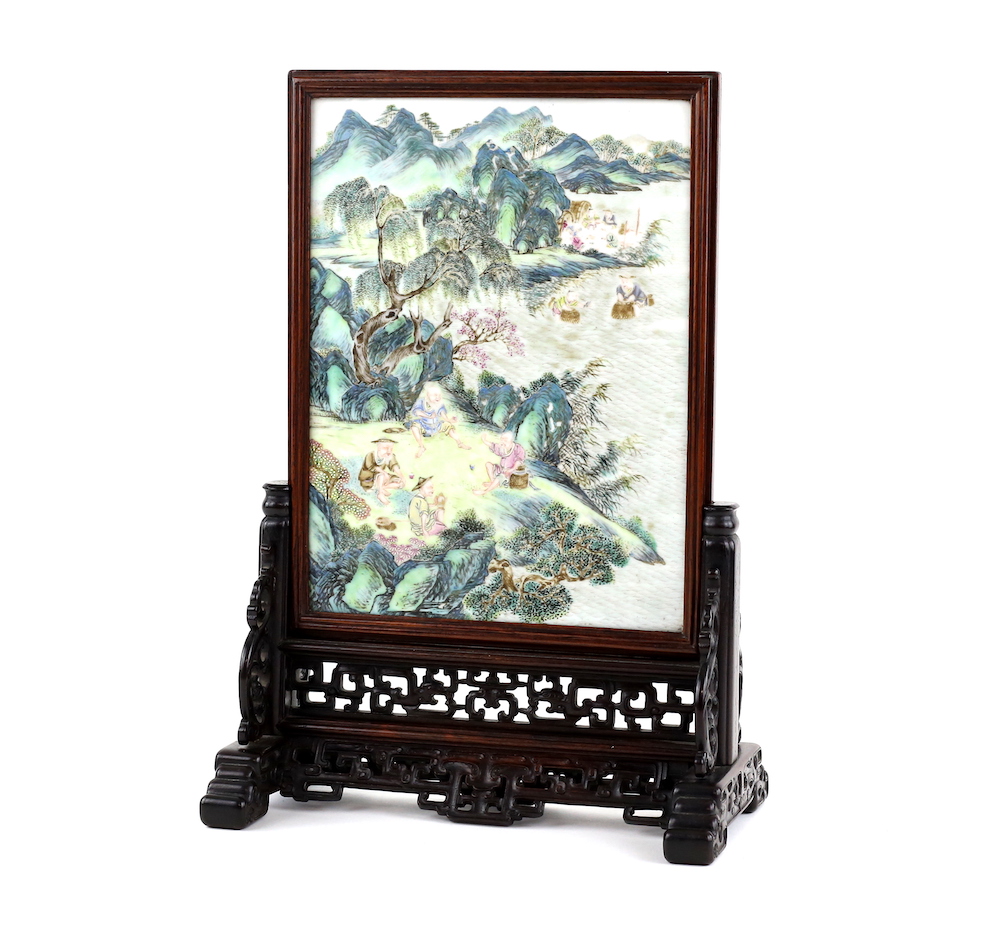 A pair of Chinese gilded-metal alloy incense burners has been valued between £400 and £600. Each of the burners is modelled as a Buddhistic lion with detachable head and each stands 18 cm high.

An elegant Chinese textile jacket with imperial yellow lining and white ground cuffs has a guide price of between £300 and £500; and a metal alloy object, of hexagonal form, which is possibly an incense-stick container for the scholar’s table, has an estimate of between £200 and £300.

A group of delightful collectibles is on sale with a guide price of between £150 and £250. It includes two small satsuma vases from the Meiji period, each nine cm high; an iridescent shell inlaid box; a rectangular red lacquer tray; and a circular red lacquer box, decorated with scholars in a mountainous landscape.

Alongside the Wilton collection are a number of stand-out lots in the Asian Art sale, including an impressive pair of Qing Dynasty period Chinese cloisonné enamel cranes, which is sure to elicit huge interest from buyers.

The pair of standing red-capped cranes has an estimate of between £10,000 and £15,000. Each has gilded beaks, legs and feet, and folded feathers in a variety of colours. Both birds are of a turquoise-ground circular cloisonné base, andstand 45 cm high. They have been consigned for sale from a private UK collection which was inherited from the vendor’s grandfather. 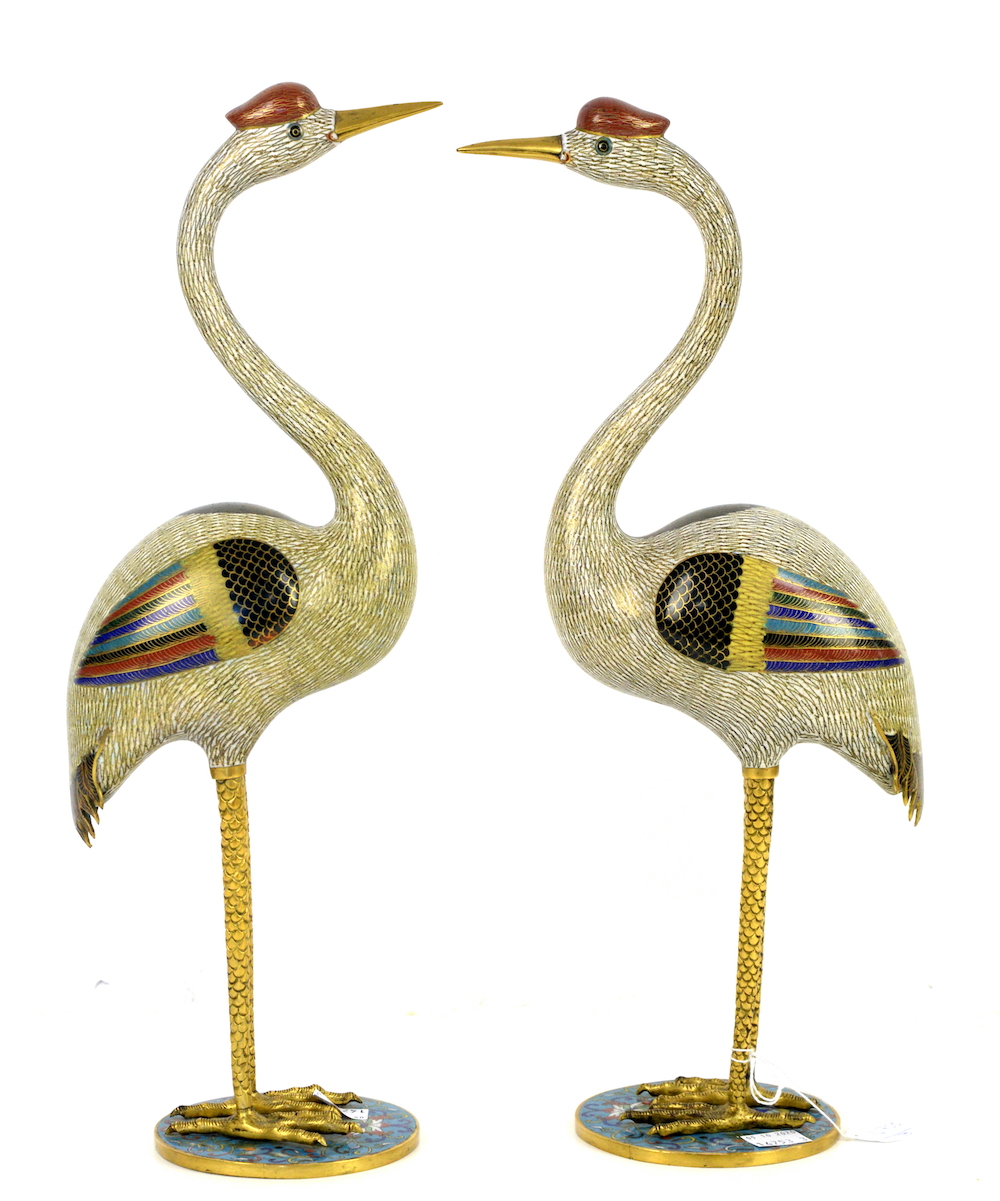