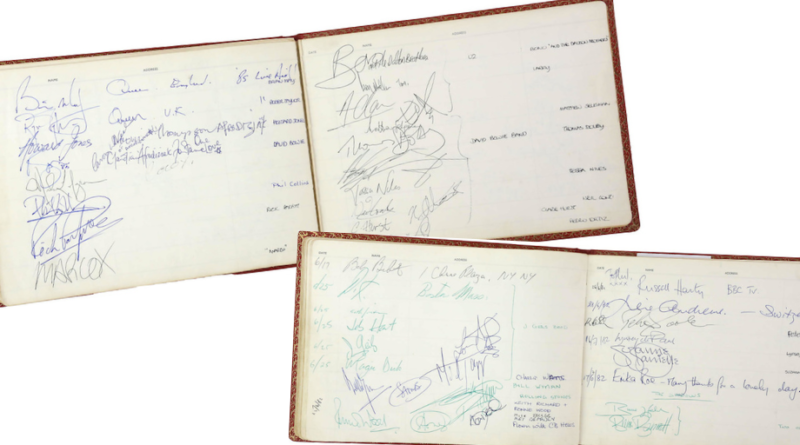 Stars from Freddie Mercury and Prince Charles to David Bowie, U2’s Bono and Margaret Thatcher are all included in an autograph album from Battersea Heliport that is set to sell in a Surrey auction house this month.

Over 700 celebrity names are included in the rare Battersea Heliport Visitors album from the 1980s – ranging from royals, sports stars and singers, to actors and politicians – that has been consigned to Ewbank’s Auctions by David Ward, manager of the heliport at the time.

“It’s an extraordinary collection – way beyond what you would find in even the most sought-after autograph albums,” said Ewbank’s specialist, Alastair McCrea. “That’s because autograph hunters have to seek out their heroes and get them to sign, but in this case the rich and famous simply passed by and added their names to its pages. It’s not often that you would find signatures for the whole of Queen, David Bowie and Bono on the same two facing pages.”

Mr Ward remembers Prince Charles having to stop off at the heliport when his RAF Queen’s flight helicopter diverted to Battersea with a fault.

“While they sent off for a replacement flight, I offered him the VIP room, but he preferred to come and sit in the control tower and chat with me instead. Another pilot came into the room by chance and was stunned to see him sitting there.”

“One of the interesting and amusing additions are the contemporaneous notes identifying the signatures,” said Alastair McCrea. “For instance, the signature from Erika Roe, who visited in June 1982, is annotated ‘Topless lady at Twickenham Rugby’.”

On another page, just below the signature of Lester Piggott, and above that for Sir Keith Joseph appears another for a Chrissie Surridge, annotated “Who”, while at the bottom of the same page, the modest Graham Osborn describes himself as “Just a Pilot”.

The album also offers some interesting juxtapositions: Norman Fowler, then the Secretary of State of Social Security, in 1984, is followed by Status Quo bassist Alan Lancaster, while actor Tom Conti appears just before Queen Margrethe of Denmark.

On another page, actor David Soul squeezes in between Falkland Islands governor Rex Hunt and Australian billionaire businessman Kerry Packer, while on the facing page actress Britt Ekland finds herself under World Snooker champion Alex Higgins and over another entry for Queen, then on their way to play at Milton Keynes.

And on another, Alan Whicker looks across at Spandau Ballet. The estimate for the album is £1,500-2,500.

The auction also includes a complete set of Beatles autographs – expected to fetch up to £8,000 – signed on the BOAC menu during their flight on March 10, 1965 as they returned from The Bahamas, where they had been shooting scenes for the film Help.

The sale takes place on October 29.