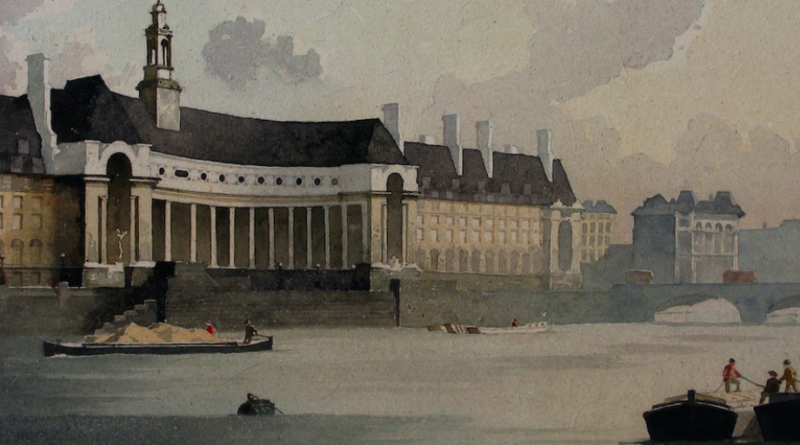 The earliest watercolour is a signed Scottish river landscape scene dated 1798 by Hugh William ‘Grecian’ Williams, before the artist’s tour of Greece 1816-18 by which he became widely known. The most recent is by Bertram Nicholls of ‘County Hall, Westminster’ dated 1955 which was exhibited at The Fine Art Society in 1958.

Highlights include a number by members of The Old Watercolour Society which was established in 1804, by David Cox Senior – a North Wales view, an extensive work by Peter De Wint of Barmouth Sands, ‘Huy on the Meuse, Belgium’ by Frederick Nash and ‘Kilchurn Castle, Loch Awe’ by John Varley.

There are two marine watercolours views off the Mumbles Lighthouse, South Wales included – an important work by Edward Duncan RWS of ‘Oyster Dredgers, Swansea Bay’ of which a similar example is with The Glyn Vivian Art Galley, Swansea and a scene depicting extensive shipping off the Mumbles by Walter William May RI.

A watercolour by the long lived William Callow RWS 1812-1908 depicts ‘Mary le Port Street, Bristol’ dated 1890 which was heavily damaged by aerial bombing in 1940 is of more local interest, as are watercolours of West Country scenes by John Henry Mole and William Williams of Plymouth.

A fully illustrated catalogue can be sent on request and the entire exhibition can be viewed on the gallery website – www.newmanfineart.co.uk.