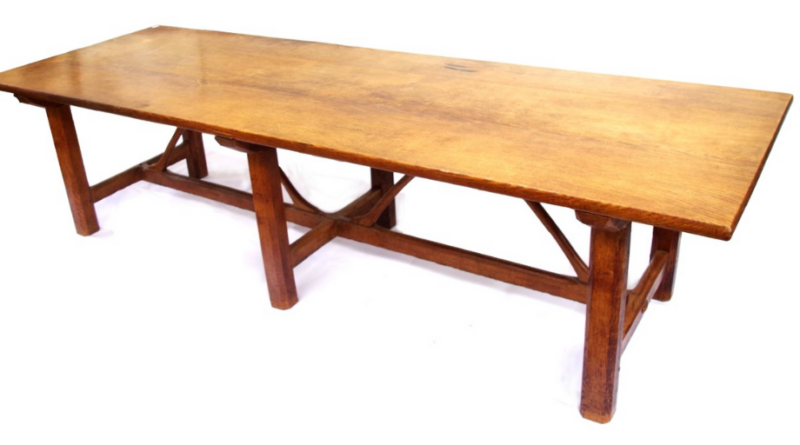 A table considered to be the jewel in the furniture crown of arts and crafts designer and architect Ernest Gimson will sell in a Norfolk auction this week.

The oak, double wishbone refectory table, designed by Gimson, will have an estimate of £25,000 to £40,000 in TW Gaze’s Special Antiques Sale on October 28.

Measures 304cm x 105cm, the auction house said the vendor cannot rehouse the piece and believes there are few precedents for similar items entering the marketplace.

Born in Leicester and ultimately qualifying at the Leicester School of Art, Ernest Gimson (1864 – 1919) was one of the most inspiring and influential designers of his age. His friend, the architect, writer and educationalist, W R Lethaby described his furniture as, ‘one kind of ‘perfect’, that is, it was useful and right, pleasantly shaped and finished, good enough but not too good for ordinary use’. 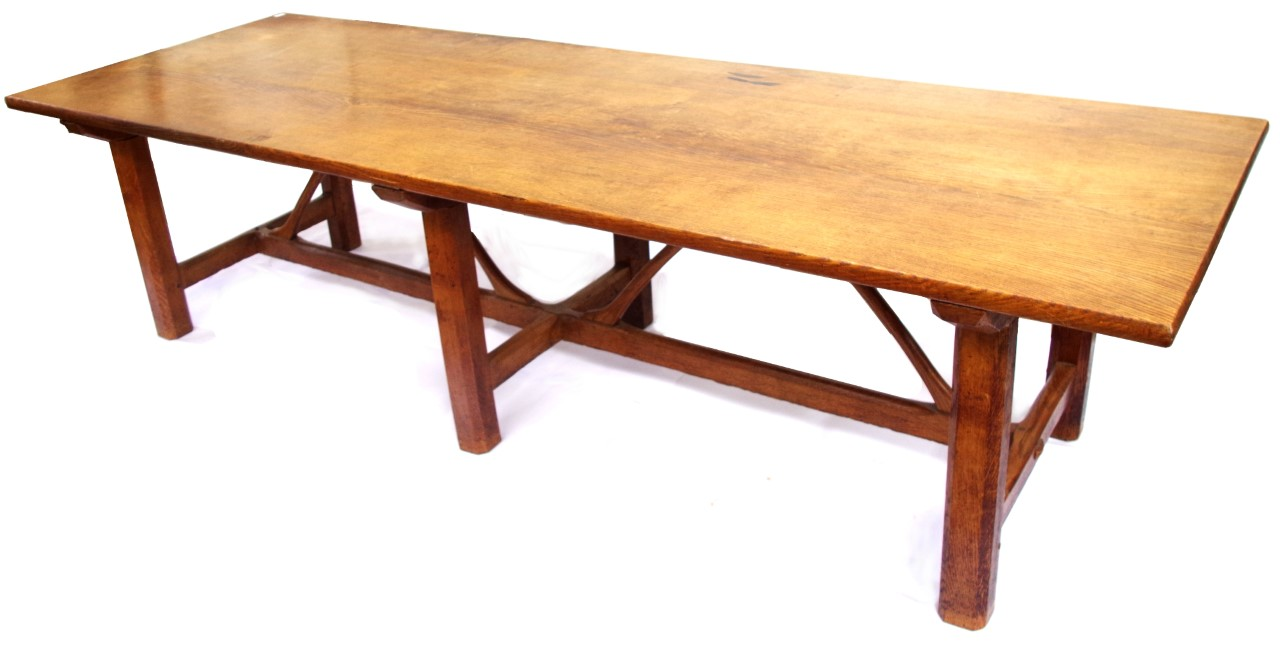 Gimson moved to London in his twenties, where he described the retail premises of William Morris’s firm, Morris and Company, in Oxford Street, as, ‘a treasure house for anyone furnishing.’ Gimson attended meetings of the Art Workers’ Guild where talks and discussions on design were a regular occurrence and in 1889, he joined Morris’s Society for the Protection of Ancient Buildings (SPAB). His closest friends in London – Lethaby, Detmar Blow and the brothers Sidney and Ernest Barnsley – were all passionate about architecture and design and they would all collaborate with him on various projects over the years.

Gimson and the Barnsley brothers moved to rural Cotswolds in Gloucestershire in 1893 in order “to live near to nature”. From their shared workshop, they were prime influencers of, and contributors to, the Cotswold School of Arts & Crafts. The relationship between Sidney Barnsley and Gimson was particularly close and many pieces of furniture made between 1895 and 1902 were collaborative efforts and Sidney Barnsley carried on producing many of the designs after Gimson’s death. 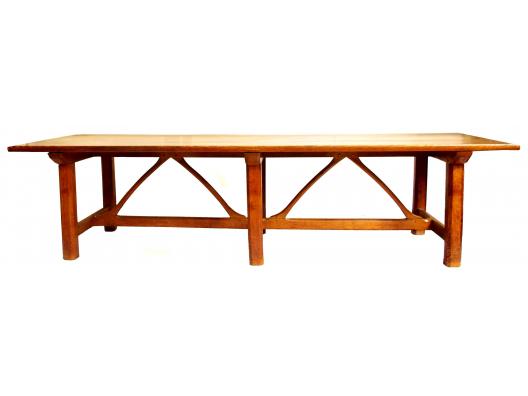 Although he is remembered primarily as a designer, Ernest Gimson always thought of himself as an architect. Moving amongst “design royalty” at the end of the Victorian era and into the Edwardian period, Gimson was involved in some pioneering projects across England.

Gimson had many clients within Norfolk, including the White family. Timothy White was the founder of Timothy White’s, the chain of regional chemists, and in 1890 he purchased Salle Park Estate, most of the village of Salle and the local derelict medieval church. Soon after moving to Salle, Major White became involved with the neighbouring Poor House of Aylsham.

By the mid 1890’s he was on the board of Guardians to the Poor House, retiring his position in 1908. Major White’s son, Sir Woolmer White, restored Salle church with the help of SPAB and architect William Weir, who approached Gimson for assistance in the restoration, particularly of the woodwork. Gimson visited Salle church and restored the nave, aisles and roof timbers. He also designed the lectern, pews and choir stalls.

Salle church is only one mile from where Aylsham Poor House stood. In 2007, a fine oak double wishbone refectory table (so-called because of the distinctively shaped braces supporting the top), designed by Ernest Gimson and removed from Aylsham Poor House (later St Michael’s Hospital) where it had been used as a boardroom table (and possibly sat at by Timothy White), was sold at auction. Wishbone tables by Gimson and or Barnsley are not uncommon, but a double wishbone construction – especially of this proportion – is very rare.

Meanwhile, Gimson and his team carried out work on Ranworth church, 1910, Woodbastwick Church and designed a butterfly plan house for Bacton, which was never built. He did, however, play a major role in the design of Happisburgh Manor, a butterfly plan house by his friend Detmar Blow, which wasbuilt, in 1900. Edward Schroeder Prior, another Arts & Crafts architect, built a series of houses following the “X”-shape of the butterfly plan, which were very popular and widely copied at the time. 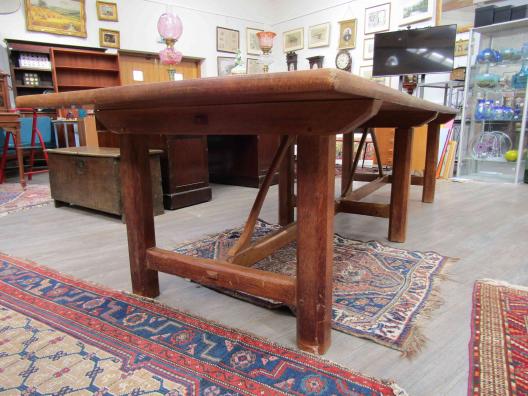 One of these was Voewood House, built for Rev. Percy Robert Lloyd and his wife in 1903 – 04, and now considered an important example of pioneering Arts & Crafts construction. Not long after completion, a TB isolation hospital was built next door, and fearing for their health, the Lloyds first quickly rented out the property and then sold it. Over the years it became known as Home Place Convalescent Home and later Thornfield Residential Home for the Elderly, High Kelling.

When the care facility was sold in about 1980/81 and returned to private ownership and its reinstated name of Voewood, contents were dispersed and disposed of. The boardroom table was bought by a ward orderly and porter who had worked there for many years. He was looking for a large table for family gatherings in his home, a converted local chapel, and as he could remember the staff sitting eating their lunch and taking coffee breaks around it, wanted to preserve some fond memories as well.

Now, his son, who grew up with the table as literally “just part of the furniture” is selling the table on. It hasn’t moved from its position for 40 years, and in order to reach the auction house, banisters and hand rails had to be removed, as did doors, including the ginormous and extremely heavy chapel front doors, which have never been off their hinges in living memory.