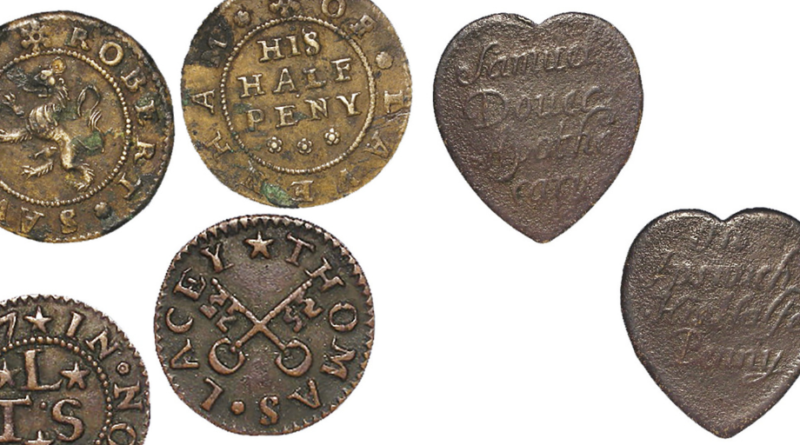 The combined political, economic and social challenges the UK currently faces have echoes of another tumultuous period in the country’s history that created a niche collecting area for today’s numismatics. Richard Ginger explores the current appeal of 17th-century trade tokens.

In the turbulent years surrounding the English Civil War, which saw England embark on a series of battles between Parliamentarians and Royalists resulting in the eventual execution of Charles I, the country’s official coinage was chaotic. Earlier in the century, the king, embroiled in political machinations as he sought to protect the royal prerogative, appeared disinterested in the provision of small denomination coinage.

Instead, he awarded contracts to his favoured attendants at court to mint farthings from base metals. Courtiers such as Lord Lennox, Lord Richmond and Lord Harrington exploited the situation by producing low denomination coins that were generally of poor quality and lightweight. The reaction from the public was perhaps inevitable as the coins were disparaged and proved highly popular.

With the death of Charles I in 1649, the victorious Oliver Cromwell declared a Commonwealth without a monarch at its head. This fundamental societal rupture also meant that the centuries-old royal prerogative to issue money of any kind was ended. No longer would anyone issuing coins face the severe consequences for breaking the law, including the death penalty. This newfound freedom, alongside the shortage of coinage due to the years of civil war and sub-standard small change still issued in the name of the new Commonwealth, soon led many local authorities, private businesses and merchants to start issuing their own tokens as a means of undertaking a wide variety of transactions.

However, this system of trade tokens was not without precedent in the country. Indeed, since medieval times many tradesmen such as ale house keepers and vintners had issued cast lead and pewter tokens to their customers.

The earliest 17th-century trade tokens, fascinating incarnations of this unofficial currency, were farthings, which generally varied in diameter from 14mm to 22mm. Within this size range, examples at the larger end were often struck by municipalities, while the smaller tokens were issued by merchants. Half pennies began to appear around 1656, while pennies were in use from 1663, mostly in Wales and the North of England.

The tokens were parochial in nature, designed to be redeemed in the shops or premises of the authorities within a local district. It is estimated that in London alone some 4,000 variations were created, making the capital responsible for a large portion of the overall 20,000 different types struck nationwide (excluding Scotland which, as a separate entity, had a government issuing a robust supply of small coinage).

While many were struck from materials such as copper or brass, others were created from the less expensive lead, pewter and even in leather. The majority of these tokens are round, although other shapes such as square, diamonds, hearts and octagonal were also made.

The actual appearance and designs on the faces of the tokens seems to have been no matter of small pride to the issuers, with many employing the services of professional moneyers, including the likes of David Ramage who was principal engraver at the Mint at the Tower of London. The work of these moneyers, which involved tools such as cut steel dies and fly presses, allowed the production of ‘coin like’ tokens for their business clients.

In an age when much of the population was illiterate, the tokens predominantly carried some form of self-explanatory pictorial device clearly related to the issuer and their trade or business. These images in the centre obverse field range from tobacco pipes and rolls of cloth, to a bible for booksellers, the head of a Turk to represent coffee houses or a sugar loaf for greengrocers.

Some of these images were puns on names, such as ‘Bull’, ‘Finch’ or ‘Lambe’, while most inns and taverns were represented by the signs that hung outside their establishment. Elsewhere, the arms of the various medieval guilds and, in the capital, the London Livery Companies, are all devices regularly seen on tokens.

A huge proportion of tokens were issued by taverns, inns and the burgeoning number of coffee houses in London, following their introduction to the capital in 1652. In particular, examples issued by merchants in London, along with a copy of Samuel Pepys’ celebrated diaries, can be veritable tokens for time travel. Many of the people the celebrated writer met and the places he frequented and subsequently recorded would also have issued trade tokens. Examples include copper farthing tokens from John Kent at the Three Tuns Tavern in Gracechurch Street, London; or the Bell Tavern in King Street, Westminster. Of the former, Pepys wrote in his diary on May 9, 1667: “…and so home, and in our street, at the Three Tuns’ Tavern door, I find a great hubbub; and what was it but two brothers have fallen out, and one killed the other.”

The types of lettering that usually appears is in the form of a basic inscription that starts at one point and continues in a clockwise direction around the token’s face. On the outer obverse this can be the name of the issuer and the address of their trade, while the centre field of the reverse side may display the token’s face value or denomination.

Alternatively, the initials of the forename and surname of the issuer is frequently found. If the issuer was married, then these letters will also include the first initial of the wife’s name.

Due to the widespread levels of illiteracy, many of the place names carried on the tokens can vary considerably in their spelling. Indeed, these were usually recorded phonetically as there was no definitive spelling of many words in the 17th century. This can mean that tokens from a variety of issuers within the same town will have the name spelled differently, such as ‘Peterborough’ in Northamptonshire, of which numerous variations have been discovered.

Elsewhere, other tokens display rhymes and humour, demonstrating that they were by no means a standardised form of currency.

Today there is an increasing interest in trade tokens in general, but especially those from the 17th century. Part of this appeal is that they are such a tangible and evocative link to the past lives of individuals that can be held in your hand.

With this interest, auction houses with a focus on numismatics are reporting that recent sales have yielded some strong results, where prices can range from hundreds of pounds to thousands for extremely rare tokens. For example, Suffolk-based Lockdales Auctioneers sold a token from a pub in the Suffolk village of Lavenham for £359. The token had markings for ‘Robert Saul’, the year date of 1669, along with ‘His Half Penny’ and an image of a lion (most likely the former Red Lion public house in the Market Place).

At Dix Noonan Webb in London, a 17th-century Fleet Street halfpenny featuring the Swedish King Gustavus Adolfus, retrieved from the Thames, sold for £2,976 – more than 10 times its estimate of £200.

However, in parallel with such sums and with a little additional research, the tokens can bring back to life the long-lost issuers and their families, along with the businesses and bustling streets in which they plied their trade. Perhaps, therein lies the true value to today’s collectors.