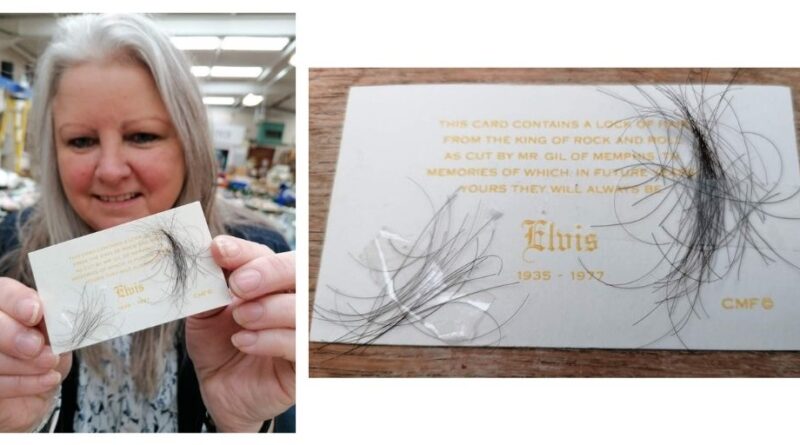 A lock of Elvis Presley’s hair, the King of Rock and Roll, could sell for thousands of pounds at auction.

A few strands of dark hair from the legendary singer, who took the world by storm in the 1950s, are set to go under the hammer in a music memorabilia sale at Hansons Auctioneers in November with a guide price of £4,000-£6,000. 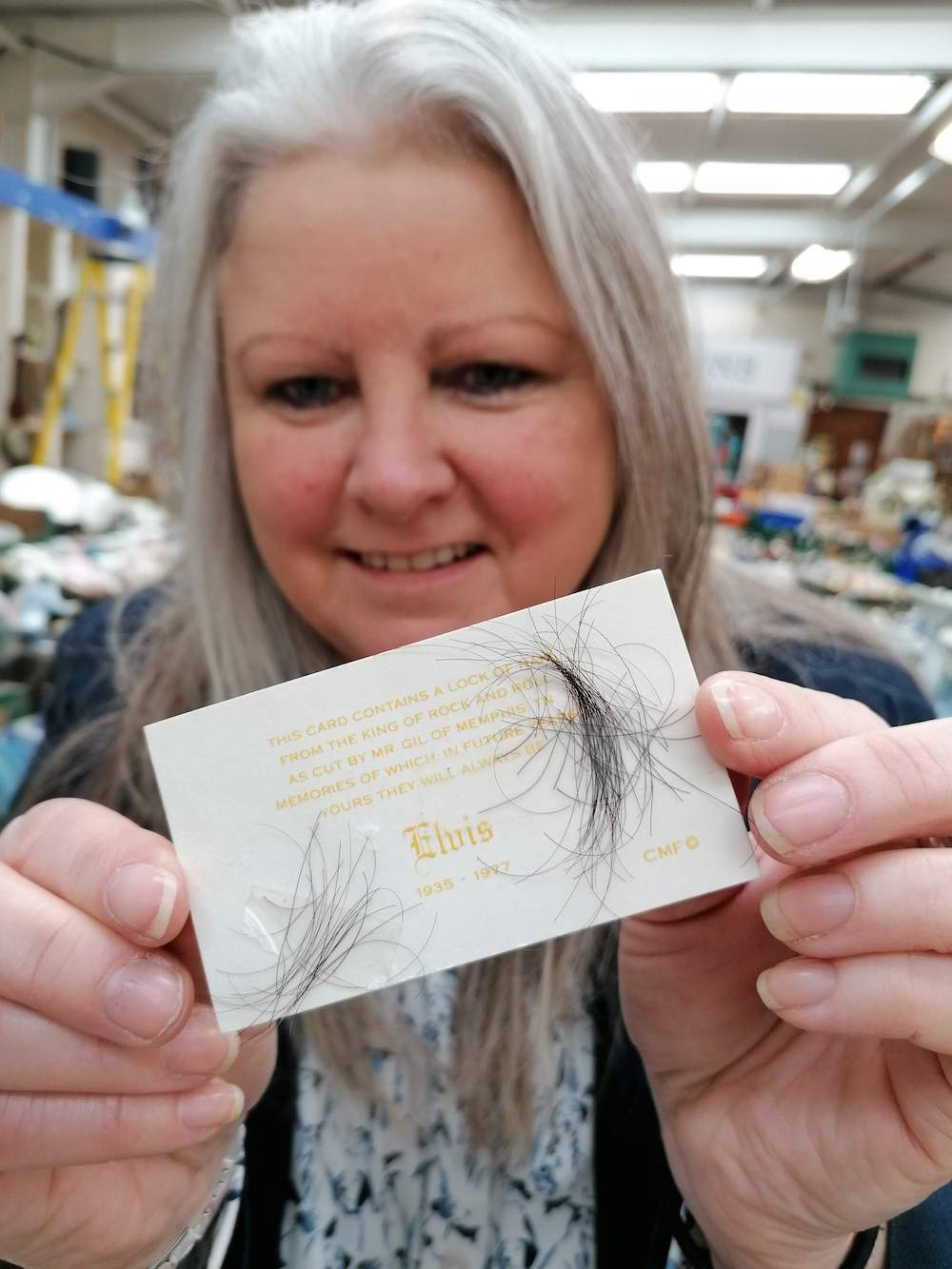 The hair was collected by one of the star’s hairdressers, Homer Gilleland, and attached to a souvenir card which states, ‘This card contains a lock of hair from the King of Rock and Roll as cut by Mr Gil of Memphis, memories of which in future years yours they will always be – Elvis 1935-1977’.

It’s being sold, together with a racquetball racquet used by Elvis, by 75-year-old lifelong fan and retired building site manager Tom Unwin, from Kidsgrove, Stoke.

He said: “I bought the hair about 10 years ago and the racquet in 2002 from a man who was running an Elvis fan club I belonged to. I have been a huge Elvis fan since I was 15. I’ve collected memorabilia all my life – everything you can imagine to do with Elvis. I’ve been to his home in Graceland, Memphis, Tennessee, a few times and met members of his band and his wife Priscilla Presley. She was fantastic.

“I’m selling now because I’ve had so much enjoyment from showing my Elvis memorabilia to friends over the years.  I would like others to experience that same enjoyment.”

According to a letter of provenance with Elvis Presley’s hair, Homer Gilleland, known as Mr Gill or Gil, got to know Elvis in the early 1950s as he used to cut his mother Gladys Presley’s hair at Goldsmith’s department store in Memphis.

The letter states: “Mr Gill cut Elvis’s hair on tour, movie sets and at Graceland. When Mr Gill went to Graceland to cut Elvis’s hair, he would wrap up the towel with this hair and, when he got home, he would take the hair and place it in a plastic bag.

“Over the years Mr Gill collected a sizeable amount of hair. After Elvis passed away, he would give a few strands to fans taped to a card. When Mr Gill couldn’t work anymore, he began to sell it.”

The letter, which explains the chain of ownership of the hair, says a baseball size amount of Elvis’s hair sold for $125,000 (£94,833). The lot also includes a copy of Homer’s Air Travel Card International, showing both his name and that of his employer, Elvis. Homer could jet off at Elvis’s expense if the star needed a haircut. 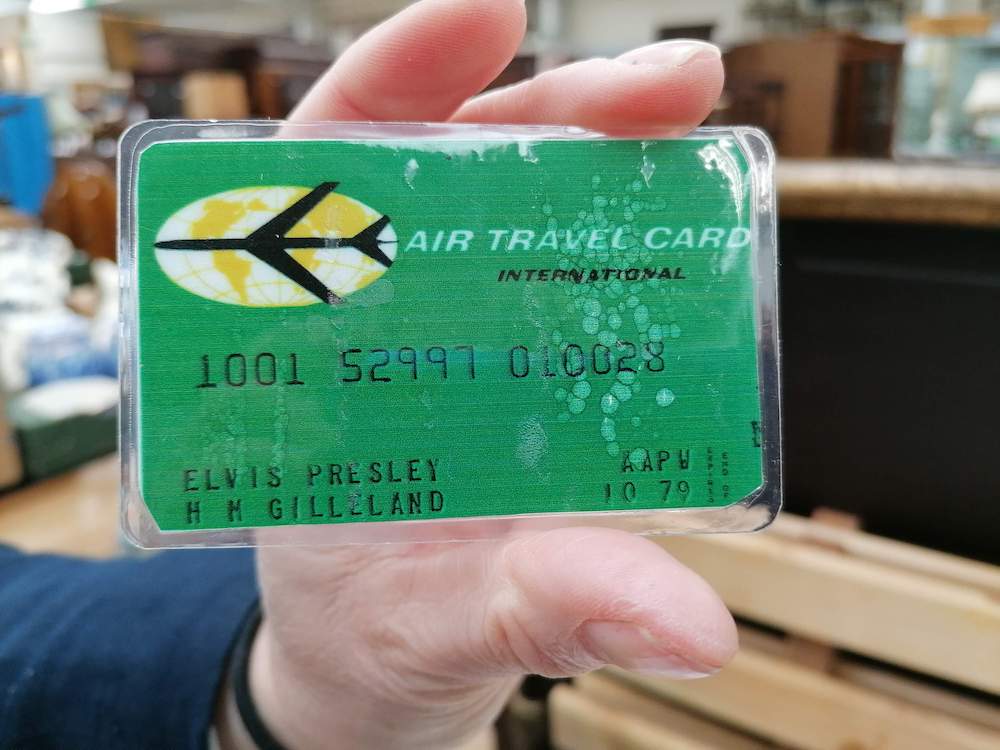 The racquetball racquet, which also has a guide price of £4,000-£6,000, comes with a letter of provenance from Lamar Fike, a member of Elvis’s famed inner circle called the ‘Memphis Mafia’.

Mr Unwin said: “When I first bought the racquet, I realised its letter of provenance was a copy and, after raising this with the seller, received a message to call Lamar in America. He was really kind and sent me a personal letter which states that the racquet was given to him by Elvis’s father the day after the star died in August, 1977. Lamar said Elvis had played many a match with it. He had a racquetball court at Graceland.”

Claire Howell, music memorabilia valuer at Hansons, said: “What incredible Elvis mementos these are, treasured by a true fan for many years. Hair has always been a wonderful keepsake as it lasts forever. For any Elvis fan, here’s an opportunity to own a little piece of the legend more than 40 years after his premature death at the age of 42.

“Elvis is the King of Rock and Roll. He was one of the most talented and charismatic singers of all time, a cultural icon of the 20th century. He had an enormous impact on the music industry and became famous as an actor, starring in many films.

“But his hair had an impact on the world, too. He was renowned for paying great attention to his famous locks, which were actually blond. At a time when men didn’t dye their hair, he used gel, hairspray, colour – whatever it took – to achieve his rockabilly look. The girls swooned and, thanks to Elvis, a hair salon for men opened in Hollywood, unheard of back then. He was a ground-breaker in more ways than one.”

Mr Unwin added: “Back in the mid-1950s we just had crooners like Perry Como then, boom, Elvis came along and changed everything – hair, fashion, dance and music.”