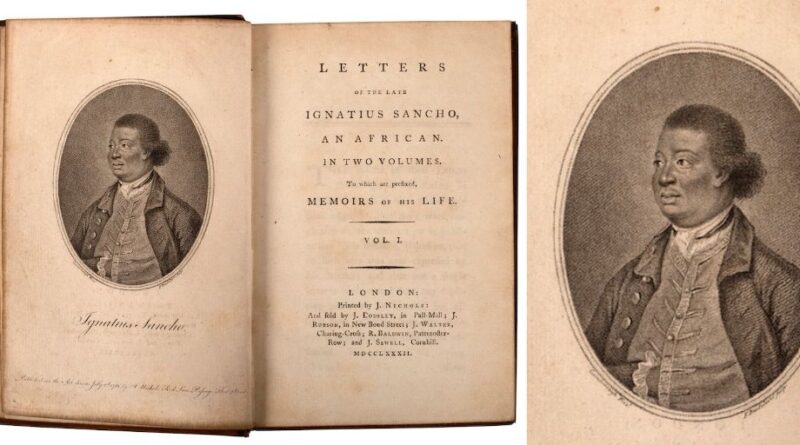 One of the earliest first-hand accounts of slavery, by the first Briton of African descent known to vote in England, is among the leading lots in Gloucestershire auction house Chorley’s January auction. The sale will also feature a large selection of books and maps dating back to the 16th Century.

The rare books in the sale include one of the earliest accounts of African slavery written in English from first-hand experience, The Letters of the Late Ignatius Sancho, an African (1782) by Charles Ignatius Sancho, published two years after his death. The British abolitionist, writer and composer was born on a slave ship (c. 1729) in the Atlantic and later sent to England, where after many years of slavery, he was able to start his own business as a shopkeeper while also writing and publishing various essays, plays and books.

Ignatius Sancho became a devout supporter of the British abolitionist movement and was the first known Black Briton to vote in England and to have an obituary published in the British press.

In 1782 Frances Crewe, one of Sancho’s correspondents, arranged for 160 letters to be published in the form of two volumes entitled The Letters of the Late Ignatius Sancho, An African. The book, expected to achieve £200-300 in the upcoming auction, became extremely popular and documents domestic life as well as the social and political unrest in 18th-century Britain. The book includes Sancho’s eye witness accounts of the Gordon Riots in June 1780 as an angry mob went past his shop on Charles Street, he recounts “the shouts of the mob, the horrid clashing of swords, and the clutter of a multitude in swiftest motion”. The protest was motivated by anti-Catholic sentiment and grew into a violent mob of 100,000 looting and burning parts of London.

Other interesting lots in the sale include: