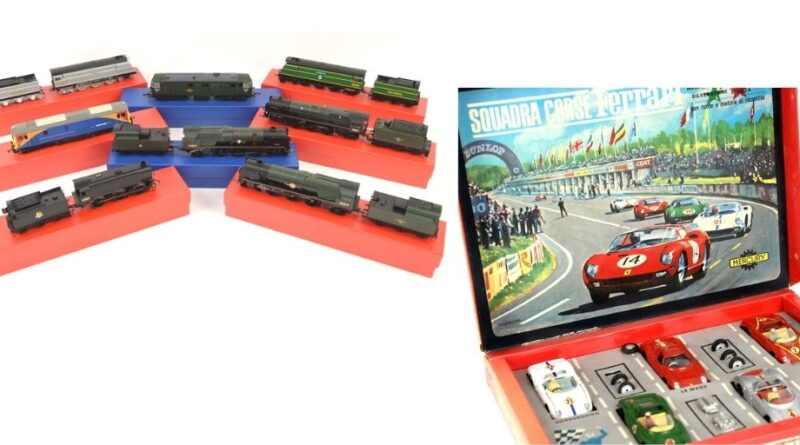 A nostalgic demand for vintage and antique toys has been reported by a Surrey auction house, with model train set proving especially popular.

Ewbank’s toy auction in late October, saw a large collection of more than 200 trains, split into group and individual lots, beat its pre-sale estimate of £10,000, with the final total, including buyer’s premium, reaching more than £33,500.

Andy Delve, from the Guildford-based auction house, commented: “It was a very good collection and largely in untouched condition, so very attractive to serious collectors, but the level of interest went way beyond even that.

“Only three days before the sale I read a national newspaper article about how orders had risen significantly at Hornby, Peco and other toy suppliers during lockdown as people reassessed how they used their time and headed back to train sets and model cars. Our auction results reflect that heightened interest.”

The next toy sale is due to take place at Ewbank’s on February 24, and the team is already taking consignments for sale.

“If you’re considering a clear out of cupboard or attics over the Christmas period, do consider getting in touch with us to arrange a valuation of any vintage toys or models as the market is strong for these items,” added Delve.

Highlights of the recent collection of model trains on sale included locomotives by Hornby, Jouef, Rivarossi, Roco, Lima, Heljan, and Bachmann. This collection was put together by a gentleman who worked on the railways for many years and carried on his passion for trains through this collection.

A great example of the trains was a lot of eight Hornby 00 gauge locomotives, which had a final price of £468. Among the eight was a Battle of Britain Class ‘Fighter Pilot’ 21C155, Merchant Navy Class ‘Brocklebank Line’, and Class 73 Bo-Bo electric diesel locomotive SouthWest Trains.

It was not just locomotives which captured buyers’ imagination as many toy cars also saw great final prices.

A Ferrari Racing Team gift set of five die-cast model Ferraris – Nurburgring, Silverstone, Le Mans, Monza and Sebring all with spare wheels and engines – in a fitted box sold for £715; and a boxed Tri-Ang Series mechanical toys Magic Sports Car No. MT4, boxed, made by Lines Bros. Ltd., also had a hammer price of £715.

Other lots of note included a Meccano set No. 10, in a four-drawer light oak chest, which sold for £572; and four Sasha dolls with various outfits, which made £494.

In this month’s Antique Collecting magazine, expert Jo McDonald presents her collecting guide to model train sets – subscribe here to get the magazine delivered to your door each month