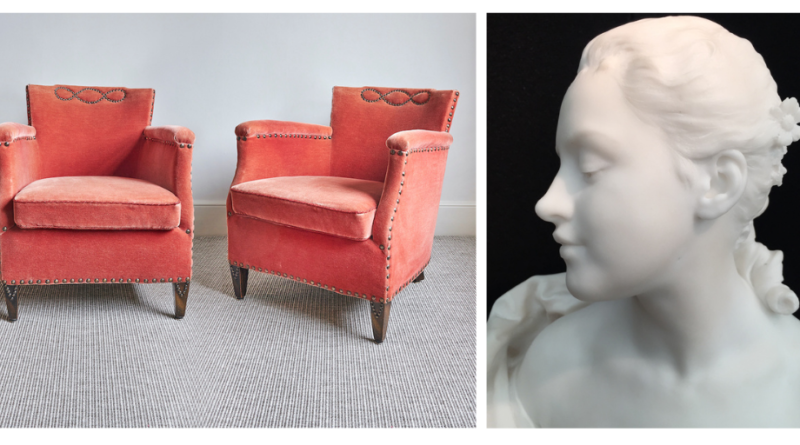 The organisers of the upcoming The Petworth Park Antiques & Art Fair said that “plans are forging ahead”.

The event, that takes place in the grounds of Petworth House in Petworth, West Sussex, is due to take place from May 7 to 9.

Dealers are currently signing up and are keen to exhibit, the organisers said.

One first-time exhibitor at this fair is campaign furniture specialist Christopher Clarke Antiques from Stow-on-the-Wold in the Cotswolds.  Burton Antiques is heading south from Yorkshire to join the other 55 exhibitors.

The retailers in the market town of Petworth are great supporters of the event, led by the Petworth Business Association, as the fair brings a lot of extra business to the shops and galleries, as well as hotels, restaurants, pubs and cafés over the three days.

Local exhibitors include Augustus Brandt, Ottocento and Rountree Tryon Galleries, the latter putting on a special exhibition within its Petworth gallery to coincide with and encourage people clients and potential customers at the fair.

Ceramics sold well last September, which has obviously influenced Julian Ede Antiques’ decision to return, having been a new recruit last September. Tom Rooth Fine Art is exhibiting again having completely sold out of his contemporary handmade, hand-finished and signed Oceanic Collection of tableware, bringing new designs, like Prawnography and Salmon Spiral this May, as well as fine art.

Petworth Park regular, Jupiter Antiques, has a rare fine example of a very early Worcester snake in a basket pattern teapot and cover not normally found in such good condition, c. 1753-55.  S&J Abbott Ceramics Plus brings a pair of Bow figures, depicting male and female gardeners, each clutching large colourful floral garlands, circa 1765, £1,250 the pair. A similar pair can be found in the Cincinnati Museum, USA.

Animals are always popular and Blackbrook Gallery has a naïve painting Fat Shorthorn Heifer by William Henry Davis, an important artist recording the images of the famous prizewinning farm animals during the 19th century. WH Davis’s patrons included Lord Spencer, Lord Berwick, Thomas Cope and Queen Victoria, who commissioned four paintings.  Farm livestock of the time was fed to become very large, as fat was as an important commodity being used for lubrication, fuel and food for the workers leaving the land to work in the factories of the industrial revolution.  Amongst the animals on the S&J Abbott Ceramics Plus stand is a very rare miniature, toy size, Rockingham figure of a foxhound on a pink and gilt cushion, £650.

Walton House Antiques from Mere in Witshire returns with a late 17th century oak geometric oak coffer with ebony and holly bandings, £1,675. Tim Saltwell brings an Edwardian mahogany and satinwood crossbanded bureau of small proportions, circa 1900, £1,450 and an outstanding William and Mary period olivewood oyster veneered chest of drawers, circa 1690, £13,500.

BBC Antiques Roadshow clock expert, Richard Price keeps ticking along, as does Timewise with vintage watches for him and her. Greenstein Antiques has an original thirties’ Rolex Precision wristwatch, £5,950 and an old cut 3 carat diamond three stone ring, £21,950.

Jewellery is always very popular and fellow London jewellery specialist Shapiro & Co has a platinum and 15 carat yellow gold, aquamarine, diamond and seed pearl stone set pendant, circa 1900, £6,750. T Robert has taken part in most of The Antiques Dealers Fair Limited’s fairs. For this May, he plans to bring an exceptional German 18 carat five colour gold snuff box by Charles Collins & Sons, Hanau, circa 1820, priced at £9,500 and an extremely rare engraved silver gilt articulated fish pendant containing a cut glass perfume bottle with ruby stopper and a silver & gold miniature spoon, circa 1780, £3,800. Other specialities for sale include silver, glass and sculpture.

Organiser, Ingrid Nilson of The Antiques Dealers Fair Limited, said: “Last year, we were fortunate enough to be granted permission to hold the fair in September by the National Trust and the local council, so we know how to put all the necessary safety measures in place and are supported by the enormous work and help from Petworth Marquees; our security team, who brought the latest technology to help ensure we held a very safe event, our other supporters, the dealers and my team, all of whom loved the opportunity to be outside in the good weather interacting with each other.”

She continued: “We had wide one-way gangways, masks were worn; and we adhered to test and trace. Our visitors were really understanding; some had to queue at busier times, but everyone was so happy that the fair was taking place. Basking in sunshine, it had a really jolly atmosphere. Our caterers, Wise Catering, worked hard to ensure we had socially distanced outside table and chairs, so visitors could enjoy take-away refreshments including delicious cakes whilst overlooking the wonderful ‘Capability’ Brown scenery and impressive house, some also enjoying a Brilliant gin.  People were able to visit the mansion and its national treasures, provided they booked in advance.“